The deposition of molecular species onto the surface is referred to as adsorption. Surface phenomena include physisorption and chemisorption. They are both exothermic in nature. Pressure swing adsorption is a method that separates individual gases from a gas mixture. Desorption is the process of removing adsorbents from the surface of the adsorbate. Adsorption of gases such as hydrogen, nitrogen, and so on the surface of adsorbents such as charcoal is an example of physisorption.

The deposition of molecular species onto the surface is referred to as adsorption. It is not the same as absorption, which is a physical or chemical process in which atoms, molecules, or ions enter a bulk phase.

It is an exothermic process, which implies that energy is released during it. Enthalpy is the quantity of heat that is released when one mole of adsorbate is adsorbed on an adsorbent. The enthalpy change is indicated as negative. The reason for this is that when adsorbate molecules are adsorbed on the surface, their freedom of movement is constrained, resulting in a decrease in entropy. Adsorption happens spontaneously at constant temperature and pressure.

Adsorption is typically a surface phenomenon, with the greatest illustration being the drying of air in the presence of silica gel. Water molecules are adsorbed on the gel’s surface during this process.

Adsorption is categorized into two categories based on the material being deposited and adsorbed:

Adsorption of gases such as hydrogen, nitrogen, and others on the surface of adsorbents such as charcoal is a common example of physisorption.

The surface area of the adsorbent influences physisorption. The amount of adsorption rises with increasing surface area. Finely split metals and porous substances, for example, have a huge surface area. As a result, they are regarded as excellent adsorbents. It also relies on the adsorbate’s composition (the accumulation of molecular species or substances at the surface).

Difference Between Physisorption And Chemisorption

PSA, or pressure swing adsorption, is a method that separates individual gases from a gas mixture. PSA is a non-cryogenic air separation method that is widely utilized in industry.

First, air from the surrounding environment is compressed into high-pressure air. This gas is then transported to a tank or column containing the adsorbent material (activated carbon, zeolite, etc.). The adsorbent used is determined by the gas to be extracted. This system is then cyclically pressurized and depressurized, with the low sorbing gas leaving the column first, followed by the other gases.

Adsorption begins with the adsorber being pressured with pure gas. The polluted gas is introduced into the column containing the adsorber. Adsorption occurs, and the pure gas is discharged from the column’s top. This continues until the adsorber’s adsorption capacity is achieved.

The adsorber is depressurized in modest increments to recover any remaining pure gas in the adsorber. The desorbed impurities are deposited into the PSA off-gas line once all pure gas has been collected.

The adsorber is repressurized with pure gas and is now ready to receive more feed gas to restart the operation. 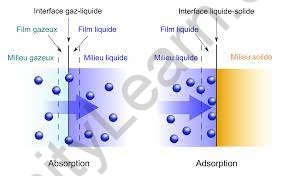 What are the similarities between physisorption and chemisorption?

Surface phenomena include physisorption and chemisorption. They are both exothermic in nature. They both rise as the surface area increases. And both are related to a decrease in entropy.

Is there a difference between adsorption and absorption?

What is Surface Chemistry?

Surface chemistry refers to the chemical reactions or chemical changes that occur on the plane's two surfaces. In surface chemistry, the interface of two phases can be solid-gas, solid-liquid, liquid-gas, and so on. It is entirely dependent on the compounds or components that are involved in the reaction or changes. It has a wide range of uses, including analytical work, the medical profession, the paint business, and so on. It includes a wide range of processes like absorption, catalysis, colloids, emulsions, and many more.