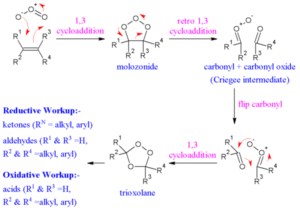 Ozonolysis is an organic process in which alkenes are oxidised. When an alkene solution is subjected to ozone in the presence of an inert solvent, ozonide is produced, which, when hydrolyzed, provides cleavage products such as aldehydes and ketones. This reaction is extremely useful for determining the location of a double bond in aliphatic alkenes.

Ozonolysis is a chemical process that includes the breaking of unsaturated bonds using an ozone molecule. Unsaturated molecules such as alkenes and alkynes are examples of chemical compounds that undergo ozonolysis. Azo compounds with the diazenyl functional group are also ozonolysis.

Ozone is a highly reactive isotope of the oxygen atom. Unsaturated chemicals suffer oxidative cleavage in the presence of ozone molecules. The compound’s unsaturated bonds are replaced by C-O bonds, resulting in an intermediate complex known as the ozonide. To eliminate oxygen from the intermediate ozonide molecule, it is exposed to zinc dust. Carbonyl compounds are formed when oxygen is removed from the ozonide.

Three phases are involved in the ozonolysis reaction process.

Three oxygen atoms make up the ozone molecule. One oxygen atom becomes somewhat negative, while the other becomes partially positive. The double-bonded carbon atom is attacked by the negatively charged oxygen ion. The ozone molecule binds to the reactant. Within the structure, rearrangement occurs, resulting in the development of an intermediate structure known as molozonide.

Step 2: Synthesis of an ozonide intermediate

Alkenes have one pi bond. In the presence of an ozone molecule, the double bond of alkenes undergoes oxidative breakage. When alkenes are oxidised, they produce end products such as ketones, aldehydes, alcohols, and carboxylic acids.

Consider the following example to better understand the mechanism of ozonolysis in an alkene.

In the presence of ozone molecules, the alkene undergoes ozonolysis. One of the three oxygen atoms in the ozone molecule has a positive charge, while the other has a negative charge. One end of the carbon-carbon double bond is attacked by the negatively charged oxygen atom. The positively charged oxygen atom is attacked by the opposite end of the carbon-carbon double bond. Molozonide is formed as a result of the formation of a cyclic structure. Molozonide is extremely unstable. Carbon atoms are still held together by a single bond in molozonide. Molozonide then rearranges itself to generate ozonide, a rather stable intermediate. The connection between two carbon atoms is broken in the ozonide intermediate.

Consider the following example to better understand the reaction process of ozonolysis in an alkyne.

In the presence of ozone molecules, the alkyne undergoes ozonolysis. One end of the carbon-carbon triple bond is attacked by the negatively charged oxygen atom. The positively charged oxygen atom is attacked by the opposite end of the carbon-carbon triple bond. A carbon-carbon double bond is created as an intermediate. This intermediate is unstable, and it undergoes further rearrangement. A stable ozonide is formed when the double bond between two carbon atoms is broken. We can observe that the triple bond is reduced to a single bond in ozonide. Later on, the single bond between two carbon atoms breaks, resulting in the formation of a diketone molecule. The diketone molecule is hydrolyzed further, resulting in the production of two carboxylic acids.

Cracks are formed when ozone (which is present at tiny levels in the environment) attacks the elastomer. The ozone attacks the double bond in the rubber chain here. Ozone fractures appear when the rubber product is under strain. Because the fractures are positioned at right angles to the axis of strain, they might form around the perimeter of a bent rubber tube. When fractures creep inside from the exposed outside surface of fuel pipelines, they are exceedingly hazardous. This might result in gasoline leaks and fires.

What exactly is ozonolysis, and how does it work?

Ozonolysis is an organic process in which alkenes are oxidised. When an alkene-containing solution is exposed to ozone in the presence of an inert solvent, ozonide is generated, which may then be hydrolyzed to produce cleavage products such as aldehydes and ketones. In aliphatic alkenes, this reaction is highly useful for determining the location of a double bond.

Which ozonolysis reference books should one consult?

When studying ozonolysis for JEE, one should read part 2 of the NCERT class 11th chemistry textbook. A quick tour through this topic from NCERT not only offers you a good sense of the numerous topics you'll need to learn for the JEE syllabus but also helps you improve the chapter's basics. Authors such as Solomons & Fryhle, Morrison & Boyd, and others have written works that can help you comprehend the mechanics of a reaction. You can practise questions on this topic from books by writers like MS Chauhan once you've acquired notions on the subject.

What is the purpose of zinc in ozonolysis?

To avoid further oxidation of the chemical, zinc dust is utilized in ozonolysis. Zn stops the reaction in its tracks by preventing the molecule from forming additional bonds with oxygen.