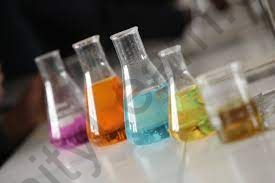 Chemistry is very much a part of our daily lives. You’re a giant bag of chemicals yourself! The number of applications we make of the torturous equations from chemistry class in our daily lives is astounding.

Your body is mainly water, which is made up of hydrogen and oxygen. Six elements make up over 99 percent of the mass of the human body: oxygen, carbon, hydrogen, nitrogen, calcium, and phosphorus. Only 0.85% of the total is made up of the following five elements: potassium, sulphur, sodium, chlorine, and magnesium. All are required for survival.

Chemical messengers, particularly neurotransmitters, are responsible for the feelings you experience. Chemistry underpins love, jealousy, envy, infatuation, and infidelity. Higher than average amounts of norepinephrine produce sweaty hands and a thumping heart in infatuation. Meanwhile, a rush of phenylethylamine and dopamine causes the ‘high’ of being in love.

We use soaps and detergents every day when we wash our clothes. Chemical compounds are used to make these soaps and detergents. Soaps are sodium or potassium fatty acid salts that are made by hydrolyzing lipids in a chemical reaction known as saponification. Each soap molecule has a lengthy hydrocarbon chain, referred to as the ‘tail,’ as well as a carboxylate ‘head.’ Sodium and potassium ions float free in the water, leaving a negatively charged head. Because of its capacity to operate as an emulsifying agent, soap is a good cleanser. An emulsifier is a substance that can disperse one liquid into another that is incompatible. While oil (which draws dirt) does not naturally combine with water, soap can suspend oil/dirt in a way that allows it to be removed.

As innocuous as they appear, when chopped, they may make you cry rivers. This water has a chemical cause for its presence. When you chop an onion, the cells are broken apart, allowing the contents to escape. Sulfenic acids are made up of amino acid sulfoxides. Separated enzymes can now react with sulfenic acids to generate propanethiol S-oxide, a flammable sulphur molecule that wafts upward toward your eyes. Sulfuric acid is formed when this gas combines with the water in your tears. The sulfuric acid irritates your eyes, causing them to produce additional tears to wash the irritation away. This water, it appears, aids in the removal of debris from your eye.

Sunscreen works by filtering or blocking the sun’s damaging UV rays to prevent sunburn, skin cancer, or both. Do you have a good understanding of how sunscreen works and what an SPF rating means? Sunscreen is a mixture of organic and inorganic substances that filter the sun’s rays so that less of it reaches your skin’s deeper layers. Some light gets through, just like a screen door, but not nearly as much as if the door wasn’t there. Sunblock, on the other hand, scatters or reflects the light away from the skin, preventing it from reaching it.

Q. What is the difference between analgesics and tranquillizers?

Ans: Analgesics and tranquillizers are those drugs which act on the nervous system. They actually affect the message transmission that happens from nerves to receptors.

Analgesics are chemicals which reduce physical pain. On the other hand, tranquillizers help in the treatment of stress, and mild or severe mental diseases. Tranquillizers enhance the mood of a person which helps in inducing a feeling of well being. Therefore, stress and tension are reduced. Psychiatrists prescribe a pain killer which contains tranquillizers in order to induce sleep.

What exactly are antifertility medications?

Antifertility medicines are hormones that are synthesised. The mucus in the cervix thickens when progesterone pills are taken. It is extremely difficult for sperm to penetrate the uterus and fertilise the egg as a result of this. As a result, the chances of becoming pregnant are reduced. Progesterone is a hormone that prevents women from getting pregnant. The following are some of the advantages of antifertility drugs: