Whenever an object moves in a circular path, it undergoes rotational motion about an axis of rotation. Circular motions include, for example, a race car speeding around a circular curve, a toy attached to a string swinging in a circle, or the circular loop-the-loop on a roller coaster. Some other example is a wheel turning on its axle, the spin of a tornado on its path of destruction, or a figure skater spinning during an Olympic performance.

The phrase “speed” is being used in a variety of contexts. For example, how fast you drive your car or how quickly you pitch a ball. Likewise, speed refers to how slowly or quickly an object moves. Thereby, angular speed is the rate at which an object rotates. It really is defined as the change in the object’s angle per unit of time.

As a result, if we want to calculate the rotational motion’s speed, we will need to know its angular speed. The angular speed formula computes the distance travelled by the body in terms of revolutions or rotations per minute.

Moreover, radian is an important concept in this context. Once we calculate angular speed, we measure the angle in radians. Radians are a unit of measurement for angles in which the right angle is defined as pi/2 radians. As a result, one full revolution contains approximately 6.28 radians. 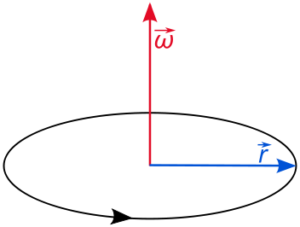 We could see that angular speed is the rate at which an object changes its angles in radians over a given time. Angular speed only has a magnitude (a value).

ω = the angular speed in radians/sec

It really is worth noting that angular velocity and angular speed are calculated using the same formula.

The dimensional formula of angular speed can be represented as:

It is known that π is a dimensionless quantity.

Now, when substituting equation (2) in equation (1) we get,

What do you mean by angular speed and linear speed?

Generally, the angular speed of an object has been measured in units such as revolutions per minute, degrees per second, radians per hour, and so on whereas the linear speed is said to be the rate at which a point on the object's edge travels in its circular path around the object's centre.

What is the dimensional formula of angular speed?

Angular speed has been dimensionally represented as M0 L0 T-1.

Now you can find answer to all your subject queries & prepare for your Exams on our test preparation app – Infinity Learn.