The distribution of mass within Earth or another celestial body determines the value of gravity’s attraction or potential. As previously stated, the form of the surface on which the potential remains constant is determined by the distribution of matter. Geodesy, which studies the form of the Earth, and geophysics, which studies its underlying structure, both require gravity and potential measurements. It is better to measure the potential from the orbits of artificial satellites for geodesy and global geophysics. Local geophysics, which deals with the structure of mountains and oceans as well as the hunt for minerals, benefits from surface gravity data. 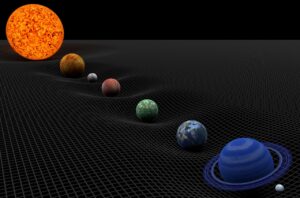 The acceleration due to gravity is given by g=Fm, where F= force exerted by the earth on an object of mass m. 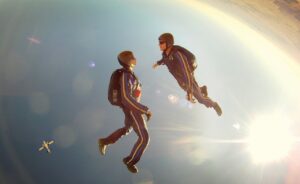 Free-falling objects are not affected by air resistance.

On Earth, all free-falling objects accelerate at 9.8 m/s (commonly estimated as 10 m/s for making calculations easy).

Variation in the value of g:

F= force exerted by the earth on an object of mass m.

Variation due to Height from the surface of the Earth :

Let us assume that an object is placed at a distance h above from the surface of earth.

Therefore, the gravitational force experienced by the body can be written as

One point that’s worth noting here is, as we go up the value of g decreases.

Let’s rewrite the above written equation as,

Now, let us assume another scenario. Suppose one goes distance h inside the earth. In this case, as well the value of g will decrease.

Force can be written as,

Example: Compute the value of the acceleration due to gravity at

Solution: Value of g at a height h is ,

Value of g at a depth h is written as ,

Variation in g (Changes with time):

The gravitational potential at Earth’s surface is primarily due to the planet’s mass and rotation, with minor contributions from the distant Sun and Moon. Because such little contributions vary with time as the Earth rotates, the local value of g varies somewhat. The diurnal and semidiurnal tidal variations are as follows. For most purposes, all that is required is to know the variation of gravity over time at a fixed location or the variations in gravity from one location to the next; the tidal variation can then be eliminated. As a result, practically all gravity measurements are relative comparisons of variations from one location to another or over time.

Why is it that the acceleration due to gravity is greatest at the Pole?

Why does an astronaut feel as if he or she is weightless?

Because there is no ground or normal force to oppose the force of gravity, an astronaut orbiting the Earth feels weightless. As a result, the astronaut is plummeting. However, because the astronaut is moving so quickly, he or she is constantly falling around the Earth rather than colliding with it.

What's the difference between weightlessness and freefall?

The impact of gravity is nullified by the inertial (e.g., centrifugal) force arising from the orbital flight, resulting in weightlessness when in free-fall. Zero gravity is a word that is frequently used to describe such a situation. True weightlessness, with the exception of spaceflight, may only be experienced for a small period of time, as in an airplane flying in a ballistic (i.e., parabolic) course, whereas In mechanics, free-fall is the state of a body that moves freely in any direction in the presence of gravity. In the gravitational field of the Sun, the planets, for example, are in free fall.

Define Acceleration due to gravity.