Acid rain also referred to as simply deposition is a general term that relates to any precipitation that contains acid content, like sulfuric or nitric acid, and dropped to the ground in moisture conditions from the atmosphere. This would include acidic rainfall, snow, mist, hail, or perhaps even dust. The pH of most water, even drinking water, is neutral, ranging from 6.5 to 8.5, while acid rain has a pH that is lower, ranging from 4-5 on average. The lesser the pH of acid deposition, the more acid it is. Plants, aquatic animals, and infrastructure can all be harmed by acid rain.

Acid rain has been found to have negative effects on forests, freshwaters, and soils, killing bacteria, insects, and aquatic life-forms, peeling paint, corroding steel structures such as bridges, and weathering stone buildings and statues, as well as affecting human health.

Gases that cause acid rain 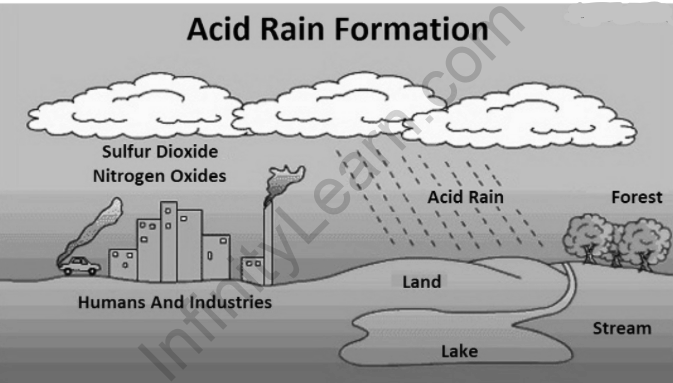 One of the most important stages in minimizing acid rain is to control the anthropogenic origins of acid rain by limiting industrial and automobile emissions. Interventions in policy to limit such emissions are urgently needed. Furthermore, renewable energy sources can help to minimize acid rain by reducing emissions.

Significance of acid rain and its reactions on NEET exam

Science is a subject that requests a strong understanding of points to finish board tests and other cutthroat tests. Getting ready for a subject without sufficient review materials and arrangements, then again, can challenging. Thus, alluding to science answers or rehearsing from these materials will help understudies in getting great scores on the NEET test. The models in general and inquiries in Infinity Learn to depend on the CBSE prospectus, and there is a potential that indistinguishable inquiries will show up in the test. The significant objective of the arrangements is for students to have the option to self-dissect their shortcomings and progress around there.

When sulphur dioxide and nitrogen oxides are discharged into the air, a chemical reaction occurs, resulting in acid rain. These substances can ascend to great heights in the sky, where they mix and react to form oxygen and other molecules to produce more acidic pollutants, known as acid rain.

Why is acid rain so dangerous?

Forests can be severely harmed by acid rain. Acid rain that seeps into the earth can dissolve nutrients that trees require to thrive, such as magnesium and calcium. Aluminium is liberated into the soil as a result of acid rain, making it more difficult for trees to absorb moisture.

What will occur if we don't take action to prevent acid rain?

The main chemicals that cause acid rain are sulphur dioxide and nitrogen oxide. Because acid is found in fruits, vegetables, and animals, it can have an impact on humans. In other words, if acid rain does not stop and we eat such products, we may become seriously ill. Men are affected by acid rain in general, but not directly.