Nuclear binding energy is the minimum energy required to disassemble an atom’s nucleus into its constituent protons and neutrons, known collectively as nucleons in experimental physics.

Because the nucleus must gain energy for the nucleons to move apart from each other, the binding energy for stable nuclei is always positive. The strong nuclear force attracts nucleons to one another.

Nuclear binding energy is a negative number in theoretical nuclear physics. It represents the energy of the nucleus relative to the energy of the constituent nucleons when they are infinitely far apart in this context.

The experimental and theoretical perspectives are equivalent, with a slight difference in emphasis on what the binding energy means. An atomic nucleus has a mass that is less than the sum of the masses of its free constituent protons and neutrons.

The Einstein equation, E=mc², can be used to calculate the mass difference, where E is the nuclear binding energy, c is the speed of light, and m is the mass difference. This missing mass’ is referred to as the mass defect, and it represents the energy released when the nucleus is formed. The term “nuclear binding energy” can also refer to the energy balance in processes where the nucleus splits into fragments made up of more than one nucleon.

If new binding energy becomes available when light nuclei fuse (nuclear fusion) or heavy nuclei split (nuclear fission), this binding energy can be released in either process. This energy could be converted into nuclear energy and used to generate electricity, as in nuclear power, or in a nuclear weapon.

Excess energy is emitted as gamma rays and the kinetic energy of various ejected particles when a large nucleus splits into pieces (nuclear fission products).

As a result, the net binding energy per nucleon is proportional to the atomic number. Because a nucleus is made up of neutrons and protons, there are repulsion forces between the protons’ positive charges. Binding energy is required to hold nucleons together as a nucleus. 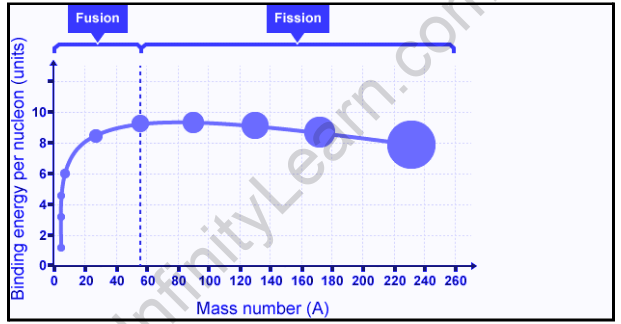 Iron, with a mass number of 56, is one of the most stable elements. Iron is said to have a high binding energy per nucleon.

Elements with lower and higher mass numbers per nucleon have lower and higher stability. A nucleus’ total mass is less than the total mass of the nucleons that make up the nucleus. The bulk defect is the term for this disparity. Using E=mc², it is equivalent to the nucleus’s binding energy. Fission is the process by which an unstable nucleus is converted into more stable nuclei with a lower total mass.

There is always a mass difference between the calculated and original masses of a nucleus; this mass difference is converted into energy, which is known as the binding energy.

The calculated mass is the sum of the masses of the number of protons and neutrons present in a given nucleus. The binding energy is calculated by multiplying the mass difference by c2.

A nucleus’ calculated mass is,

(A-Z) denotes the number of neutrons in the nucleus.

The proton’s mass is denoted by mp.

The neutron’s mass is denoted by mn.

The mass difference is the difference in mass between the calculated and experimental masses.

The binding energy per nucleon is calculated as follows:

It is uncommon for the average person to look at a piece of wood and wonder how much energy it will take to split the log in half, but for a physicist, this is a critical question.

The binding energy (B.E.) of the nucleus is the amount of energy required to completely disassemble the nuclei into separate protons and neutrons.

The BE of the nucleus can be calculated using the rest mass. The missing mass is represented by the mass defect, and Einstein’s equation E=mc2 provides energy related to this missing mass.

Einstein’s famous relationship connects the two. The mass of the bound system is lower than that of its members. When the nucleons are more tightly bound together, the mass of the nucleus decreases.

The energy expended in separating the nucleus into its constituent protons and neutrons causes the system’s mass to increase. The work required to disassemble the nucleus is equal to the binding energy (BE). Abound system has less mass than the total sum of its parts, which is especially noticeable in nuclei, where energies and forces are enormous.

The binding energy is, by definition, equal to the input energy. When the pieces are separated, they are at rest; the total rest mass grows as the energy put into them grows when compared to their glued together state as the nucleus. As a result, the mass increase is,

Weighing a particle combination that includes extra energy, such as a TNT molecule, exposes some excess mass when compared to its end products following an explosion. (Because the excess mass must leave as heat before it can be identified, the final products must be weighed after they have been halted and cooled.) When energy is required to separate a system of particles into its constituents, the starting mass of the constituents is less than the final mass.

The injected energy is “stored” as potential energy in the latter instance, which manifests as a mass increase in the components that store it. In general, very light elements can fuse relatively easily, and very heavy elements can easily break up via fission; elements in the middle are more stable, and it is difficult to induce either fusion or fission in a laboratory environment.

Ans: If the binding energy is positive or zero, the nucleus will separate and escape into space; thus, it is negative.

Why Does an Increase in Binding Energy Cause Energy to Be Released?

Nuclear binding energy is released when protons and neutrons interact to form bonds. The binding energy gives up a large amount of energy as the number of nucleons increases.