In chemistry, the term transition metal (or transition element) can refer to one of three things: A transition metal, according to the IUPAC definition, is “an element whose atom has a partially filled d sub-shell or which can give rise to cations with an incomplete d sub-shell.” ” Many scientists consider any element in the d-block of the periodic table, which includes groups 3 to 12, to be a “transition metal.” The lanthanide and actinide series of the f-block are also transition metals and are referred to as “inner transition metals” in practise.

Cotton and Wilkinson specify which elements are included in the brief IUPAC definition (see above). They add scandium and yttrium in group 3 to the elements from groups 4 to 11, which have a partially filled d sub-shell in the metallic state. Lanthanum and actinium, both of which are classified as group 3 elements, are, however, classified as lanthanides and actinides, respectively. The term transition was first used in this context in 1921 by English chemist Charles Rugeley Bury (1890–1968), who referred to a transition series of elements during the change of an inner layer of electrons (for example, n = 3 in the fourth row of the periodic table) from a stable group of 8 to one of 18, or from 18 to 32.

The recent (though disputed and thus far unreplicated independently) synthesis of mercury(IV) fluoride (HgF 4) has been interpreted by some to support the view that group 12 elements should be considered transition metals, but some authors still regard this compound as exceptional. Copernicium is expected to be able to use its d-electrons for chemistry because its 6d sub-shell is destabilised by strong relativistic effects due to its extremely high atomic number, and as such, it is expected to exhibit transition-metal-like behaviour when it exhibits higher oxidation states than +2.

Any of several chemical elements that have valence electrons—that is, electrons that can participate in the formation of chemical bonds—in two shells rather than just one. While the term transition has no specific chemical meaning, it is a convenient name for distinguishing the similarity of the atomic structures and resulting properties of the elements so designated. They are located in the middle of the long periods of the periodic table of elements, between the groups on the left and the groups on the right.

The 24 elements in question have the most striking similarities in that they are all metals and that the majority of them are hard, strong, and lustrous, have high melting and boiling points and are good heat and electricity conductors. Because the range of these properties is wide, the statements are comparative to the general properties of all the other elements. Many of the elements are important in technology: titanium, iron, nickel, and copper, for example, are used in structural and electrical technology. Second, transition metals combine to form a variety of useful alloys with one another and with other metallic elements. Third, the majority of these elements dissolve in mineral acids, though a few, such as platinum, silver, and gold, are referred to as “noble,” meaning they are unaffected by simple (nonoxidizing) acids. 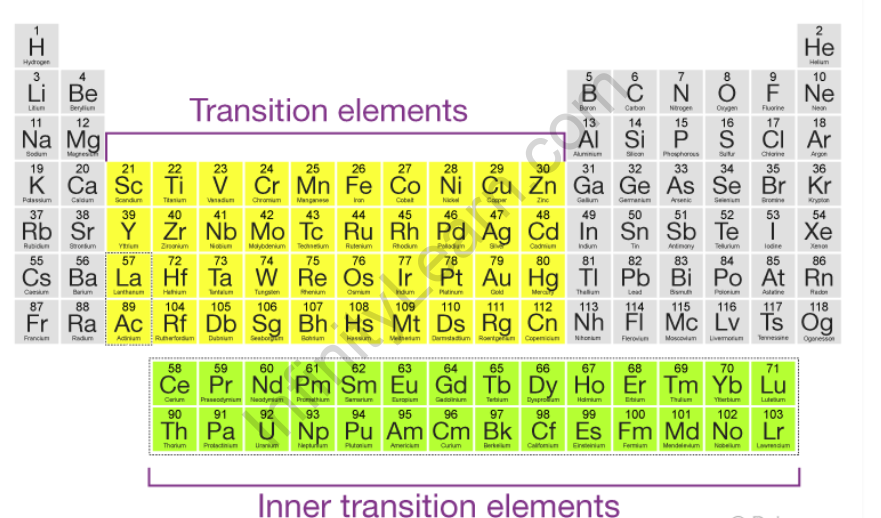 Mercury, cadmium, and zinc are not considered transition elements due to their electronic configurations, which correspond to (n-1)d10 ns2. In their ground states and even in some of their oxidation states, these elements have completely filled d orbitals. Mercury’s +2 oxidation state, for example, corresponds to an electronic configuration of (n-1)d10. Because of their distinct filling order, transition elements are frequently referred to as “d -block” elements. The ability of compounds containing a variety of transition elements to be widely and vividly coloured distinguishes them. As visible light passes through a transition metal compound dissolved in water, the d-orbitals absorb light of varying energies. Visible light of a given energy level that is not absorbed produces a clear coloured solution.

They are excellent heat and electricity conductors. The transition metals can be shaped (easily hammered into shape or bent). These metals have a high hardness. Transition metals appear gleaming and metallic. Most transition metals (such as iron or silver) are greyish or white, but gold and copper have colours that are not found in any other element on the periodic table.

The element is said to belong to the first series of inner transition elements when differentiating electrons enter one of the 4f orbitals. This series includes fourteen elements following lanthanum (La). Lanthanides or lanthanoids are the elements that follow lanthanum in the periodic table. Lanthanum does not have any 4f electrons, but it is commonly included in lanthanide because it is chemically similar to lanthanoids. The electron obtained by successively filling 5f orbitals is referred to as actinides or actinides. They are so-called because they follow actinium (Ac) in the periodic table. The actinide series, which consists of fourteen elements ranging from Th(90) to Lw(103), is also known as the second inner transition series. Despite the fact that actinium (Z=89) does not have any 5f electrons, it is commonly used.

Q. What other names are there for inner transition metals?

Q. What exactly is the distinction between a transition metal and a F element?

Ans: Transition elements are unique in that they may have an incomplete internal subshell that allows valence electrons to be located in a shell other than the shell outside. Certain elements have only valence electrons in their outer shell. It allows for the formation of transition metals in a variety of oxidation states.