In 1961, Peter Mitchell wrote the Chemiosmotic hypothesis. Describes the mechanism of ATP synthesis within chloroplast during photosynthesis. During the photochemical phase or light reaction, ATP and NADP are produced. These are important components and are used in the black reaction to the production of the final product of photosynthesis i.e. sugar molecules. Let’s see how these ATP and NADPH are formed during light reactions. 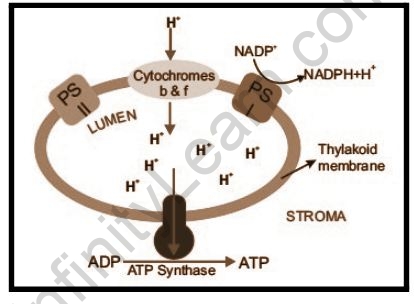 As with the chemiosmotic hypothesis, ATP production is the result of a proton gradient established throughout the thylakoid membrane. Required components for chemiosmosis are proton gradient, proton pump, and ATP synthase. ATP synthase is an enzyme that helps to bring about ATP synthesis. The enzyme has two components – F0 and F1. F0 is a transmembrane channel that stops mutations in F1 activate enzymes. They have to phosphorylate ADP. One of the driving factors of ATP Synthase is the protein gradient that is built up throughout the membrane.

In plants, during light reactions, photosystems help chlorophyll absorbs light. As a result, hydrolysis (water separation) occurs and releases electrons and protons. Electrons receive pleasure at high energy levels and are transported by the electron transport system while protons (hydrogen ions) from the stroma begin to accumulate inside the membrane. This creates a proton gradient. Some protons are used by photosystem I to deplete NADPH. When the proton gradient is folded, it releases energy and the protons are made back to the stroma via F0, the transmembrane channel of ATP synthase. These released forces cause changes in F1 activation and activate ATP synthase to convert ADP into ATP.

According to this view, glucose-like molecules are converted to acetyl CoA in the form of an energy-rich intermediate. Proper oxidation of acetyl CoA occurs in the mitochondrial matrix and is associated with a reduced molecule form of the network company namely FAD and NAD. Carriers then donate electrons to the electron transport chain in the inner lining of the mitochondria, which further supplies them to various other proteins present in the ETC. The energy present in the electrons is primarily used to pump protons from the matrix into the inner mitochondrial membrane. It is used for energy storage in the form of a transmembrane electrochemical gradient.

Protons return to the inner lining with the enzyme ATP synthase. Proton flow flows into the mitochondria matrix via ATP synthase, which receives a good amount of energy for ADP to be synthesized with inorganic phosphate to produce ATP.

The ATP synthase enzyme contains 2 subunits, including F0 and F1. The F0 subunit is involved in the transfer of protons throughout the cell, causing a change in F1 activation, and leading to the activation of enzymes. The enzyme phosphorylates ADP converts ADP molecules into ATP molecules. The gradient of protons present throughout the membrane is the main influence of ATP synthase.

In the process of light reaction or the light reaction phase of photosynthesis, chlorophyll, with the help of photographic systems, absorbs light. It leads to a hydrolysis process, in which water molecules are separated, producing electrons and protons throughout the process. The released electrons are excited and move to a higher energy level and are transported by the electron transport system. Meanwhile, protons released from the stroma begin to accumulate in the membrane. This process results in the production of an important proton gradient, which is actually a product due to the functions performed by the electron transport chain.

A small amount of the resulting protons are used by the imaging system to reduce NADP + to NADPH by electrons obtained in photography. Finally, the proton gradient collapses and releases heat, energy, and protons back into the stroma via ATP synthase F0. This effect force causes changes in all F-1 configurations, and this, in turn, stimulates ATP synthase that converts ADP.

1. What is the Difference Between ATP and ADP?

Ans: The Adenosine triphosphate (ATP) molecule is a biologically recognized nucleotide as a potential source of intracellular energy transfer. It is able to store and transfer chemical energy to cells. In the process of nucleic acid synthesis, a major role is played by ATP molecules. ATP captures the chemical energy produced by food molecules and releases them to support and enhance other processes that take place within the cell.

ADP is an abbreviation for adenosine diphosphate. It is not only one of the most important molecules in the body but also one of the highest in number. It is part of DNA and is essential for muscle contraction. It also promotes healing when a blood vessel is broken due to injuries. Even in all of these roles, the most important tox of the ADP is in the process of conserving and releasing energy within the organism.

The chemical reaction of photosynthesis can be labelled as follows:

Therefore, glucose and oxygen are produced as products due to the chemical reaction of photosynthesis in green plants. This is the answer to the question of what is produced during photosynthesis.