Sulfur is a chemical substance with the atomic number 16 and the symbol S. It’s nonmetallic, plentiful, and multivalent. Sulfur atoms form cyclic octatomic molecules with the chemical formula S8 under normal circumstances. At ambient temperature, element sulfur is a bright yellow crystalline solid. Sulfur is the tenth most plentiful element in the universe and the fifth most prevalent on Earth in terms of mass. Sulfur on Earth is mostly found in sulfide and sulfate minerals, while it is occasionally found in its pure, native form. The manufacturing of sulfuric acid for sulfate and phosphate fertilizers, as well as other chemical processes, is the element’s most common commercial application.

Sulfur is required for all living things; however, it is nearly always found in the form of compounds or metal sulfides. Organosulfur compounds include three amino acids (cysteine, cystine, and methionine) and 2 vitamins (biotin and thiamine). The phase transition has little effect on the structure of the S8 ring, but it does influence the intermolecular interactions. Between melting and boiling temperatures, octa sulfur changes allotropes again, switching from -octa sulfur to -sulfur, with a decreased density but increased viscosity due to polymer formation. As depolymerization happens at higher temperatures, the viscosity falls.

Sulfate is largely produced from the environment in most forest ecosystems, with some sulfur contributed through weathering of ore minerals and evaporites. The isotopic composition of sulfur has been used to detect pollution sources, and enriched sulfur has been utilized as a tracer in hydrologic research.

Sulfur in a variety of allotropic forms that are all in the same physical state However, rhombic or octahedral (– sulfur) and monoclinic sulfur (– sulfur) is the most important crystalline forms. At temperatures below 96oC, we find the shape of rhombic sulfur. Monoclinic sulfur, on the other hand, forms at temperatures above 96°C.

The changeover temperature in between two crystalline formations is 96 degrees Celsius. Polymeric sulfur is yet another allotrope of sulfur (S8). It’s a ring particle with eight parts. Organic media synthetic and natural rubber are all insoluble in this. It’s also not soluble in carbon disulfide.

Most stable allotropic form of Sulphur

The yellow rhombic allotrope of sulfur, commonly known as -sulfur, is the most stable and consistent allotrope of sulfur. When the rhombic structure is heated to temperatures more than 370 K, the rhombic structure transforms into monoclinic, also known as -sulfur. Octahedral sulfur is another name for rhombic sulfur. Rhombic sulfur is immiscible in water but perfectly miscible in organic solvents like benzene, ether, and others like alcohol. 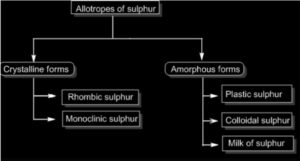 Sulfur is used in a variety of ways.

Significance of compounds of Sulphur in NEET exam

To expert the NEET test, you should get a handle on your themes’ major ideas in general. For this, answers should be enormously improved and introduced in an intelligible way, utilizing somewhat straightforward methodology and fewer estimations. This permits you to save time and exertion during the test. For web-based learning and comprehension of ideas, live classes are accessible. Basic free pdfs are likewise accessible in disconnected mode. Subsequently, learning and taking notes occur simultaneously. By getting to these free PDFs, you can get a total arrangement of notes.

What is the significance of sulfur?

Because of its applications, sulfur has taken on a new significance. Its applications are not restricted to the industrial sector; it also plays an important function in our ecology by influencing plant growth. As a result, numerous sulfur-containing fertilizers have been developed.

What is the impact of sulfur?

The impact of sulfur has increased as a result of its applications. Its uses aren't limited to industry; it also has a significant impact on our environment by influencing plant development. As a result, a number of sulfur-based fertilizers have been created.

What is amorphous sulfur, and what is it used for?

The quenched result of sulfur that melts over 160°C is known as amorphous sulfur (at this temperature, the liquid characteristics melt and alter dramatically). For instance, a significant increase in viscosity). Its appearance gradually shifts from a plastic to a glassy state. Glassy, vitreous, or plastic sulfur are some of its other names. -sulfur is another name for it. It contains a complicated blend of catena-sulfur that is combined with cyclo-forms.