Digestion is the straightforward act of breaking down food molecules into smaller components, as we’ve taught. This procedure starts in the mouth and continues via the stomach, small intestine, large intestine, and finally the anus. This is how digestion works on a physical level. Let’s take a closer look at the chemical process of digestion that occurs when biomolecules are digested. 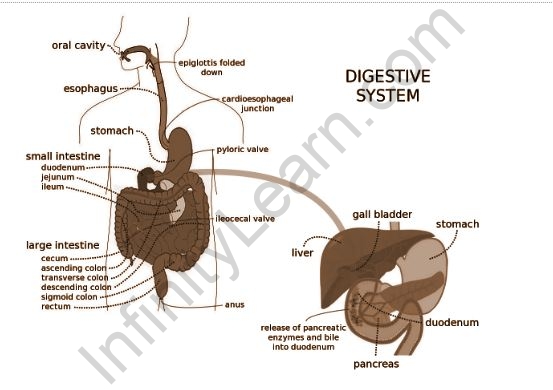 The process of digestion involves breaking down large, insoluble food molecules into smaller molecules that may be absorbed into the bloodstream. Many digestive fluids and enzymes are used in this process, including saliva, mucus, bile, and hydrochloric acid, among others.

What is the function of the digestive system?

Your digestive system is built specifically to convert your food into the nutrients and energy you require to live. When that’s done, it neatly wraps your solid waste, or stool, for disposal the next time you have a bowel movement.

What is the significance of digestion?

Your body requires nutrients from the food you consume and the liquids you drink to keep healthy and perform correctly. Carbohydrates, proteins, lipids, vitamins, minerals, and water are all nutrients. Your digestive system breaks down and absorbs nutrients from the food and liquids you consume so that they may be used for vital functions such as energy, cell growth, and cell repair.

When food enters the mouth, it is mechanically digested by mastication (chewing) and also becomes when it comes into contact with saliva. Saliva contains salivary amylase, a digestive enzyme that begins the digestion of starch in meals.

The food will be in the form of a tiny, circular slurry mass called a bolus after it has been masticated and starch digested. The motion of peristalsis transports it down the esophagus and into the stomach.

Gastric fluids kick-start protein digestion in the stomach. Pepsin and hydrochloric acid are the most common ingredients in these juices. Because the HCl may cause damage to the stomach wall, the stomach secretes mucus, which forms a sticky covering that protects the stomach from the acid’s harmful effects.

Protein digestion occurs simultaneously thanks to peristalsis, which allows the quantity of food to combine with the digestive enzymes. After some time, a thick liquid called chyme is created, which enters the duodenum, where it interacts with pancreatic digestive enzymes and liver bile juice before passing through the small intestine. The chyme gets taken into the bloodstream when it has been thoroughly digested.

It’s worth noting that the small intestine is responsible for 95% of nutrient absorption. In the large intestine, where the pH is slightly acidic, water and minerals are reabsorbed back into the circulation. Some vitamins generated by bacteria in the colon, such as vitamin K and biotin, are also taken into the bloodstream in the colon. During feces, waste material exits the rectum.

Disorders of the Digestive System

Inflammation of the intestine is caused by a variety of bacterial, protozoan, parasitic, and viral infections. Jaundice, vomiting, diarrhoea, constipation, indigestion, and other conditions are prevalent.

Malnutrition-related diseases are especially widespread in developing and impoverished countries.

The process of absorbing or assimilating chemicals into cells or across tissues and organs via diffusion or osmosis is known as absorption. The bio-macromolecules are broken down in the duodenum and absorbed in the jejunum and ileum of the gut. The undigested food travels to the big intestine, where it absorbs some water and minerals.

Varied areas of the body absorb different amounts of nutrients, with the small intestine absorbing the most.

Assimilation is the process by which an absorbed nutrient travels through the bloodstream and lymphatic system to various parts of the body for use.

Carbohydrates are an important ingredient in human nutrition. Sugar and starch are the two forms of carbohydrates that the human digestive system can process.

The small intestine and three enzymes found in the mouth, Lactase, Sucrase, and Maltase, break down sugar in the gastrointestinal tract.

In the same way, starch is broken down by Amylase enzymes found in the mouth and stomach. Carbohydrates are absorbed in the small intestine with the help of Villi, which are tiny finger-shaped projections. In addition, see: Carbohydrates

Carbohydrate digestion begins chemically in the mouth. The flowchart below depicts the set of stages required in breaking down carbs into monomers in detail.

Digestion and Absorption of Proteins

Proteins are essential for bodily cell and tissue growth and replenishment. Protein digestion occurs in the stomach with the help of protease and pepsin enzymes, which break down proteins into amino acids. The presence of hydrochloric acid in the stomach aids the process. Amino acids are small molecules that are taken into the bloodstream through the small intestinal wall.

Digestion and Absorption of Lipids

Fats stay together as a big glob of insoluble substance after reaching the stomach because they are hydrophobic. Bile juice, which contains bile salts, is used to break it down. Pancreatic lipase, the body’s main fat-absorbing enzyme, subsequently acts on these broken molecules. Pancreatic lipase degrades fats into free fatty acids and monoglycerides, which are small enough to pass past the small intestine and into the bloodstream.

Food is an essential component of any live organism’s sustenance and growth. Humans have evolved specific systems for converting food into energy and distributing it to all of the body’s cells. From the mouth to the anus, the human digestive system is made up of a succession of interrelated organs.

What exactly is digestion?

Digestion is the mechanical and biological process of reducing complex food molecules into simpler compounds that may be absorbed.

What is the purpose of bile?

The liver produces bile, which is a dark yellowish-green or brown fluid that is stored in the gallbladder. It is made up of water and organic molecules such as bile acids, lipids, bilirubin, and cholesterol.

The last stage of digestion is elimination. Food residues that cannot be digested or absorbed are expelled or egested from the body as semi-solid faeces during this procedure.

Where does the digestive process take place?

The digestive process starts in the mouth and continues to the stomach, small intestine, large intestine, and finally the anus.