The rectifier is an electrical device that transforms alternating current (AC), which flips direction frequently, to direct current (DC), which flows in just one direction. Rectification is the term for the process of straightening the direction of the current. Diode and vacuum tubes, wet chemical cells, mercury arc valves, stocks of cotton and selenium oxide plates, semiconductor diodes, silicon-controlled rectifiers, and other silicon-based semiconductor switches are all examples of rectifiers. Rectifiers are used in a variety of applications, but they’re most typically found in DC power supply and high-voltage direct-current power transmission systems.

Many electrical circuits rely on DC voltage to function. As we know, the p-n junction diode is a device that converts AC voltage and current into DC voltage and current fast. We can say that the p-n junction diode permits electric current to pass in forward bias, but in reverse bias, the current is blocked. We can say that a diode enables just one direction of electric current to pass. The diode’s unique characteristic allows it to function as a rectifier.

An uncontrolled rectifier is a type of rectifier whose voltage cannot be controlled. Such types of rectifiers are further subdivided into two categories:

Diode as a Rectifier

The p-n junction diode is most commonly used in rectification circuits. In the power supply, these circuits are used to represent the conversion of AC signals to DC. A diode rectifier produces an alternating voltage that pulsates in time. The filter smooths out the voltage pulsations, and a regulator removes the ripples to generate DC voltage.

We have two fundamental methods of diode rectification:

One-half of each AC input cycle is rectified in a half-wave rectifier. When the p-n junction diode is forward biased, it produces little resistance, whereas when it is reverse biased, it produces a lot. When the input voltage is applied for a one-half cycle, the diode is forward biassed, and when the input voltage is applied for the other half cycle, it is reverse biased. The best results can be obtained by switching half-cycles.

Both positive and negative cycles are included in the half-wave rectifier. The current will flow from positive to negative during the positive half of the input, resulting in only a positive half cycle of the AC supply. The voltage at the secondary winding of the diode will decrease when an AC supply is introduced to the transformer. Every one of the variations in the AC supply will be reduced, and the load resistor will receive pulsating DC voltage.

The current will flow from negative to positive in the second half cycle, and the diode will be reverse biased. As a result, no current will be generated at the output, and we will be unable to obtain power at the load resistance. Minority carriers cause a small amount of reverse current to flow during reverse bias.

The ratio of output DC power to input AC power is known as rectifier efficiency. Finally, the efficiency of a half-wave rectifier is 40.6 percent.

The form factor is defined as the ratio of the RMS current value to the output DC voltage. It is known that 1.11 is the form factor of a full-wave rectifier. 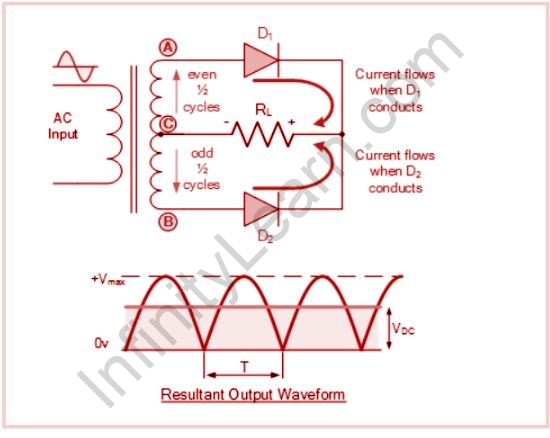 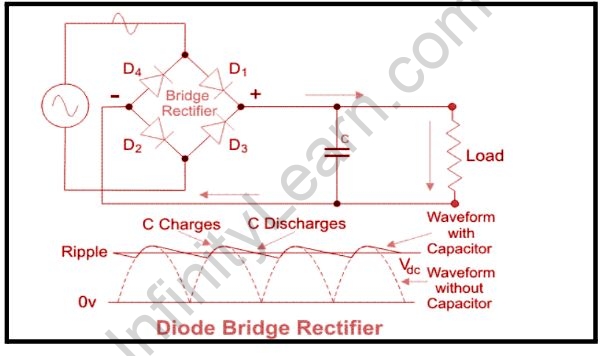 The capacitor acts as a filter, removing ripple frequencies and resulting in a DC voltage with a lower ripple frequency. After filtering, we must utilize a voltage regulator to get a controlled DC voltage at the output.

The information about diodes as a rectifier from various physics-related articles is available here. Diode as a rectifier and its general concepts are important topics in physics. Students who want to flourish in physics need to be well known about diodes and rectifiers to get deep knowledge about them to do well on their exams. The definition, types, diagrams, and brief explanations are provided here to assist students in effectively understanding the respective topic. Continue to visit our website for additional physics help.

What is an uncontrolled Rectifier?

A rectifier is a circuit converter that transforms AC current to DC current. The rectifier circuit is known as the uncontrolled rectifiers circuit since it solely uses diodes. SCR, unlike diodes, does not become or behave like this after conducting when the voltage becomes positive. Gate pulse signals are used to initiate it.

What are the components of a Rectifier?

A rectifier is made up of three parts: a transformer, a stack, and a cabinet. The transformer's job is to safely separate the primary side of the incoming AC voltage from the secondary side, which is then regulated to control the rectifier's output voltage.

What is the reason behind half-wave rectifiers not being used in the dc power supply?

Half-wave rectifiers aren't used for dc power supplies since the supply they give is insufficient.