Chemical reactions can occur both ways (forward and backward) or simply one way. Reversible reactions are those that go in two directions and can be identified by the arrows moving in two directions, as shown in the example below.

Only reversible reactions can perform dynamic equilibrium, which happens when the forward reaction rate equals the reverse reaction rate.

A system in a stable state is called dynamic equilibrium. This indicates that the variables in the equation do not change over time (since the rates of reaction are equal).

Equilibrium is Dynamic in Nature 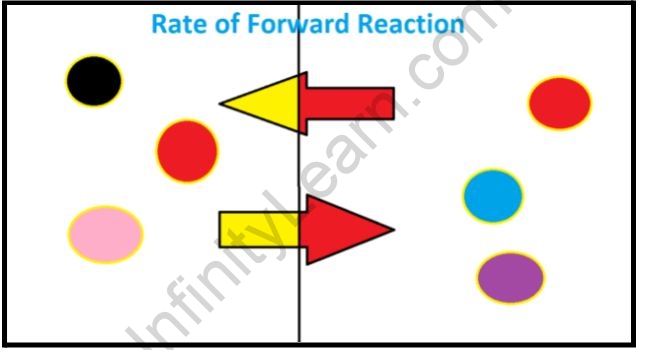 At the macroscopic level, the static, steady-state can be observed. An irreversible reaction continues until all of the reactants have been used to create products. The reaction comes to a halt when the reactants reach their limit, and static equilibrium is reached.

An irreversible reaction like the conversion of graphite to diamond, for example, reaches a static equilibrium in which all carbon atoms are linked together in covalent bonds, and their movement is constrained. Because it simply shows the ratio between reactants and products, the equilibrium constant cannot determine whether the reaction is static or dynamic. As a result, the rate of reactions is critical in determining whether a reaction is dynamic or not. The stoichiometric components of the balanced equation can be used to predict reaction rates if the reaction order and rates are determined experimentally. Reversible reactions are known as dynamic reactions. The forward reaction is faster than the reverse reaction in the early stages of a reversible reaction until the equilibrium state is reached, at which the forward and reverse rates are equal.

Getting a Bathtub Drained

When a bathtub is filled to a specific level, and the plug is removed while water is still being introduced through the tap, the water being taken out should, in principle, be equal to the water being put in. While a continuous volume of water is being added to the bathtub system, the amount of water in the tub will remain constant. If the system changes in any way, such as the flow from either end of the tub, the water level will change as well, depending on how much the system changes.

Salinity is kept at a fairly constant level because dissolved materials are constantly introduced by streams, but they are also removed in a variety of chemical, physical, and biological mechanisms. The average time, also known as the “reference time,” is the time it takes for each constituent, such as sodium ions or magnesium ions, to go from input to output. This results in a varied balance between the input and output rates of the various elements.

Is chemical equilibrium dynamic in nature?

Chemical equilibrium is dynamic because forward and backward reaction velocities are equal, and the concentrations of reactant and product are unchanged at this equilibrium condition. Changes in concentration, pressure, or volume can cause the equilibrium to move in either direction.

In chemistry, what is a dynamic process?

In diffusion, what is dynamic equilibrium?

The transfer of particles from a high-concentration area to a low-concentration area is referred to as diffusion. Equilibrium refers to a condition in which everything is in its proper place (particles are evenly spread out). Things keep happening in a dynamic environment - the particles don't stop moving.