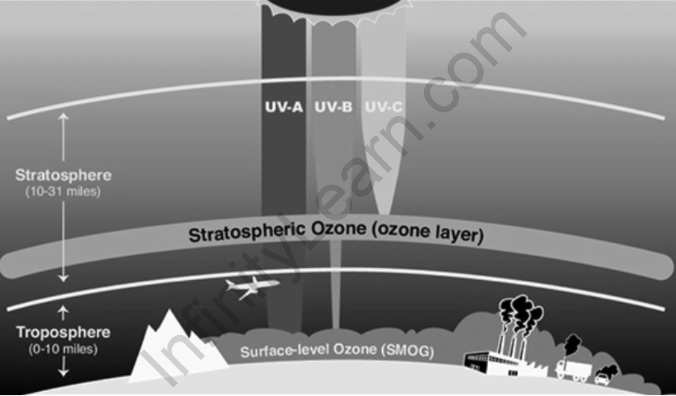 Ozone layer: The ozone layer, also characterized as the ozone barrier, is an area of the Stratosphere that traps the majority of UV radiation from the Sun. It has a significant ozone (O3) concentration in contrast to other areas of the atmosphere, although it is still small in comparison to other gasses in the stratospheric. The ozone layer has a concentration of fewer than 10 parts per million, while the typical ozone concentration in the entire atmosphere is around 0.3 parts per million. Although its thickness varies seasonally and geographically, the ozone layer is primarily located in the lower stratosphere, between 15 and 35 kilometres above Earth.

Sydney Chapman, a British physicist, identified the photochemical principles that cause the ozone layer to form in 1930. Ultraviolet radiation strikes regular oxygen molecules containing two oxygen atoms (O2) in the Earth’s stratosphere, shattering them into individual oxygen atoms (atomic oxygen); the atomic oxygen subsequently mixes with unbroken O2 to form ozone, O3. The ozone molecule is unstable (though long-lived in the stratosphere), and when UV light strikes it, it splits into a molecule of O2 and a single atom of oxygen, a process known as the ozone-oxygen cycle. Despite the fact that ozone concentration in the ozone layer is very low, it is necessary to live because it absorbs potentially harmful ultraviolet (UV) light from the sun.

Because most UV-A is absorbed by ozone, the majority of this longer-wavelength UV radiation reaches the surface, accounting for the majority of UV reaching the Earth. Although this type of UV radiation is less destructive to DNA, it nevertheless has the potential to cause physical harm, premature skin ageing, indirect genetic damage, and skin cancer.

Depletion of the Ozone layer

The most common ozone-depleting chemical is chlorofluorocarbons. The only time the chlorine atom does not react with ozone is when it reacts with another molecule.

In 1987, the Montreal Protocol was proposed to prohibit the use, manufacturing, and import of ozone-depleting compounds, as well as to reduce their concentration in the atmosphere, in order to safeguard the earth’s ozone layer.

Depletion of the ozone layer is a major worry that is linked to a variety of factors. The following are the primary factors that contribute to the ozone layer’s depletion:

The main source of ozone layer depletion is chlorofluorocarbons or CFCs. Solvents, spray aerosols, freezers, and air conditioners, among other things, emit these. The ultraviolet radiations in the stratosphere break down chlorofluorocarbon molecules, releasing chlorine atoms. These atoms degrade ozone by reacting with it.

According to studies, the unregulated launch of rockets depletes the ozone layer far more than CFCs do. If not addressed, this might result in a significant depletion of the ozone layer by 2050.

The loss of the ozone layer is mostly caused by nitrogenous chemicals such as NO2, NO, and N2O.

Certain natural phenomena, such as Sunspots and stratospheric winds, have been discovered to degrade the ozone layer. However, it only contributes to a 1-2 percent reduction in ozone layer depletion. Volcanic eruptions are also to blame for the ozone layer’s depletion.

Due to the ozone layer’s depletion, humanity will be directly exposed to the sun’s dangerous UV radiation. Humans may have major health problems as a result, including skin illnesses, cancer, sunburns, cataracts, rapid ageing, and a weakened immune system.

Because most energetic UV light cannot reach the Earth’s surface due to ozone in the atmosphere, astronomical data in these wavelengths must be acquired from satellites orbiting above the atmosphere and ozone layer. Because most of the light from newborn hot stars is in the ultraviolet, researching these wavelengths is crucial for understanding galaxies’ origins. GALEX is an orbiting ultraviolet space telescope that was launched on April 28, 2003, and was operational until early 2012.

What are the environmental effects due to ozone depletion?

Plants might have little development, blossoming, and photosynthesis because of solid bright light. The forests are likewise exposed to the adverse effects of UV radiation.

What are the marine effects due to ozone depletion?

Openness to harming UV radiation essentially affects tiny fishes. These creatures are at the head of the amphibian order of things. The animals in the pecking order are additionally hurt on the off chance that the tiny fishes are killed.

What is the definition of global warming?

Due to a variety of human activities, the world is becoming warmer. Pollutants from industrial processes, such as factory smoke, as well as home and residential burning of chemicals, are included. Another cause is the use of non-renewable resources such as fossil fuels. The smoke released by such sources contributes to climate change and instability. As a result, the world is experiencing unpredictable climatic fluctuations and natural disasters. The unsustainable use of these resources and the disregard for environmental concerns will cost a lot of money.