Albert Einstein, a German physicist, is regarded as one of history’s greatest scientists. To mention a few fields, he has made contributions to general relativity, black holes, and the photoelectric effect. The Nobel Prize in Physics was presented to Einstein in 1921 for his discovery of the photoelectric effect. Einstein’s concept of light was both new and beautiful. He demonstrated an effective irradiation approach. In general, photons are said to be a small collection of particles that make up light. These particles have a greater energy level, which is referred to as the quantum of radiation. As a result, light is made up of energy packets or quantum.

Photons are particles that carry momentum and energy from the light source from whence they are emitted. Einstein won the Nobel Prize for his discovery of the photoelectric effect, which was one of his greatest achievements. Light was the first to be described as both a wave and a particle, according to Einstein. This is referred to as light’s wave-particle duality. Quantum mechanics’ core principle of wave-particle duality is the driving force behind the development of solar cells and electron microscopes. When a metal surface is bombarded with enough energy light, it causes the metal’s electrons to eject out, according to the Photoelectric effect. 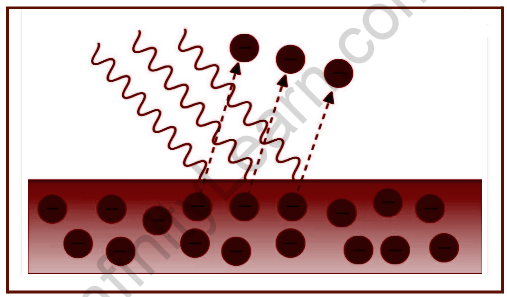 Planck’s Theory and the Photoelectric Effect

In 1905, Einstein modified Planck’s theory to describe the photoelectric effect, which occurs when metal is exposed to light or high photons and releases electrons. The frequency of radiation v determines the kinetic energy of the emitted electrons, not their intensity; for a given metal, there is a frequency 0 below which no electrons are released. Furthermore, emissions happen immediately after the light strikes; there is no apparent delay. According to Einstein, these effects may be described by two assumptions: light is made up of corpuscles or photons, the power of which is specified by Planck’s equation, and a single metal atom can absorb a single photon or anything. Because low-frequency beams could not create the energy needed to produce photoelectrons, as light energy from continuous waves, Albert Einstein argued that light beats were huge packets of varying energies known as photons, rather than a wave moving through the atmosphere.

The frequency of light is equal to the photon energy of light beams of varying intensities. When an electron absorbs photon energy and obtains more energy than its binding force, it is more likely to be freed from the imaging process. When the photon energy is too low, an electron cannot emerge from an object. Because raising the intensity of low-intensity light will simply produce more low-energy photons, no single photon with appropriate electron production will be produced. Furthermore, the individual photon energy determines the amount of electron energy released, not the strength of the incoming light of a specific frequency.

Photoemission can happen in any object, but metals and other conductors are the most common examples. This is because the process creates a cost imbalance, which causes the barrier to rise until the discharge is entirely exhausted if it is not measured by the current flow. Many functional investigations and devices based on the effect of electric photography require clean metal surfaces in the extracted tubes because non-conductive oxide ports on metal surfaces boost the energy barrier in picture extraction. By preventing gases from interfering with electron passage between electrodes, the vacuum also aids electron microscopy.

This photoelectric effect cannot be described using the wave model of light. But, this behaviour can be explained by the particle nature of light, which can be regarded as a stream of electromagnetic energy particles. The visible spectrum is made up of photons, which are light ‘particles.’

The energy held by a photon is related to the frequency of light via Planck’s equation.

Einstein’s Equation of the Photoelectric Effect

The Einstein-Planck relation states that Einstein explained the photoelectric effect using Planck’s quantum theory, which states that light travels in discrete photons. The energy photon has the formula hv, where h is constant and v is the light frequency.

The Photoelectric effect studies show that if the incident radiation frequency is less than the threshold frequency, no electron emission occurs. Energy is closely connected to frequency, as shown by the equation, which also explains the instantaneous nature of electron emissions.

Because there is no electric field outside the metallic surface, the photoelectron will be transformed to simply kinetic energy when it exits. The electron uses some of the quantum energy provided by photons to overcome the surface’s chemical pull.

As a result, a photoelectron’s kinetic energy is equal to (energy imparted by photon) – (energy used to come out of the surface).

For a surface, this energy is constant and is denoted by . It is called a surface’s work function, and it is constant for any given material.

which is Einstein’s photoelectric equation.

Applying this in equation (2), we get

And, v0 is treated the Stopping Potential,

When putting this in equation (3), we get

How can the photoelectric effect be understood?

The easiest way to comprehend the photoelectric effect is to look at the atom's line spectrum.

What are the known applications of the Photoelectric Effect?

What is the importance of the photoelectric effect?

What causes the Auger effect?

When an electron beam collides with a surface, it forms electron holes in the bottom shell, which are then filled by electrons from the upper shell. This jump's surplus energy is transferred to another electron and then released.

What is the work function of the Photoelectric Effect?

Take a ping pong ball and place it inside a bucket. If we strike the ball with other small balls from outside, the vibration of the ball will rise, and it will come out. The smaller ball should have enough energy to pop the ball out, and this energy is referred to as the bucket and ball's work function.