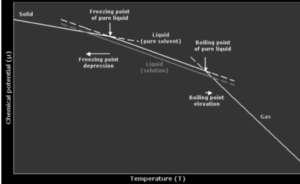 The boiling point of a fluid is affected by impurities, which raise it. When an impurity is introduced to a liquid, the vapour pressure of the liquid will likely fall, raising the Boiling Point. For example, if you boil water on the stove and add even a pinch of salt, the water’s boiling point will rise. Impurities, on the other hand, only serve to lower the melting point of a liquid.

The boiling point elevation is a colligative attribute, meaning it is affected by the presence and amount of dissolved particles, but not by their identity. It’s a result of the solvent being diluted in the presence of a solute.

Use of boiling point elevation

The degree of breakdown or the molar mass of the solute can be calculated using the boiling point election and formulas for boiling point elevation. Ebullioscopy, a Greek phrase for boiling watching, is the name given to this sort of measurement. The cryoscopic constant, on the other hand, states that the freezing point depression is greater than the ebullioscopic constant. However, the freezing point is simple to calculate and is extensively employed in cryoscopy.

The increase in boiling point Tb in dilute solutions is proportional to the molal concentration of the solute in the solution.

The master or educator of infinity learn places forward their maximum effort consistently to make their notes, and they guarantee that all perspectives are tended to completely so understudies get the most noteworthy potential imprints on their NEET test. Model inquiry responses to are portrayed exhaustively with impeccable explanations for every section to guarantee that understudies get the thought. Every number-related issue is settled each in turn, with no progression bounces, which is simple for youngsters to acknowledge. Understudies taking NEET tests will benefit extraordinarily from the components recorded previously.

In real life, how can we use boiling point elevation?

Cooking is one instance where the boiling point elevation can be used. Many recipes call for salt to be placed in water before it boils in order to season it, although this isn't necessary. As a result, if you salt the water, its boiling point will rise, and it will take longer for the water to boil than usual.

Why do you believe the rise of the boiling point is significant?

If you boost the boiling point, you'll be more protected from boilovers. You'll notice that there are a variety of antifreeze brands that will tell you how much boil-over and freeze-up protection they provide. Through the freezing point depression, the antifreeze will help to keep the water in your vehicle's radiator from freezing.

Why do you believe that molality is utilized to describe colligative properties?

Physical features of a solution such as boiling point elevation and freezing point depression are known as collective properties. However, as we add additional solute to the solvent, the temperature of the solution varies, resulting in a change in the volume of the solution. Because molarity is defined as moles of solute per liter of solution, it cannot be used as a unit of concentration.