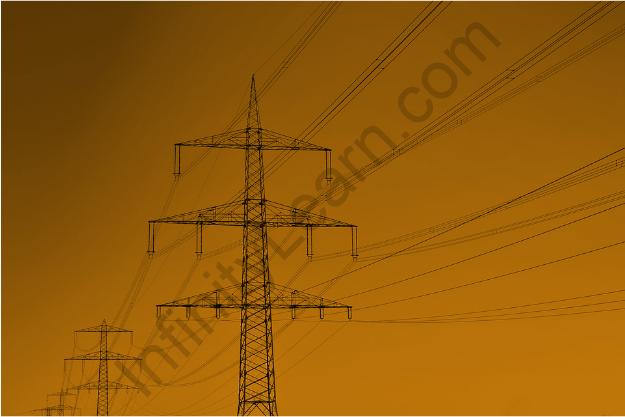 If an electric field is applied to an electric charge, it will experience a force. It will move if it is free to do so, contributing to a current. Free charged particles do exist in nature, such as in the ionosphere, which is the uppermost layer of the atmosphere.

The negatively charged electrons and positively charged nuclei in atoms and molecules, on the other hand, are bound to each other and hence cannot move. The bulk matter is made up of many molecules; for example, a gramme of water comprises about 1022 molecules. The electrons are no longer connected to individual nuclei since these molecules are so densely packed.

The electrons will still be bonded in some materials. i.e., even if an electric field is applied, it will not accelerate.

Some electrons in other materials, particularly metals, are practically free to flow inside the bulk material. When an electric field is applied to certain materials, which are referred to as conductors, they generate electric currents.

When considering solid conductors, the atoms are naturally closely linked to one another, allowing the current to be transported by negatively charged electrons. Other forms of conductors, such as electrolytic solutions, allow both positive and negative charges to move. Only solid conductors will be discussed so that the current is carried by negatively charged electrons in the presence of fixed positive ions.

According to their electric conductivity, materials are classed as conductors, insulators, or semiconductors. In atomic terms, the classifications make sense. Electrons in an atom can only have certain well-defined energies, and they are considered to occupy specific energy levels based on their energies. The lower energy levels of a typical atom with many electrons are filled, each with the number of electrons allowed by the Pauli exclusion principle, a quantum mechanical rule. The greatest energy level for electrons may or may not be totally full depending on the element. The two-atom system has two closely spaced levels for each level of the single atom when two atoms of the same element are brought close enough together to interact.

Conduction of Electricity In Liquids

Liquid conduction is entirely dependent on the ability of liquids to generate ions. Oil and alcohol, for example, do not form ions and so do not conduct electricity well. Vinegar is mostly made up of water with a trace amount of acetic acid. The acetic acid breaks down into ions in the water. As a result, its solution is electrically conductive. The hardness of tap water determines how well it conducts.

Electrolysis in water refers to the chemical disintegration of a liquid or solution into ions when electricity is transmitted through it. Ionic chemicals are substances that break their chemical connection with water. If you’re looking for an example, sodium chloride is a great choice. Ions are atoms that have a charge attached to them. Positively charged ions are called cations, whereas negatively charged ions are called anions.

Conduction of electricity through substances

Acidic fluids, alkaline solutions, certain salt solutions, and metals such as iron, copper, and aluminum are all good conductors of electricity.

The electrical conductor is a material in which electrical charges (electrons) easily travel from atom to atom when voltage is applied.

Copper, gold, silver, aluminum, and other good conductors of electricity can carry a complete electric current in end-to-end voltage, and there are certain conductors that are not metals. The best example is carbon.

Gasses, various solutions such as hydrogen chloride in benzene, sugary solution, some solid elements such as sulfur, phosphorus, wood, and plastic are examples of bad conductors of electricity.

Insulators, such as glass and rubber, are poor conductors of electricity and have a high resistivity because they lack charge carriers or free electrons to transport the electric current.

Some materials can’t be classed as either conductors or insulators; these are semiconductors, which conduct an electric current but do so inefficiently.

Silicon, germanium, and different metal oxides are examples of semiconductors that act as good conductors in some situations and poor conductors in others.

Molecules are held together by a variety of chemical bonds and forces. Ionic and covalent bonds are the two most fundamental forms of bonding.

Ionic bonding is the complete transfer of valence electron(s) between atoms. It’s a type of chemical bond that results in the formation of two ions with opposite charges. In ionic bonding, the metal loses electrons to become a positively charged cation, while the nonmetal gains them to form a negatively charged anion. Ionic bonds require an electron source (typically a metal) and an electron acceptor (usually a nonmetal).

Ionic bonding occurs because metals have a small number of electrons in their outer orbitals. By shedding those electrons, these metals can achieve noble gas configuration and satisfy the octet rule. Nonmetals with valence shells containing close to 8 electrons, on the other hand, are more likely to accept electrons in order to achieve a noble gas structure. To satisfy the octet rule in ionic bonding, more than one electron can be donated or received. The number of electrons provided or received corresponds to the charges on the anion and cation. In ionic bonding, the compound’s net charge must be zero.

The sharing of electrons between atoms is known as covalent bonding. This sort of bonding occurs between two atoms of the same element or elements in the periodic table that are close to each other. This bonding happens most often between nonmetals, but it can also happen between nonmetals and metals.

When atoms have identical electronegativities, covalent bonds are most likely to form (affinities for electrons). Because both atoms have the same affinity for electrons and neither has a strong desire to donate them, they share electrons to attain an octet configuration and become more stable. Furthermore, the atom’s ionization energy is too high and its electron affinity is too low for ionic bonding to occur. Because carbon possesses four valence electrons or half of an octet, it cannot form ionic bonds. Carbon molecules must obtain or lose four electrons to create ionic connections.

As a result, carbon molecules share their four valence electrons through single, double, and triple bonds, allowing each atom to achieve noble gas configurations. Covalent bonds are formed via interactions between the sigma and pi orbitals, resulting in single, double, triple, and quadruple bonds.

What's the difference between a covalent and an ionic compound?

How does electricity go through liquids?

Is it true that alcohol conducts electricity?