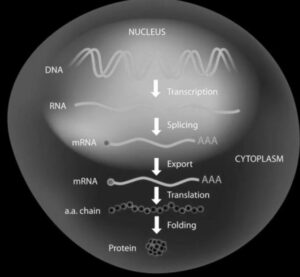 Gene expression is used to build the macromolecular machinery for life by all known life eukaryotic (including multicellular organisms), prokaryotic cells (bacteria and archaea), and viruses. Gene expression is the most basic level at which the genotype lends credence to the phenotype, or observable trait, in genetics. The genotype is the genetic information recorded in DNA, but the phenotype is the “interpretation” of that information. Proteins that affect the organism’s structure and development, or that operate as enzymes catalyzing specific metabolic pathways, are frequently used to display such phenotypes.

All phases of the gene expression process, including transcription, RNA splicing, translation, and post-translational alteration of a protein, can be modified (regulated). Gene expression regulation allows a cell to control the timing, location, and amount of a specific gene product (protein or ncRNA) present in the cell, which can have a significant impact on cellular structure and function. Gene expression regulation is essential for cellular differentiation, development, morphogenesis, and an organism’s versatility and adaptability. Gene regulation could thus act as a catalyst for evolutionary change.

Human gene expression is complicated and tightly regulated. Epigenomic chemicals, which are chemical compounds and proteins that can adhere to DNA and impact gene expression, are involved in regulation at numerous sites during the transcription and translation processes.

Transcription mainly takes place in the nucleus of the cell. The primary goal of transcription is to create and process messenger RNA (mRNA). RNA has a role in gene coding, decoding, regulation, and expression. Instead of thymine, RNA is single-stranded and contains the nucleotide uracil. Ribose sugar molecules are also found in RNA. The information for producing a protein is stored in mRNA, which carries it from the nucleus to the cytoplasm of the cell.

The cytoplasm of the cell is where translation takes place. Protein synthesis is the primary goal of the translation process. Ribosomes get to the mRNA and read the nucleotide sequence. Each codon contains the instructions for one amino acid, and each codon is made up of three nucleotides. Another form of RNA is transfer RNA (tRNA). The amino acids are used by the tRNA to assemble the protein. The protein will continue to be produced until it reaches a stop codon. A three-base sequence that does not code for an amino acid is known as a stop codon.

The codons are read when the ribosome attaches to the mRNA. tRNA binds to each codon, delivering the amino acid that matches the codon and adds to the developing amino acid chain (protein). The amino acid chain begins and ends with one start codon (AUG) and numerous stop codons (UAA, UAG, UGA). None of the 20 amino acids are coded by the start and stop codons.

The process of transforming genes on and off is known as gene regulation. Gene regulation can happen at any stage throughout the transcription-translation process, but it most commonly happens during transcription.

When a chemical substance or protein attaches to a gene and affects gene expression, this is known as an epigenetic alteration. The chemical or protein is linked to the DNA rather than the DNA sequence being altered. Epigenetic modifications can be passed down through the generations or can arise as a result of exposure to environmental toxins, lifestyle choices, or advancing age.

Significance of gene expression and regulation in NEET exam

The molecular basis of inheritance will be the subject of around 5 to 6 questions per year. In earlier years, the gene expression and regulation topic received roughly 24 marks and a 12 percent weighting in the NEET exam question paper. Typically, 80-90 percent of questions on this topic come from the NCERT syllabus. However, for the remaining 10-20% of questions not addressed by NCERT,

What is gene expression, and how does it work?

It is the process by which the data guidelines encoded in DNA are converted into a protein that performs certain activities.

What is gene regulation and how does it work?

It's the procedure that ensures that specific genes are expressed at the appropriate time and in the appropriate amount. It's also in charge of assisting living organisms in adjusting to their surroundings.

What role do gene regulation and expression have in human health?

Gene regulation and expression, in a nutshell, are responsible for the expression of various characteristic traits, as well as the growth and development of living creatures. They are also in charge of the presence and differentiation of characteristics.