The three-dimensional architecture or distribution of atoms in a molecule is characterized as molecular geometry or molecular structure. Considering a compound’s molecular structure can help to determine the compound’s polarities, reactivity, phase of matter, colour, magnetism, and bioactivity. We must first learn about the Lewis electron-dot structure in order to determine the shapes of molecules. Despite the fact that the Lewis theory does not dictate molecular shapes, it is the first step in predicting them. The Lewis framework assists in the determination of bond pairs and lone pairs. The molecular geometry and electron-group geometry then are computed using the valence-shell electron-pair repulsion (VSEPR) theory and the Lewis configuration.

Various spectroscopic and diffraction approaches can be used to determine molecular geometry. The specifics of the vibrational and rotational absorbance detected by IR, microwave, and Raman spectroscopy can provide information about the molecular shape. The distance between nuclei and the concentration of electron density can be used to determine the molecular structure of crystalline solids using X-ray crystallography, neutron diffraction, and electron diffraction. Small molecules in the gas phase can be studied using gas electron diffraction. Complementary information such as relative distances, dihedral angles, angles, and connections can be determined using NMR and FRET approaches.

Because the molecule structure is averaged over much more accessible geometries at higher temperatures, molecular geometries are best determined at low temperatures. Larger molecules frequently exist in numerous stable configurations (conformational isomerism) on the potential energy surface that is near in energy. Geometries can also be determined with high precision using ab initio quantum chemistry methods. As a solid, in solution, or as a gas, the molecular formula can alter.

Predicting Molecule Shapes: In order to determine the form of a molecule, the steps below must be followed.

A molecule with a Linear Shape:

This form of the molecule has two spots in the valence shell of the central atom. They should be organized in such a way that repulsion is reduced to the bare minimum. BeF2 is an example.

Three molecules are bonded to a central atom in this form of the molecule. The electrons are organized in such a way that repulsion between them is reduced. BF3 is an example.

Let’s look at the case of PF5. The uniform distribution of electrons towards the corner of a trigonal pyramid can reduce repulsion here. Three places along the molecule’s equator make up the trigonal bipyramid. The two places are parallel to the equatorial plane on an axis.

Sulphur is in the centre of the Sulphur Hexafluoride molecule, with the fluorine atoms placed symmetrically around it. The atoms are arranged in an octahedral arrangement, giving SF6 is octahedral molecular geometry.

We may say that the SF6 molecule seems to have an octahedral form because it has eight sides when looking at its chemical geometry. The centre atom, on the other hand, binds with 6 Fluorine atoms, giving SF6 is octahedral structure.

The molecule SF6 is a nonpolar one. The bond dipoles are eliminated when six fluorine atoms are placed symmetrically around the sulphur atom, according to the VSEPR theory. It’s a nonpolar molecule as a result of this. It also has the same features as nonpolar molecules and is soluble in nonpolar organic solvents but not in water. 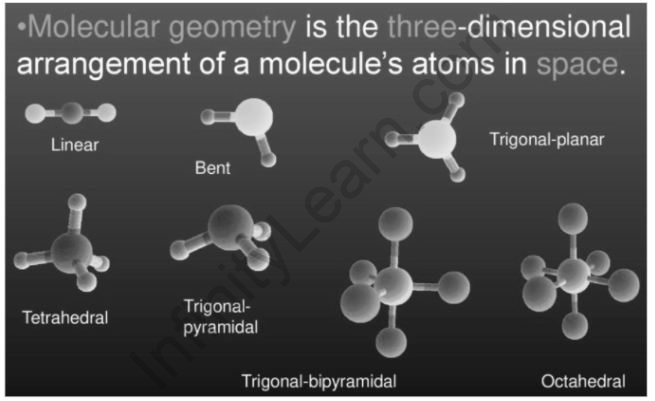 Significance of resonance in NEET exam

Infinity Learn is the very first choice for many CBSE students with regard to NEET exams because of the clarity and validity of the solutions. We double-check that the answers are correct and that they will benefit all pupils. Students can swiftly complete their Class 12 Physics course, which contains molecular geometry and its important ideas, with the help of Infinity Learn’s solutions.

“Practice makes perfect,” as we’ve all heard. This is also true for pupils in Class 12. Students can only get good exam outcomes by applying what they’ve learned into practice. This not only allows students to identify their strong and weak points, but it also helps them to feel less anxious about their exams.

What are some of the benefits of the VSEPR theory?

This theory can be used to precisely anticipate the shapes of molecules in a variety of compounds. It's easier to grasp a molecule's reactions once you understand its shape.

This gas has no effect on the ozone layer and does not pollute the air. SF6 is, however, over 24,000 times more efficient at trapping heat than carbon dioxide (CO2), making it a powerful greenhouse gas. That's why it's critical to keep an eye on the SF6 level in electrical component gears for any leakage.