Heat is energy that is transferred from one body to another as a consequence of a temperature difference. When two bodies at different temperatures come into contact, energy is transferred (i.e., heat flows) from the hotter to the colder. The result of this energy transfer is typically, but not always, an increase in the temperature of the colder body and a decrease in the temperature of the hotter body. A material can absorb heat without increasing its temperature by transitioning from one physical state (or phase) to another, such as from solid to liquid (melting), solid to vapor (sublimation), liquid to vapor (boiling), or solid form to another (usually called a crystalline transition). During the 18th and 19th centuries, the important distinction between heat and temperature (heat is a type of energy and temperature being a measure of how much of that energy is present in a body) was clarified. Since all forms of energy, including heat, can be converted into work, energy is measured in units of work such as joules, foot-pounds, kilowatt-hours, or calories. There are exact relationships between the amounts of heat added to or removed from a body and the magnitude of the effects on the body’s state. The calorie and the British thermal unit are the two most commonly used heat units (BTU).

Heat transfer, like thermodynamic work, is a process involving multiple systems and not a property of any single system. In thermodynamics, heat energy transfers contribute to changes in the system’s cardinal energy variable of states, such as internal energy or enthalpy. This is distinct from the common understanding of heat as a property of an isolated system. 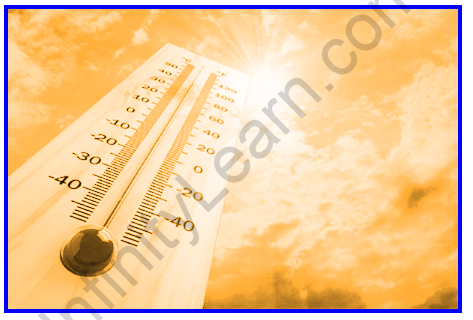 Over an atomic level, absorbed heat causes the atoms of a solid to vibrate, as if they were connected by springs. The energy of the vibrations increases as the temperature rises. This is the only motion possible in metal. Absorbing heat in a liquid or gas causes the atoms in the molecule to vibrate, causing the molecule to rotate and move from one location to another. Because liquids and gases have more “storage” possibilities for energy, their heat capacities are greater than those of metals.

Specific Heat of a Substance

M is said to be the mass of the body

Δt is said to be the rise in temperature

C is said to be the specific heat capacity of a substance depending on the nature of the material of the substance.

We could indeed explain why water has a high specific heat by referring to hydrogen bonds. The molecules must vibrate in order to raise the temperature of the water due to the multitude of joined hydrogen bonds. Because there are so many hydrogen bonds, it takes more energy to break the water molecules by vibrating them.

Correspondingly, it takes some time for hot water to cool down. The temperature drops as heat are dissipated, and the vibrational movement of water molecules slows. The heat emitted compensates for the cooling effect of heat loss from liquid water.

Specific heat is defined as the amount of heat energy required per unit mass to raise the temperature by one degree Celsius.

Specific heat capacity cannot be calculated using data such as atomic number, atomic weight, density, magnetic susceptibility, Vicker’s hardness, and so on. To calculate specific heat capacity, data from an experiment in which heat is exchanged between a metal sample and another object while the temperature is monitored is required.

A sample of metal is heated to a known temperature and placed in a known mass of water at a known initial temperature to determine its specific heat. The metal will lose energy to the water and thus cool, whereas the water will gain energy and thus warm. The system’s final temperature will be reached when a uniform temperature is reached throughout the system. The heat generated by water equals the heat lost by metal.

Why is the specific heat capacity of water higher than metal?

It is due to the specific heat efficiency of the metal spoon being much lower than that of the soup liquid. Water possesses the highest specific heat capacity of any liquid.

What is the primary benefit of water's heat capacity?

Since water has a high heat capacity, increasing the temperature by one degree necessitates a greater expenditure of energy. The sun emits a relatively constant level of energy, which heats up sand and water more quickly.