When you hurl a ball out of sight, for what reason doesn’t it fly through the environment and get away into space? This is on the grounds that gravity pulls it back down. Then, at that point, how does a rocket fly into space? It can fly into space since it is going at an exceptionally high speed.

This speed is called escape velocity. The break speed of heavenly bodies like planets and their normal satellites (the moon for us) is the base speed that must be accomplished by an item, to get away from the gravitational authoritative reach (pull or power or fascination) of the divine body.

At this speed, the amount of the gravitational likely energy and active energy of the framework will be equivalent to nothing.

Conservation of energy leads to the existence of escape velocity. A moving object with a given total energy, which is subject to conservative forces (such as a static gravity field), can only reach locations and speeds in the same range as the total energy; and places having a higher potential energy cannot be reached.

In terms of gravitational potential energy at a particular position, the escape velocity is the speed of an object without propulsion that must be reached in order to escape from gravity (i.e. escape from being pulled back by gravity). As an object attempts to escape a uniform sphere, we will assume that it moves directly away from it (along a line radial to the planet centre) and that the only significant force on the object is its gravity.

Objects can escape the gravitational field regardless of their direction of travel (as long as their path does not intersect the planet) because escape velocity refers to speed, rather than velocity. The most straightforward way to determine escape velocity is by using the conservation of energy. The ship has mass m and is located at a distance r from the centre of mass of the planet, which has mass M.

The ship’s initial speed is equal to its escape velocity . The object will have an infinite distance from the planet at the end of its journey, and its speed will be negligibly slow and will be assumed to be 0.

The only types of energy we will consider are kinetic energy K and gravitational potential energy Ug, so by the conservation of energy,

Escape velocity, in cosmology and space investigation, is the speed that is adequate for a body to escape from a gravitational focal point of fascination without going through any further speed increase.

Escape velocity diminishes with elevation and is equivalent to the square foundation of 2 (or around 1.414) times the speed important to keep a roundabout circle at a similar height. At the outer layer of the Earth, assuming that barometrically obstruction could be dismissed, escape velocity would be around 11.2 km (6.96 miles) each second.

The speed of break from the less huge Moon is around 2.4 km each second at its surface. A planet (or satellite) can’t long hold an environment assuming the planet’s break speed is low to the point of being close to the normal speed of the gas atoms making up the air.

The escape velocity equation is obtained by equating the kinetic energy of an object with mass m and travelling with a velocity of v with the gravitational potential energy of the same object.

The acceleration of the earth due to gravity is g.

Hence, Escape velocity is also given by

As a result of the above equations, escape velocities for larger planets (or celestial bodies) will be greater since they will have a larger mass rather than smaller planets with a lower mass (having less gravity).

Gravity on Earth causes an acceleration of 9.8 m/s2

The radius of Earth,

It is important that the rocket’s velocity when it is launched into outer space is greater than the escape velocity, or else the rocket will crash back to earth.

Guess what, the escape velocity at the poles of the earth differs from that at the equator because the radius is slightly greater at the equator.

It is believed that it is impossible to escape a black hole because the gravitational field inside the event horizon is so huge that the calculated velocity is greater than the speed of light! 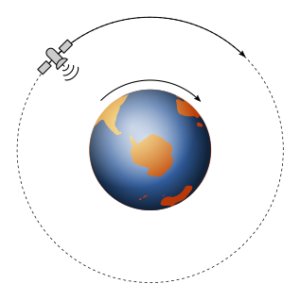 Question 1:What does escape velocity depend on?

Answer:It is dependent on the mass and radius of the celestial body to determine the escape velocity.

Question 2:How is escape velocity and orbital velocity related?

Question 3:Where does orbital velocity differ from escape velocity?

Question 4:What is the highest escape velocity planet in our solar system?

Answer: Jupiter is the planet with the highest escape velocity in our solar system. At 60.20 kilometres per second, Saturn is the fastest.