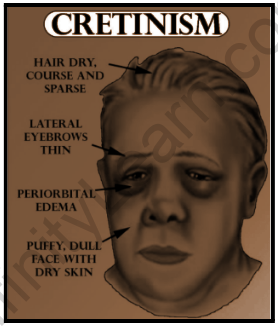 Cretinism: Growth retardation, developmental disorders, and other aberrant traits are all symptoms of congenital hypothyroidism (under activity of the thyroid gland at birth). Cretinism can be caused by a lack of iodine in the mom’s diet when she is pregnant. Because the afflicted were intellectually handicapped and incapable of committing sin, the word cretin was taken from the French word chrétien, which literally means “Christian” or “Christ-like.” This medical issue affects persons in different ways depending on their age. Hypothyroidism causes mental and physical impairment in children, resulting in this syndrome.

TBG (Thyroxine binding globulin) levels may be raised during maternal hypoestrogenism, while total T4 (thyroxine or tetraiodothyronine) and T3 (triiodothyronine) levels may be normal. A high TSH level is also caused by a lack of feedback. In cretinism, prompt diagnosis and therapy are critical since any delay in early replacement might result in irreparable damage. Neonatal cretinism could also be triggered by mother hypothyroidism. Treatment of hyperthyroidism with antithyroid medications or radioactive iodine might lead to hypothyroidism. The hormone replacement will have an immediate effect. The breakdown of thyroid development or a shortfall in hormone production, known as sporadic cretinism, or extreme iodine shortage, known as endemic cretinism, causes this illness.

There are two types of cretinism as far as medicine is concerned:

The following are the main causes of cretinism:

Significance of cretinism in NEET exam

Experts have produced materials for the NEET test that will help students understand the ideas of Human Health and Diseases. The theories on diseases and their causes are presented in this chapter. Students will study diseases and how they affect vital areas of human physiology. Solutions provide a quick overview of the subject content and help you save time when studying for the exam.

Question 1: What can be done to prevent cretinism?

Ans: Around one billion individuals worldwide are in danger of iodine deficiency, which can all be prevented with proper maternal and neonatal iodine nutrition. Iodized salt is the most used prophylactic carrier, but other options include iodized vegetable oil, iodized water, and iodine tablets. Iodine shortage in pregnant women can be hazardous to the developing fetus. As a result, it is recommended that women consume at least 220 micrograms of iodine every day to prevent cretinism.

Q. What’s the difference between myxoedema and congenital hypothyroidism?

Ans: The difference between them is that myxoedema is a disorder in which an adult’s thyroid glands are dormant. Low thyroid hormone levels can also induce skin abnormalities, which is referred to as hypothyroidism. The term “congenital hypothyroidism” was coined to describe this condition that occurs at birth.

Ans: Iodine deficiency is the most prevalent preventable cause of mental impairment on the planet. According to this viewpoint, anyone who is lacking in iodine is at risk of having an inferior cognitive and psychomotor function.