The word “Gymnosperm” comes from the Greek “gymnos” (naked) and “Sperma” (seed), hence the name “naked seed.” Gymnosperms are seed-producing plants, but unlike angiosperms, they produce seeds without fruit. These plants grow on scales or leaves, or at the end of stems form a cone-like structure.

Gymnosperms under the ‘Plantae’ and subkingdom ‘Embryophyta’. Archaeological evidence suggests that they appeared during the Paleozoic period, about 390 million years ago.

Basically, gymnosperms are plants where the ovules are not closed inside the ovary wall, unlike angiosperms. It is usually produced before and after fertilization and before it can grow into a seed. The stem of gymnosperms can have a branch or no branch. Thick cuticles, needle-like leaves, and dead stomata reduce the rate of water loss in these plants.

Gymnosperms, meaning “naked seeds,” are a variety of seed plants and are paraphyletic. Paraphyletic groups are those where not all members are descendants of the same ancestor. Their features include nude seeds, gametes that divide women and men, maturation of the air, and tracheids (which transport water and solvents in the vascular system).

Gymnosperm seeds are not sealed in the ovary; rather, they are expressed in cones or altered leaves. Sporophyll is a special leaf that produces sporangia. The term strobilus (plural = strobili) refers to the strong arrangement of sporophyll around the central stem, as seen in the cones. Some seeds are covered with sporophyte tissue as they mature. A layer of sporophyte tissue surrounding the megasporangium, and later, the embryo, is called an integument.

The gymnosperm family is made up of conifers, cycads, gnetophytes, the Gynkgophyta division, and Ginkgo biloba.

Let’s analyze the features, examples, classifications, and examples of gymnosperms. 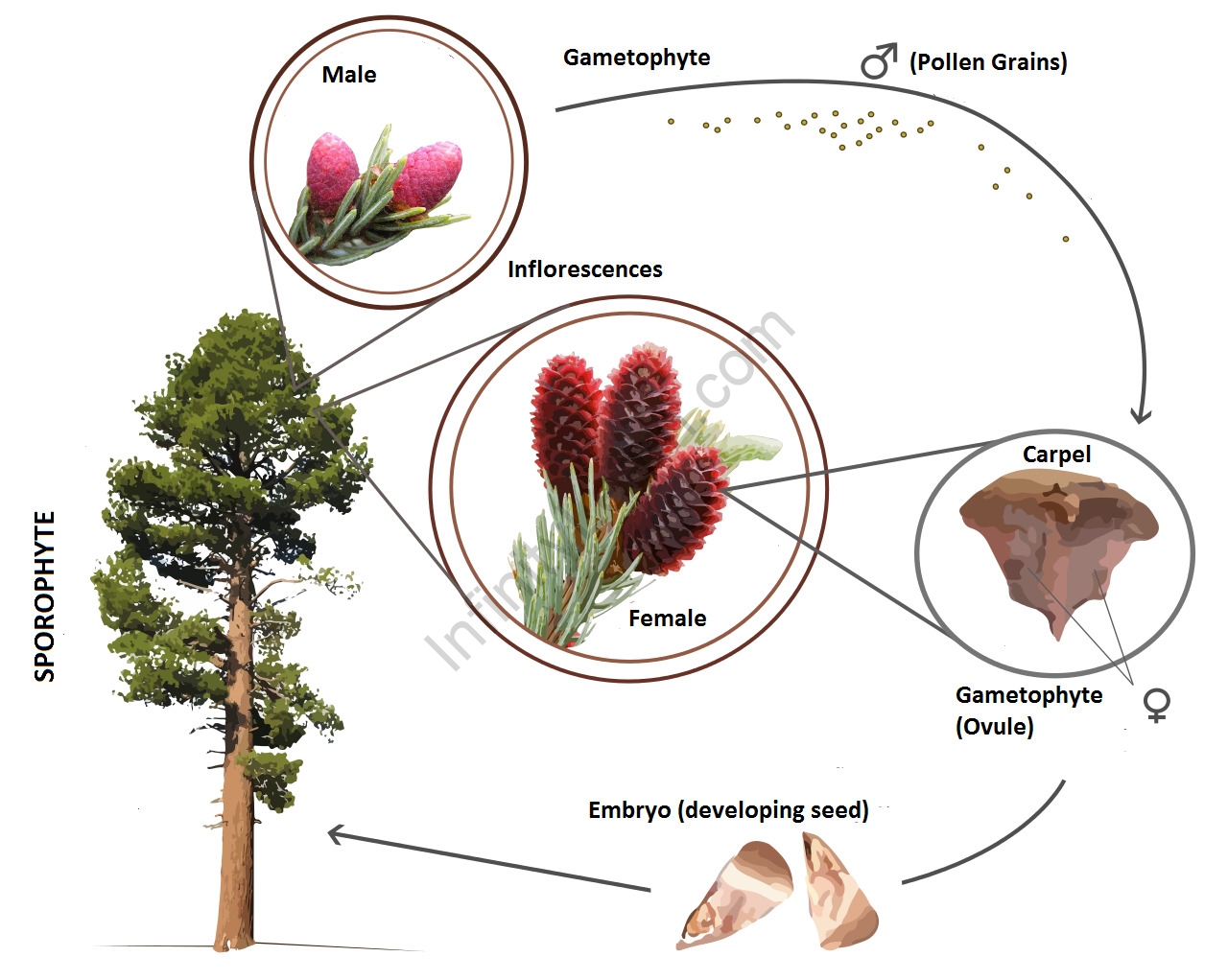 The following are the key features of gymnosperms:

Gymnosperms are divided into four types as given below –

Cycads are dioecious (meaning: individual plants are either male or female). Cycads are seed-bearing plants when most of the members are extinct. They were successful during the Jurassic period and later in the Triassic era. Today, plants are regarded as remnants of a bygone era.

These plants usually have large mixed leaves, thick stems, and small tracts attached to a single central stem. They vary in length anywhere between a few inches to a few meters.

Another class of Gymnosperms, Ginkgophyta, has only one living species. All other members of this class are now deceased.

Ginkgo trees are known for their large size and fan-like leaves. Also, Ginkgo trees have a wide range of applications ranging from medicinal to cooking. Ginkgo leaves are used as a remedy for memory-related disorders such as Alzheimer’s.

Ginkgo trees are also highly resistant to pollutants, and they are more resistant to diseases and pests. In fact, they are so strong that after the collapse of the Hiroshima nuclear bomb, six Ginkgo trees were the only living creatures that survived within a mile or two of the blast area.

Like any other member of gymnosperms, Gnetophytes are also a remnant of the past. Today, only three members of this genre exist.

Gnetophytes usually consist of tropical plants, shrubs, and trees. They are characterized by soft-colored petals. This adhesion reveals ancestral connections with angiosperms.

Gnetophytes are different from other members of this class in that they have vessels in their xylem.

These are the most popular species among the gymnosperm family. They are always green; therefore they do not shed their leaves in winter. These are most evident in the male and female clusters that form needle-like structures.

Coniferous trees are commonly found in cooler climates where the average temperature is 10 ℃. Large sequoia, pine, cedar, and redwood are examples of Conifers.

What is a gymnosperm?

Gymnosperm is a seed-producing plant that includes conifers, cycads, gnetophytes, and ginkgos. They do not produce flowers or fruits and have naked seeds.

Yes, gymnosperms contain embryos. In gymnosperms, the ovule produces embryos and endosperm in the seed coat, but it does not develop into fruit after fertilization.

Give a few examples of gymnosperms.

How are gymnosperms different from angiosperms?

How are gymnosperms divided?

What stage governs the life cycle of gymnosperms?

The haploid stage is a prominent stage in the life cycle of gymnosperms. At this stage, the multicellular haploid gametophyte starts from the spore and produces a haploid gamete. The gametophyte as it grows produces male and female gametes that combine to form the diploid zygote.

Where can gymnosperms be found?

Gymnosperms are often found in cold climates. However, cycads are found in arid and tropical regions.