Alkanes are straight, single-bonded chains of saturated hydrocarbons. This means they are entirely made up of single-bonded carbons and hydrogens. The parent chain is the longest continuous chain of an alkane. Because the parent chain is an alkane, the chain will terminate with -ane. (For example, if this chain has 4 carbons, the name will finish with -butane.) Substituents are groups of hydrocarbons that branch off of this chain and are alkyls because they have one less hydrogen. As a result, they will carry the suffix -yl. (For instance, if there are 4 carbons and a two-carbon substituent, this will result in ethylbutane.)

Hydrocarbons with no double or triple bond functional groups are classed as alkanes or cycloalkanes, depending on whether the molecule’s carbon atoms are organized simply in chains or also in rings. Although these hydrocarbons lack functional groups, they serve as the framework upon which functional groups in other classes of compounds are positioned and thus serve as an excellent beginning point for researching and identifying organic compounds. The alkanes and cycloalkanes are also part of the aliphatic class of chemicals. Simply described, aliphatic substances are those that lack aromatic rings in their chemical structure. 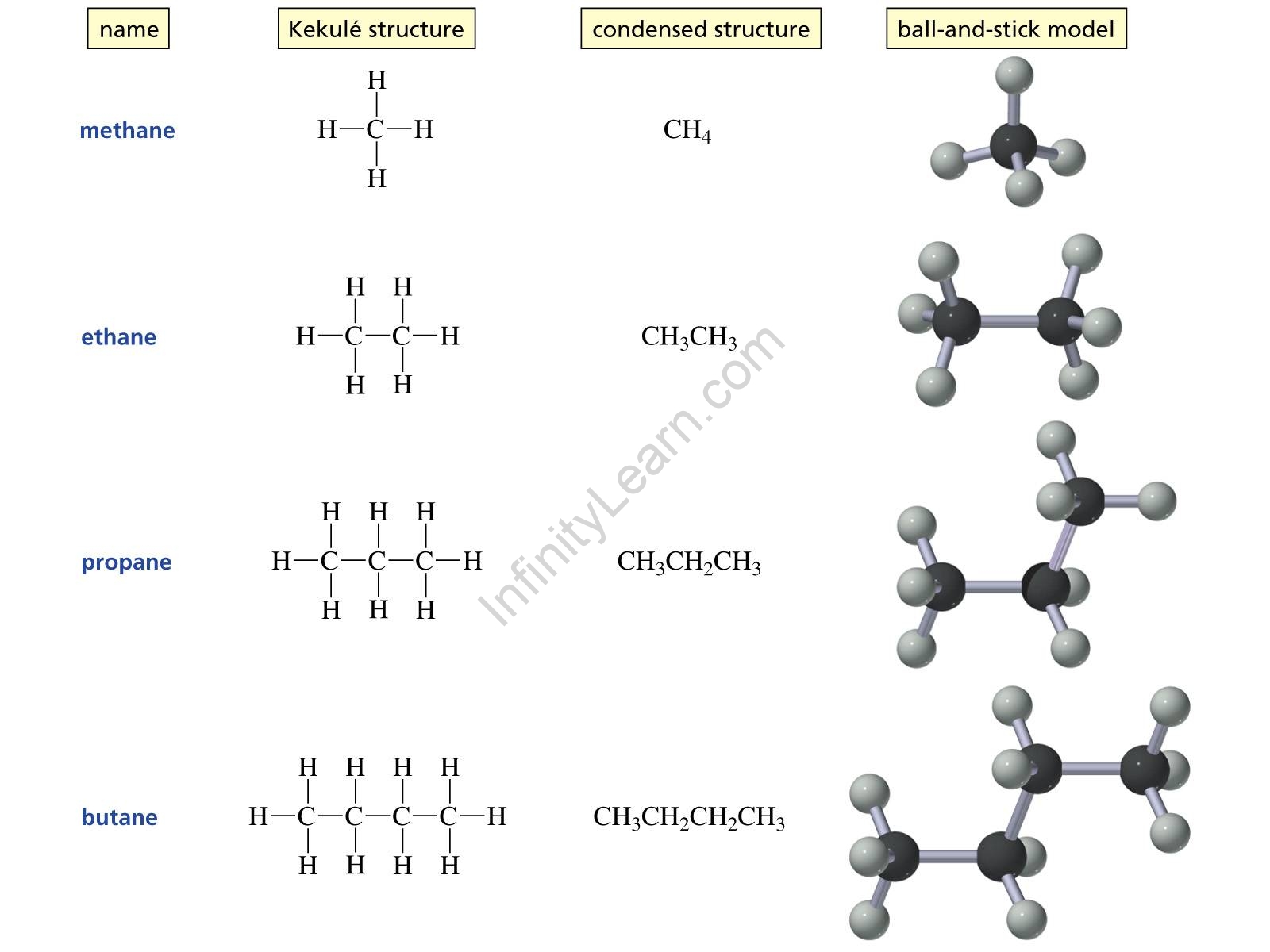 Chemical nomenclature is a set of principles for naming chemical substances in a systematic manner. The International Union of Pure and Applied Chemistry designed and developed the most widely used nomenclature in the world (IUPAC).

We shall use the IUPAC naming system to determine the name of a specific alkane. This is a set of principles devised by a group of scientists in 1919 to ensure that each molecule has a unique name. The importance of giving each molecule a unique name stems from the fact that the name alone tells us exactly how each molecule is constructed.

A sensible nomenclature system should accomplish at least two goals. To begin, it should show how the carbon atoms of a specific chemical are bound together in a distinctive lattice of chains and rings. Second, it should recognize and find any functional groups in the molecule. Because hydrogen is such a frequent component of organic compounds, its amount and position may be deduced from carbon’s tetravalency and are not required in most circumstances. The IUPAC nomenclature system is a collection of logical criteria developed and utilized by organic chemists to avoid issues created by arbitrary naming. Knowing these guidelines and being given a structural formula, one should be able to write a separate name for each individual compound.

In general, an IUPAC name will include three key characteristics:

Some key behavioral patterns and terminologies for naming Alkanes:

(i) A CH2 increment causes the formulae and structures of these alkanes to rise consistently.

(ii) A homologous variation is one that occurs in a succession of compounds in a consistent manner.

(iii) All of these formulations satisfy the CnH2n+2 rule. This is also the maximum H/C ratio feasible for a stable hydrocarbon.

(iv) Because the H/C ratio in these molecules is at its maximum, we refer to them as saturated (with hydrogen).

When alphabetizing, the prefixes di, tri, tetra, and so on, which are used to identify many groups of the same sort, are not taken into account.

Cycloalkanes include one or more carbon atom rings. The simplest instances of this class are carbon rings with a single unsubstituted carbon ring, which form a homologous series identical to unbranched alkanes. When a simple unbranched alkane is transformed to a cycloalkane, two hydrogen atoms must be removed, one from each end of the chain. As a result, the typical formula for a cycloalkane with n carbons is CnH2n. Although a cycloalkane has two less hydrogens than an alkane, each carbon is connected to four other atoms, therefore such compounds are still considered hydrogen-saturated.

Where can I obtain appropriate study materials for alkane, alkene, and alkyne nomenclature?

Everything you need is available on the infinite learn website. Professionals generated these resources, and the material is factual and dependable. Students may learn about nomenclature, hydrocarbons, and a whole lot more!

What do you mean by Alkyl Groups?

An alkyl group is formed when an alkane containing hydrogen is removed from a bond. This Alkyl group is frequently referred to as the letter R, similar to how halogens are represented by the letter X. When a substituent group, such as halogen, binds to an alkane molecule, the molecule's carbon-hydrogen link is converted into a carbon-substituent bond.