The Swedish scientist Baron Jöns Jakob Berzelius (1779–1848) first proposed the concept of allotropy in 1840. The term is derived from the Greek o (allotropia), which means ‘variability, changeability.’ After Avogadro’s hypothesis was accepted in 1860, it became clear that elements could exist as polyatomic molecules, and two allotropes of oxygen were identified. Other cases, such as carbon, were recognised in the early twentieth century as the result of differences in the crystal structure. Ostwald proposed in 1912 that the terms allotrope and allotropy be dropped in favour of polymorph and polymorphism, and that the terms allotrope and allotropy be replaced with polymorph and polymorphism. Allotropes are different structural forms of the same element that can have very different physical and chemical properties. The forces that affect other structures, such as pressure, light, and temperature, cause the change between allotropic forms. As a result, the stability of specific allotropes is dependent on specific conditions. 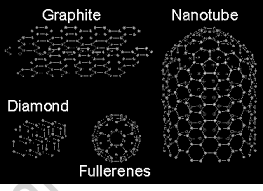 Allotropes can have a wide range of chemical and physical properties. For example, graphite and diamond are both solid-state allotropes of carbon. Graphite is a soft material, whereas diamond is extremely hard. Phosphorus allotropes have different colours, such as red, yellow, and white. Elements’ allotropes can change in response to changes in pressure, temperature, and light exposure. The forces that influence other structures, such as light, pressure, and temperature, influence the change in allotropic forms. As a result, the stability of the various allotropes is dependent on specific conditions.

When a chemical element can exist in more than one crystal form, it exhibits allotropy. Polymorphism is the same phenomenon that a chemical compound exhibits. Whenever an element or compound has a range of possible states of existence, the stable state is the one with the lowest molar Gibbs free energy at the constant pressure and temperature of interest.

Allotropes are one or more forms of a chemical element that exist in the same physical state. The various forms occur from the various ways atoms can be bonded together.

In 1841, Swedish scientist Jons Jakob Berzelius proposed the concept of allotropes. Allotropism refers to the ability of elements to exist in this manner. Whenever an element (a type of stable atom) has two or more forms, these forms could be variations in how the constituent atoms are arranged into solids (crystals) or in the number of atoms found in the basic molecular arrangement (s).

Monotropic allotropes have a single stable form under all normal conditions.

There are several types of enantiotropic allotropes, each of which is stable under different conditions. By changing these conditions, it is possible to convert one form into another (such as temperature and pressure).

Boron (B), the second hardest element, is Group 13’s only allotropic element. It is only second to carbon (C) in terms of its ability to form element bonded networks. Thus, in addition to amorphous boron, several different boron allotropes are known, three of which are well characterised.

Under normal conditions, only carbon and tin exist as allotropes in Group 14. Diamond and graphite were the only known allotropes of carbon for the majority of recorded history. They are both polymeric solids.

Group 15 contains two allotropic elements: phosphorus and arsenic. There are several allotropic forms of phosphorus. The primary colours (from which the others are derived) are white, red, and black (the thermodynamically stable form at room temperature). Only white and red phosphorus are used in industry.

Group 16 contains only three allotropic elements: oxygen, sulphur, and selenium. There are only two known oxygen allotropes: dinuclear “oxygen” and trinuclear ozone. At room temperature and pressure, both are gases.

It has been established that at least twenty-two sulphur allotropes exist. The violet disulfur molecule, analogous to the dioxygen molecule, is the most basic allotrope of sulphur.

Carbon, phosphorus, and sulphur are examples of well-known elements that exhibit allotropy.

Graphite is one of three crystalline, or crystal-forming, carbon compounds. Carbon can also be found in amorphous, or “shapeless,” forms in substances like coal and charcoal. Diamond and fullerenes are the other crystalline carbon allotropes besides graphite. All three forms exist in the form of crystals rather than molecules. Many atoms are bonded together in a repeating pattern in a crystal, which can contain thousands of atoms. The arrangement of atoms in crystals varies for each form of carbon, which explains why they have different properties.

Knowing the chemistry of a diamond necessitates a fundamental understanding of the element carbon. In the nucleus of a neutral carbon atom, there are six protons and six neutrons, which are balanced by six electrons. Diamond is a carbon-based material in which each carbon atom is covalently bonded to four other carbon atoms. This results in a three-dimensional structure that is strong and rigid. Diamond is the hardest natural substance and cannot be scratched by any other natural substance. Diamonds are useful for cutting and grinding tools, as well as rings and other jewellery, because of this property. It is known that diamond is a poor conductor of electricity because it lacks free electrons.

Diamond’s surface is lipophillic and hydrophobic, which means it cannot be wet by water but can be wet by oil. In general, diamonds do not react with any chemical reagents, including strong acids and bases.

Graphite has one delocalized electron per carbon atom. These increase the attraction between carbon atoms, resulting in stronger bonds and greater structure stability.

What are allotropic forms?

Allotropy is the presence of a chemical element in two or more forms that differ in the arrangement of atoms in crystalline solids or the presence of molecules with different numbers of atoms.

The same elements are stable in different geometry at different temperatures, pressures, and atmospheric conditions. Allotropes are formed by the ability of elements such as carbon to form long and cyclic giant structures.

What is the allotropic form of carbon?

If an element exists in more than one crystalline form, those forms are referred to as allotropes; diamond and graphite are the two most common allotropes of carbon.