Alternating Currents: In contrast to direct current (DC), which travels solely in one direction, alternating current (AC) is an electric current that occasionally reverses direction and alters its magnitude constantly over time. Alternating current is the type of electricity that is delivered to companies and homes, and it is the type of electricity that is used by consumers when they plug in kitchen equipment, tv, fans, and lighting equipment to a wall outlet.

A flashlight’s battery cell is a frequent source of DC power. When modifying current or voltage, the acronyms AC and DC are frequently used to signify merely alternating and direct.

Alternators are gadgets that can be used to provide or generate alternating current. Alternating current, on the other hand, can be generated in a variety of ways, including the use of several circuits. A simple single-coil AC generator typically comprises 2 magnets as well as a single rectangular loop of wire is one of the most frequent or simple means of generating AC. The AC generator in this configuration turns mechanical energy into electricity using Faraday’s principle of electromagnetic induction. Meanwhile, three wires are used to supply AC to various kinds of equipment. The following are the details: The hot wire is used to transmit power. The current in the hot wire has a return path through the neutral wire, which is located beneath.The third wire, which is likewise connected to the ground, is attached to the equipment’s metallic parts in order to prevent electric shock.

DC is not the only “type” of electricity in use, despite how convenient and simple it is. Voltages oscillating in polarity, flipping positively and negatively over time, are produced naturally by certain sources of electricity.

Alternating Current is a type of electricity that switches the polarity of a voltage or the direction of a current back and forth (AC). The circle with the wavy line within is the general symbol for any AC voltage source, whereas the famous battery symbol is used as a universal symbol for any Dc power supply.

The polarity or direction of current is unimportant in instances where electricity is used to disperse energy in the form of heat, as long as there is voltage and current to the demand to produce the desired heat (power dissipation). However, because AC allows for significantly more efficient electric generators, motors, and power distribution systems than DC, AC is increasingly being used in high-power applications around the world.

The waveform of Alternating Current:

The period is the time gap between two consecutive cycles with a fixed value. Frequency is expressed as the ratio of cycles or periods per second. The amplitude is the maximum value in both directions. In most circuits, the typical waveform of AC is sinusoidal, with the positive half period corresponding to the positive direction of the current and vice versa.

In addition, the alternating current wave can be represented by a triangle or square wave. When dealing with analog voice or music signals, audio amplifiers produce irregular AC waves. Square or sawtooth waves are produced by some electrical oscillators.

The average value is derived by eliminating the signs because both cycles do some work. As an outcome, only the positive cycle may be used to estimate the average value of alternating amounts of sinusoidal waves.

RMS esteem is characterized as the square foundation of a method for squares of momentary qualities. It can likewise be depicted as how much AC power produces a similar warming impact as a comparable DC power.

Show specific examples of direct current and define it:

The unidirectional passage of an electric charge is known as direct current. Direct current will flow over conductors like wires, it can also flow across semiconductors and even a vacuum. Electric current is distinguished from the alternating current by the fact that it flows in a consistent direction. Some examples of DC current are as follows: 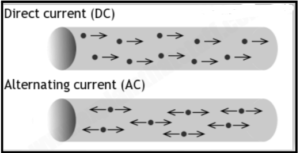 The alternating current NEET discussions are relied upon to reveal and give answers to the most frequently presented requests on the test. With the help of notes from capable analysts in the field, which is given on the Infinity Learn online stage, these can be explained in essential terms. Expecting that students deal with an escalated enthusiasm for the subjects generally through the instructive program, different choice inquiries are clear to practice.

Trained professionals and gifted teachers in the subject give reactions. The reactions are according to CBSE and NCERT rules for the NEET test, helping students in achieving higher results. The courses are reasonably assessed, and there are a couple of free courses open for new students to test. On a comparable stage, there is an alternate determination of courses going from kindergarten to twelfth grade, as well as explicit activities for vicious tests like NEET.

Question 1: Why does the direction of alternating current change?

The sum of charge in all three phases is zero at any given time. The neutral point, which connects one end of each of the three phases and serves as a measurement reference point, is held at zero voltage.

As a result, every phase wire alternates between plus and minus 50 times per second, reversing the current direction. All three-phase wires independently give and take current and return current in this manner. This allows your appliances to function properly.

Question 2: What is the best way to measure alternating current?