A cyclotron is a device that accelerates charged atomic or subatomic particles in a magnetic field that is constant. Ernest Orlando Lawrence and M. Stanley Livingston, two American physicists, invented the first particle accelerator of this type in the early 1930s. A cyclotron is made up of two hollow semicircular electrodes, known as dees, that are mounted back to back in an evacuated chamber between the poles of a magnet. A radio-frequency oscillator generates an alternating polarity electric field in the gap. The particles that will be accelerated form in the gap near the center of the device, where the electric field propels them into one of the dees. The magnetic field there directs them in a semicircular path. The electric field has reversed by the time they return to the gap, so they are accelerated into the other dee.

Although the speed of the particles and the radius of their orbit increase with each crossing of the gap, as long as the mass of the particles and the strength of the magnetic field remain constant, these crossings occur at a fixed frequency that can be adjusted by the oscillator. This type of cyclotron can accelerate protons to energies of no more than 25 million electron volts. The relativistic increase in the mass of any particle as its speed approaches that of light imposes this limitation. The orbital frequency decreases with increasing mass, and the particles cross the gap when the electric field slows them down. To overcome this limitation, the frequency of the alternating voltage impressed on the dees can be adjusted to match the frequency of the orbiting particles. A device with this feature is known as a synchrocyclotron, and it has been used to achieve energies close to one billion electron volts. Another method is to strengthen the magnetic field near the dees’ periphery and focus the magnetic field by varying its azimuth. Isochronous or azimuthally-varying-field (AVF) cyclotrons are accelerators that operate in this manner. 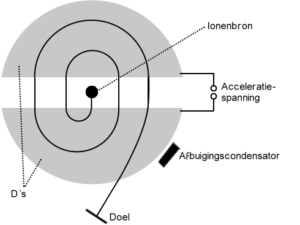 A cyclotron is a type of particle accelerator that accelerates charged particles outwards from the centre along a spiral path. A static magnetic field keeps these particles on a spiral trajectory, while a rapidly varying electric field accelerates them.

The frequency can be calculated as follows:

Where q is the particle’s charge, B is the magnetic field used in the cyclotron, and m is the charged particle’s mass.

In addition to producing imaging isotopes for the RUH’s PET-CT scanner, the laboratory conducts animal and human health imaging and research, as well as crop/plant imaging and research. The facility also houses research into the development of new compounds known as radiopharmaceuticals, which can lead to better detection, diagnosis, and treatment of diseases such as cancer, Alzheimer’s, Parkinson’s, and multiple sclerosis. Scientists can track the processes that can lead to diseases in specific organs by tagging specific biomolecules with radioisotopes, based on how the ‘tagged’ molecules are absorbed. Other areas of study include physics related to the cyclotron’s used in the production of new radioisotopes and the development of more sensitive radiation detectors. Students, faculty, and researchers from a variety of disciplines, as well as industry partners, work together to solve complex problems, and health professionals are trained in the most advanced imaging and treatment protocols. These were the best sources of high-energy beams for nuclear physics experiments for decades. These, however, are still used for this type of research.

Cancer treatment: Cyclotrons can be used in particle therapy to treat cancer, with ion beams from cyclotrons penetrating the body and killing tumors through radiation damage.

1. What is the cyclotron principle?

Ans: The cyclotron operates on the principle that a charged particle moving normally to the magnetic field encounters magnetic Lorentz force, causing the particle to follow a circular path.

2. What exactly is cyclotron motion?

Ans: It means that q only experiences centripetal acceleration. As a result, the charge undergoes uniform deformation motion in a circle The cyclotron motion of a charged particle in a magnetic field is what it’s called.