Electromagnetic spectrum: Electromagnetic energy travels from one medium and covers a wide range of wavelengths, from long radio waves to short gamma rays. Even just a small fraction of these spectra, known as visible light, could be caught by the naked eye. A radio detects a distinct part of the spectrum, whereas x-ray equipment uses a different part of the spectrum. NASA’s scientific instruments examine the Earth, the solar system, and the cosmos beyond using the entire electromagnetic spectrum.

Electromagnetic energy is used when you listen to the radio, watch TV, send a text message, or microwave popcorn. You rely on this energy 24 hours a day, seven days a week. The world as you know it would not be possible without it.

Several gases in the Earth’s crust reflect or absorb electromagnetic radiation, the most important of which are water vapour, carbon dioxide, and ozone. Visible light, for example, mostly travels (is transmitted) through the atmosphere. “Atmospheric windows” refer to the parts of the spectrum having wavelengths that really can penetrate through the atmosphere. Microwaves can travel through clouds, making them the greatest wavelength for sending satellite communication messages.

While our atmosphere is necessary to protect life on the planet and make the planet livable, it is not very useful for analyzing high-energy radiation sources in space. To “see” higher energy and even some lower-energy light, instruments must be stationed above Earth’s energy-absorbing atmosphere.

Our Sun is a full-spectrum energy source, and its electromagnetic waves constantly bombard our environment. The Earth’s atmosphere, on the other hand, shields us from a variety of higher-energy waves which can be hazardous to life. Ionizing waves include gamma rays, x-rays, and ultraviolet waves. Encounter these high-energy waves might cause damage to organic matter cells by altering atoms and molecules. These alterations to cells can be beneficial in some cases, including when radiation is being used to treat cancer, and in others, such as when we get sunburned, they can be harmful. 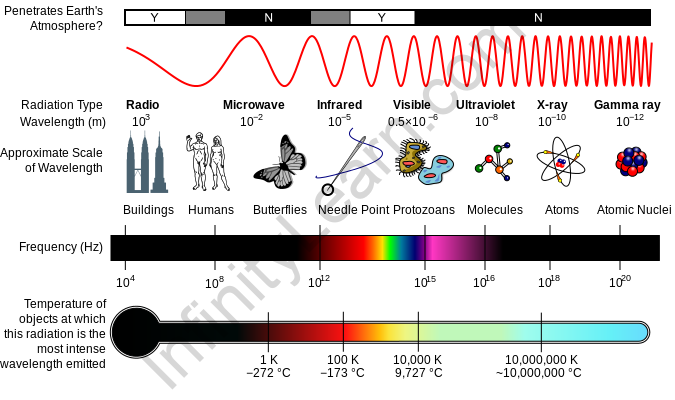 Hertz’s discovery of radio waves and microwaves cleared the door for wireless television, radio, and mobile communication.All visual assistance in daily life is based on the visible light component of the electromagnetic spectrum. This is the part of the electromagnetic spectrum that allows us to see all of the items in our environment, including colours. Roentgen’s discovery of X-rays proved valuable in medicine for diagnosing a variety of diseases and malformations in bones.The atoms are ionized by the strong UV radiation, which causes chemical reactions. Paul Villard discovered gamma rays, which can be used for ionization and nuclear medicine.

The study material for Infinity Lear is produced from top to bottom by one of the best professors in the country. Their knowledge and teaching style make the study materials extremely beneficial in enhancing your NEET exam performance. The purpose of the study materials is to make meaningful material in a simple language using basic approaches that are both time-saving and accurate.

As a result, precision, speed, and dependability are all intertwined. Also, the NCERT Solutions written by staff are the most significant portion of any board exam, JEE, or NEET exam. These solutions are updated on a regular basis and adhere to the most recent CBSE norms and curriculum. Infinity Learn includes a variety of practice question sets, mock test series, previous year answered problems, and questions based on last year’s exams for quick review.

What attribute of an electromagnetic wave is affected by the medium through which it travels?

Determine whether the following claim is true or false: Both radio waves and X-rays are electromagnetic waves that travel at the same speed.

The given assertion is correct. The speed of light is constant for all waves in the electromagnetic spectrum. Other characteristics of waves, such as frequency, energy, and wavelength, depend upon the type of wave as well as the source that generates it. The velocity, however, remains constant.

Determine whether the following statement is true or false: To improve the precision, high-frequency propagation is being used.

The stated assertion is correct. It is true that a high frequency of propagation is required to improve precision.

What is the electromagnetic wave propagation sequence?