As a result, both fields can spread across vast distances in space, creating a “leapfrog” effect. An electromagnetic field is a type of synergistic field that allows wireless communications, broadcasting, and control systems to function.

Electrostatics is a branch of physics concerned with the study of electric charges at rest (static electricity). Some materials, such as amber, have been known since classical times to attract lightweight particles after rubbing. The word ‘electricity’ was thus derived from the Greek word v (elektron), (amber).

The force between an electron and a proton, which make up a hydrogen atom, is approximately 36 orders of magnitude greater than the gravitational force acting between them. There are numerous examples of electrostatic phenomena, ranging from the simple attraction of plastic wrap to one’s hand after removing it from a package to the apparently spontaneous explosion of grain silos, the damage of electronic components during manufacturing, and the operation of photocopiers and laser printers.

The study of the accumulation of charge on the surface of things as a result of contact with other surfaces is known as electrostatics. Although charge exchange occurs whenever two surfaces come into contact and separate, the effects of charge exchange are usually only noticed when at least one of the surfaces has a high resistance to electrical flow, because of the charges that transfer are trapped there for a long enough time to be observed.

These charges then remain attached to the object until they either bleed off to the ground or are quickly neutralized by a discharge. The neutralization of charge built up in the body as a result of contact with insulated surfaces causes a static “shock.” 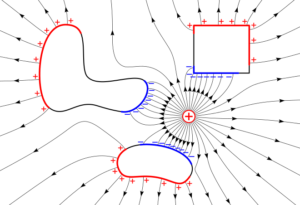 Because of electrostatic induction, the electrostatic field (lines with arrows) of a nearby positive charge (+ causes the mobile charges in conductive objects to separate. Negative charges (blue) are attracted to the surface of the object facing the external charge and move there.

Positive charges (red) are repelled and move to the surface, away from the surface. Because these induced surface charges are precisely the right size and shape, their opposing electric field cancels the external charge’s electric field throughout the interior of the metal.

The Electric Field formula is written as

The electric force is given by if q and Q are two charges separated by r.

When a voltage V is applied over a certain distance r, the electric field formula is as follows:

The electric field is defined as the force per unit of positive charge.

The electric field is measured in SI units NC-1

Question: How does a positive charge affect the radius of a flexible ring?

Answer: Increases as a result of repulsion

Question: A positively charged glass rod attracts a suspended straw ball. Is it safe to assume that the ball is negatively charged?