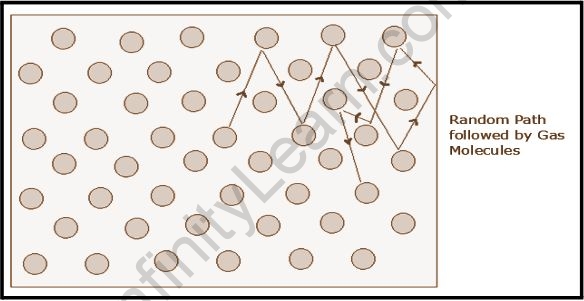 To explain the structure and composition of molecules in relation to submicroscopic particles, the kinetic theory was introduced. The theory discusses the pressure increase caused by the constant movement and collision of submicroscopic particles. It also discusses other gas properties like temperature, pressure, volume, viscosity, diffusion, thermal conductivity, and so on. The theory establishes a link between microscopic particles and macroscopic properties. The molecule of gas is constantly in motion and collides with each other and the container’s walls; in such a case, learning the dynamics of the gases is both difficult and important.

Consider the motion of a gas molecule contained within an ideal gas. Furthermore, a typical molecule inside an ideal gas will abruptly change its direction and speed. This is due to the fact that it collides with other molecules of the same gas in an elastic manner. The molecule between the collisions must move in a straight line at a constant speed. Most importantly, this holds true for all of the molecules in the gas. Measuring the random movement of gas molecules is undoubtedly difficult. As a result, one must attempt to calculate its mean free path. The symbol represents the average distance travelled by a molecule between collisions. Furthermore, it varies inversely with N/V, which is the number of molecules per unit volume or the density of the molecules.

Concept of the mean free path:

As the name implies, is the average distance travelled by any molecule between collisions. We expect it to vary inversely with N/V, which is the number of molecules per unit volume or the density of molecules because the more molecules there are, the more likely they will collide with each other, reducing the mean free path, and also inversely proportional to the diameter d of the molecules because if the molecules were point masses, they would never collide. Because it is difficult to measure or describe the random motion of gas molecules, we attempt to calculate their mean free path.

As a result, the mean free path can be calculated as follows:

The equation has been approximated because it has been assumed that all particles are stationary in relation to the particle under consideration. Most notably, all of the molecules are moving relative to one another. In the preceding equation, two velocities have been cancelled. Furthermore, v in the numerator denotes the average velocity, whereas v in the denominator denotes the relative velocity. As a result, there is a factor 2– the difference between the two.

At sea level, the mean free path is 0.1 micrometres.

Density: As density increases, molecules get closer together, increasing the number of collisions and decreasing the mean free path.

Pressure, temperature, and other physical factors all influence gas density and thus the mean free path.

The horizontal component of a projectile’s speed remains constant throughout its flight. This is due to the fact that no horizontal force acts on the projectile after it has been launched. As a result, the projectile moves horizontally at a constant speed. The following equation is used to calculate the distance covered by a projectile: Distance is equal to speed multiplied by time.

m is a reference point taken at the origin of two coordinate axes, namely the X-axis and the Y-axis, for the analysis of two-dimensional projectile motion.

Question 1:What is the relationship between temperature and the mean free path?

Question 2:What exactly is the mean free path in electronics?

Answer: In electronics, the mean free path of a charge carrier in metal is proportional to its electrical mobility.

Question 3:What are the Different Types of Projectile Motion?