Reactions appear all around us, and they happen all the time. Specific reactions, on the other hand, may have harmful effects on humans if they get into close proximity. Humankind has discovered several ways to manipulate the atom to unleash its intrinsic energy using two separate approaches. Chemical reactions are examples of events that can be both beneficial and detrimental, especially if they are not managed properly. The chemical reaction is the production of a new compound molecule as a result of the rearrangement of valence electrons in interacting atoms and molecules with the release or absorption of energy. The nucleus is not harmed in any way during this process. The electrons in the inner orbits are unaffected as well.

Nuclear reactions, such as fission reactions, are, however, regarded to be extremely energetic in nature. It signifies that the process generates a lot of energy while it’s running. The definition of nuclear fission is when a particle or atom divides into two smaller and lighter nuclei during a nuclear process. It’s also worth noting that when an atom splits, the two daughter nuclei weigh less than the parent nucleus. The definition of nuclear fission is that it will continue to break atoms one by one. It also produces a tremendous quantity of energy. As a result, this type of reaction is frequently explosive. Uranium, for example, is a nuclear-reactive element. Nuclear fission can happen naturally in certain instances or be caused by bombarding the nucleus with various particles (e.g., protons, neutrons, or alpha particles) or by gamma-ray radiation.

During nuclear fission, a tremendous quantity of energy is released, resulting in the formation of radioactive materials and the discharge of many neutrons. Such neutrons can create a chain fission process in the uranium or plutonium nucleus, releasing further neutrons. This can lead to an uncontrollable chain reaction that continues until all of the initial material has been used up, releasing a tremendous quantity of energy in the process. 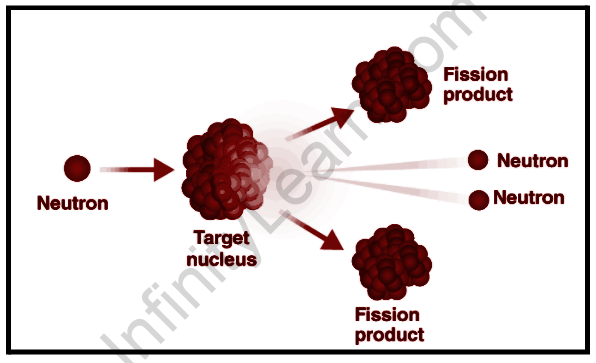 Nuclear Fission Energy: The release of a substantial amount of energy occurs when neutrons split. There is a high repulsive force between the protons throughout this process. The powerful nuclear force, however, binds them together. Each proton typically exerts a repulsive force of 20N on every other proton, which is comparable to the force exerted by a hand resting on a person’s lap. For these atomic particles, this is a massive force. Because the products of fission are more stable, subsequent splitting is difficult. The nucleonic mass decreases as the binding energy for fission products increases. The release of energy is the outcome of the large binding energy and decreased mass. Nuclear binding energy and mass flaws are also referred to as the same thing. 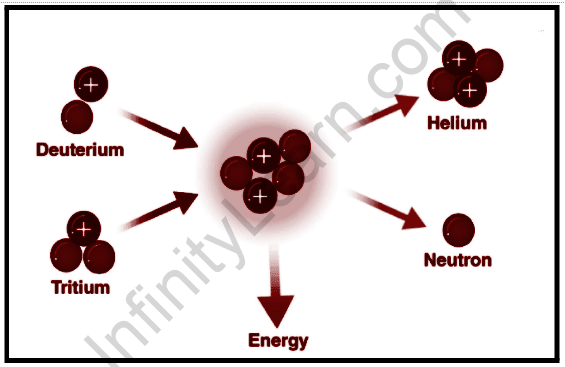 On Earth, this is accomplished by mixing two hydrogen isotopes, such as deuterium and tritium. Hydrogen, which is made up of a single proton and an electron, is the lightest of all the elements in the periodic table. Deuterium contains an extra neutron in its nucleus, allowing it to replace one of the hydrogen atoms in water to create heavy water. Tritium carries two more neutrons than hydrogen, making it three times heavier.

The components of deuterium and tritium are recombined to generate a helium atom and a fast neutron when they fuse together. The residual mass is converted into kinetic energy as the two heavy isotopes are recombined into helium atoms and a neutron.

For the nuclear fusion reaction to occur, the involved nuclei must be brought together. They should be brought near enough so that nuclear forces activate and bind the nuclei together.

The heat contained in steam is converted into mechanical energy using a steam turbine. In a nuclear power plant, the generator turns the turbine’s kinetic energy into electrical energy. The cooling system extracts heat from the reactor core and delivers it to another part of the station, where it can be used to generate power or do other beneficial tasks. 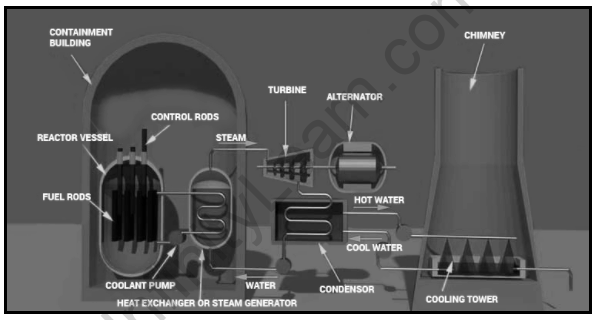 Safety valves can be used in an emergency to prevent pipes from bursting or the reactor from exploding. The feedwater system regulates the water level in the steam generator and nuclear reactor. Most nuclear power plants require two different off-site power sources that feed station service transformers that are sufficiently spaced in the switchyard and can receive power from several transmission lines.

In nuclear reactors, the element uranium is used as a fuel to initiate the chain reaction. Uranium is a relatively heavy element that may be found largely in seawater and rocks.

(a) the nuclear unit is generating power to a rated capacity

(c) there will be danger of the nuclear spread

(b) concrete and bricks

What are nuclear fission and nuclear fusion?

Both nuclear fission and fusion reactions emit a significant quantity of energy. The former entails the division of an atom into two. The latter entails the fusion of two atoms into a single atom.

What is nuclear energy?

The energy released during nuclear reactions, such as fusion and fission, is referred to as nuclear energy. During the breaking and combining of atoms, these reactions generate a lot of heat or energy.

What is the life span of a nuclear power station?

A nuclear power plant's average lifespan is 40 years. Modern pressurized water reactors, on the other hand, have a 60-year lifespan.