As the name implies, electromagnetic radiation involves the propagation of both electric and magnetic forces. There is a component electric field and a component magnetic field at each point in an ordinary light beam, which are perpendicular to each other and fluctuates in all directions perpendicular to the beam’s propagation path. The component electric field oscillates in plane-polarised light in the same way as it does in regular light, but the direction of oscillation is contained inside a single plane.

Light is made up of vibrations as well, but this time they are electromagnetic. Some materials have the ability to filter out all vibrations save those in a single plane, resulting in-plane polarised light.

The most well-known example is the material used to make Polaroid sunglasses. If you put one pair of Polaroid sunglasses on and place another pair in front of them such that the glasses are held vertically rather than horizontally, no light will pass through and you will see nothing but blackness. In the string analogy, this is analogous to the two slits at right angles. The polaroids have been described as “crossed.”

The rotation can be done in either a clockwise or anticlockwise direction. If the original polarisation plane was vertical, you could have either of these outcomes.

How can you know if the polarization plane has been rotated?

Plane polarised light is affected by or not means if the polarization plane has been rotated, we can tell with the help of Polarimeter 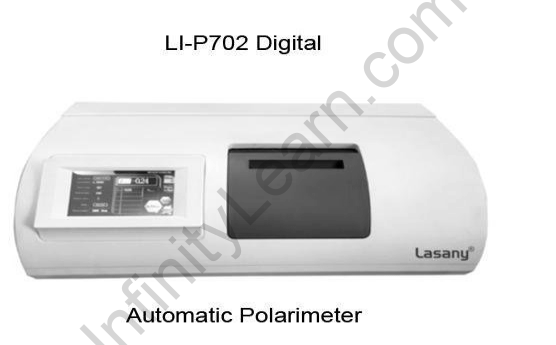 Initially, the polarimeter is set up with water in the tube. Water is not optically active, meaning it has no influence on the polarization plane. The analyzer is turned until no light is visible through the instrument. After that, the polaroids are “crossed.” Now you fill the tube with a solution of optically active material. It spins the light’s polarisation plane, allowing some light to pass through because the analyzer is no longer at right angles to it. To turn off the light again, you’d have to rotate the analyzer. It’s simple to identify whether the polarisation plane has been spun clockwise or anti-clockwise, and by how much.

Different ways through which light can be Polarized

By refracting light off of nonmetallic surfaces, unpolarized light can become polarized. The amount of polarization that happens is determined by the angle at which light strikes the surface and the material that it is composed of. Metallic surfaces reflect light in a number of vibrational directions, resulting in unpolarized reflected light. Nonmetallic surfaces, such as asphalt highways, snowfields, and water, however, reflect light in such a way that vibrations are concentrated in a plane parallel to the reflecting surface. If the extent of polarization is large, a person viewing objects through light reflected off nonmetallic surfaces may often sense a glare.

The refraction of light can also cause polarisation. When a beam of light travels through one material and into another, it is called refraction. The course of the beam changes direction at the interface between the two materials. The refracted beam becomes polarised to some extent. Polarization happens more frequently in a plane perpendicular to the surface. A unique crystal that serves as a double-refracting crystal is frequently used in Science courses to explain the polarisation of refracted light.

A unique crystal that serves as a double-refracting crystal is used in physics lessons. Iceland Spar, a relatively unusual type of mineral calcite, refracts light in two directions. When light enters the crystal, it is split into two beams. As a result, when an object is examined through an Iceland Spar crystal, two pictures are visible. The two images are the consequence of light refraction in two directions. Both refracted light beams are polarised, with one pointing parallel to the surface and the other pointing perpendicular to it. A polarising filter can be used to totally block one of the images because these two refracted rays are polarized with a perpendicular orientation.

The light is entirely blocked by the filter if the polarization axis is positioned perpendicular to the plane of polarised light; yet, the second image is as brilliant as it can be. The second image reappears when the filter is turned 90 degrees in either direction, but the first image vanishes. That’s a fascinating observation that would never have been made if light didn’t behave in a wavelike manner.

When light is scattered while traveling through a medium, polarisation occurs. When light touches a material’s atoms, it frequently causes the atoms’ electrons to vibrate. The vibrating electrons then generate their own electromagnetic wave, which propagates in all directions. This newly created wave collides with nearby atoms, causing their electrons to vibrate at the same frequency as before. These moving electrons generate a new electromagnetic wave, which is projected outward in all directions once more.

Light is distributed throughout the medium as a result of the absorption and reemission of light waves. This scattered light is polarised to some extent. As light flows through our environment, it exhibits polarisation due to scattering. The glare in the sky is frequently caused by scattered light. Photographers are well aware that partial polarisation of dispersed light results in images with washed-out skies. With the use of a Polaroid filter, the problem can be readily solved. The partially polarized light is blocked and the glare is lessened when the filter is turned. The mechanics of polarization and Polaroid filters are the photographic secret to capturing a brilliant blue sky as the backdrop of a stunning foreground.

Plane Polarized Light is affected by what?

When you shine a beam of polarised monochromatic light (light with only one frequency - in other words, a single color) into a solution of an optically active substance, the light's polarization plane rotates. The rotation can be done in either a clockwise or counterclockwise direction.

When light is polarised, what happens?

Unpolarized light is defined as a light wave that vibrates in more than one plane. Light waves that are polarised have vibrations that occur in a single plane. Polarization is the process of converting unpolarized light into polarised light.

Is it possible that polarised light is harmful?

In addition to UV radiation, the world of vision contains undesired glare, reflections, and colors that are continually distracting. These rays induce continual physical pain such as eye strain, headaches, and a decrease of visual acuity, which can lead to temporary vision loss if left untreated for several days.

Is it true that polarized lenses protect your eyes?

Polarized lenses shield your eyes from the sun's harmful rays. They provide UV (ultraviolet) protection from the sun's rays as well as provide other advantages.