A Zener Diode additionally called a breakdown diode, may be a heavily doped semiconductor unit that’s designed to work within the reverse direction. Once the voltage across the terminals of a Zener diode is reversed and also the potential reaches the Zener Voltage (knee voltage), the junction breaks down and the current flows in the reverse direction. This result is understood because of the Zener Effect.

It does not solely permit current to flow from anode to cathode but also, in the reverse direction on reaching the Zener voltage. Because of this functionality, Zener diodes are the foremost usually used semiconductor diodes. Zener diodes are factory-made with an excellent style of Zener voltages (Vz) and a few are even created variable.

Zener diode is comparable to the normal PN junction diode. But, ordinarily, it’s operated within the reverse biased condition. This diode may be a specially designed, extremely doped PN junction diode. Therefore, we tend to might say that a heavily doped semiconductor diode, designed to work in the reverse direction is noted because of the Zener diode. Also, we may say that the diode that is specially designed for optimizing the breakdown region is the Zener diode.

How does a Zener Diode work in reverse bias?

A Zener diode operates similarly to a standard diode once it’s forward-biased. However, when connected in reverse biased mode, a little leak current flows through the diode. Because the reverse voltage will increase to the planned breakdown voltage (Vz), this starts flowing through the diode. This increases to a maximum, that is set by the series resistor, when which it stabilizes and remains constant over a good variety of applied voltage.

There are two types of breakdowns for a Zener Diode:

Because of this continuous collision, an oversized variety of free electrons are generated as a result of the electrical current within the diode quickly increasing. This boost in current might for good destroy the conventional diode, however, a Zener diode is meant to work underneath avalanche breakdown and might sustain the fast spike of current. Avalanche breakdown happens in Zener diodes with Zener voltage (Vz) larger than 6V

When the applied reverse bias voltage reaches nearer to the Zener voltage, the electrical field within the depletion region gets robust enough to tug electrons from their valence band. The valence electrons that gain decent energy from the strong electric field of the depletion region become independent from the parent atom. At the Zener breakdown region, a tiny low increase in the voltage leads to a fast increase of the electric current.

Zener Diode as a Voltage Regulator

There is a series resistor connected to the circuit to limit this into the diode. It’s connected to the positive terminal of the d.c. It works in much the way the reverse-biased may add breakdown conditions. We tend to not use a standard junction diode as the low power rating diode can get broken after we apply reverse bias higher than its breakdown voltage. Once the minimum input voltage and also the most load current is applied, the Zener diode current must always be minimum.

Since the input voltage and the needed output voltage is known, it is easier to settle on a Zener diode with a voltage or so adequate to the load voltage, 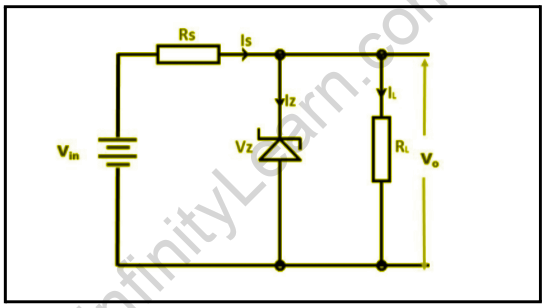 The worth of the series resistor is written as,

Some commonly used specifications for Zener diodes are as follows:

What is the difference between a Zener diode and a normal diode?

A Zener diode differs from a normal diode primarily in the passage of current. Unlike normal diodes, Zener diodes allow current to flow in both directions.

What is a Zener breakdown?

It is known as Zener breakdown when the breakdown occurs in both the rectifier and the Zener diode.

Why is Zener Diode used as a regulator?