For example, the atoms that make up carbon differ from those that make up iron, which differs from those that makeup gold. Every element is represented by a one-of-a-kind symbol made up of one, two, or three letters derived from either the current element name or its original (often Latin) name. Carbon, hydrogen, and oxygen, for example, are represented by the letters C, H, and O, respectively. The symbol for iron is Fe, derived from the Latin word Ferrum. The fundamental principle of the science of chemistry is that atoms from different elements can combine to form chemical compounds.

Methane, for example, is known to contain distinct CH4 molecules because it is formed from the elements carbon and hydrogen in the ratio of four hydrogen atoms for each carbon atom. A compound’s formula, such as CH4 , specifies the types of atoms present, with subscripts indicating the relative number of atoms (although the numeral 1 is never written). H2O molecules are found in water, which is a chemical compound composed of hydrogen and oxygen in the ratio of two hydrogen atoms for every oxygen atom. Sodium chloride is a chemical compound formed in a 1:1 ratio of sodium (Na) and chlorine (Cl). Despite the fact that sodium chloride has the formula NaCl, the compound does not contain actual NaCl molecules. Rather, it contains an equal number of sodium ions with a positive charge (Na+) and chloride ions with a negative charge (Cl).

Chemistry is the study of matter’s transformation from one form to another. These changes are frequently caused by the interaction of two different types of matter. Certain rules govern the combination of different elements to form various compounds. These are known as the laws of chemical combinations.

The following are the five laws of chemical combination: 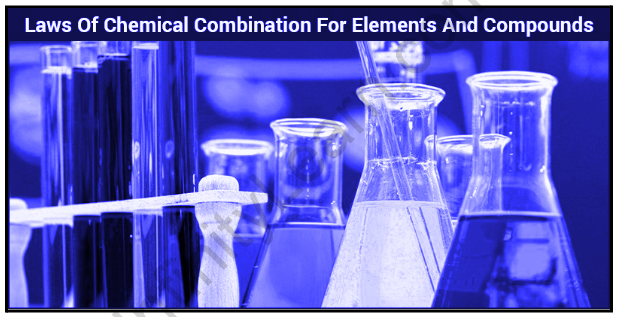 Law of constant proportions: Proust stated this law. It states that a pure chemical compound always consists of the same elements combined in a fixed proportion by weight, for example, H2O prepared from any source contains H &O in the ratio of 1: 8 by mass. Elements are always combined in specific definite proportions only, according to the law of definite proportions. It means that elements always combine in a specific ratio regardless of the number of reactants used or the source from which they were obtained. For example, regardless of the total amount of ethyl alcohol present, its combination consists of 52% carbon, 35% oxygen, and 13% hydrogen by weight. According to the law of constant proportions, this is the case.

State the laws of chemical combination

In 1808, Gay Lussac passed this rule based on his observations. This law states that when gases are produced or combined in a chemical reaction, they do so in a simple volume ratio as long as all of the gases are at the same temperature and pressure. This law can be thought of as a variant of the law of definite proportions. The only difference between these two chemical combination laws is that Gay Lussac’s Law is stated in terms of volume, whereas the law of definite proportions is stated in terms of mass.

Inflating a balloon with helium gas. The overall volume of the balloon increases as the total number of moles of helium gas blown into it increases.

Q. What are the four chemical combination laws?

Ans: Chemical Combination Laws for Elements and Compounds. The Law of Mass Conservation. In a nutshell, this law states that matter cannot be created or destroyed.

What is the definition of the Law of Chemical Combination?

If two elements combine to form more than one compound, the masses of these elements in the reaction are in the ratio of small whole numbers,’ according to this law.