We can consider chemistry as the study of matter’s pattern and transformation. The substance is another term that is frequently used interchangeably with the matter, but it has a more limited definition in chemistry. Chemistry is also treated as the study of the behavior of matter. Chemistry is concerned with the composition, structure, and properties of matter, as well as the phenomena that occur when different types of matter change. Matter theory encompasses the evolving ideas and systems used to describe and explain the material world. A large part of matter theory was based on an element theory. The matter is classified into different categories based on the physical properties it exhibits and the states in which it exists; these are referred to as states of matter. Changes in the properties of matter caused by external influences such as pressure and temperature distinguish states of matter. A break in one of these characteristics frequently distinguishes states.

Knowing the distinctions between Solid, Liquid, and Gas is critical because they represent the three states of matter. As we all know, everything around us is matter, and it is critical to understand how matter is classified, primarily into Solids, Liquids, and Gases. A solid is a rigid substance with low intermolecular spacing and high intermolecular forces that binds all molecules within it together. Liquids, on the other hand, are less rigid and easy to flow. They typically have properties that allow them to flow from higher to lower levels. When compared to solids, this is a unique property of liquids.

Fluids include both liquids and gases. The possible explanation for this is their ability to flow. A liquid, on the other hand, is not the same as a gas at the molecular level. Liquids exhibit a variety of properties and behaviours, ranging from forces of attraction to the effects of physical properties.

The following characteristics are shared by all liquids:

Liquids exhibit the above-mentioned characteristics under normal temperature, pressure, and volume conditions. When physical conditions change, the basic properties of liquids change dramatically. Aside from the characteristics listed above, liquids have the following features:

Vapour pressure is a liquid property related to evaporation. In other words, it is the pressure exerted by vapour at a given temperature and in a closed system when it is in equilibrium with its phases, either solid or liquid. Vapour pressure is typically calculated in standard pressure units. The pascal (Pa) is the SI unit, and one pascal equals one newton per square meter.

If a container is filled with a liquid, the vapours from that liquid occupy its walls. Liquids have the unique property of transforming into vapours as the temperature rises! In general, vapours from an aqueous substance occupy the walls of the unfilled portion of the container and exert pressure on those walls; this pressure is referred to as the vapour pressure.

In the beginning, the vapour pressure rises, but after a while, it stabilises. Due to evaporation, some of the molecules in the container will be converted to vapour over time. As a result, the volume of liquid decreases while the volume of vapour increases. The evaporated gas molecules will move in a random pattern along with the empty space in the container. As a result of this random movement, some of these molecules will come into contact with the container’s uppermost layer and begin to condense. Gradually, an equilibrium between the liquid and vapour phases is reached. The equilibrium vapour pressure of saturated vapour pressure is the vapour pressure at the point of equilibrium. The entire phenomenon of vapour formation is temperature-dependent and thus tends to increase with increasing temperature. 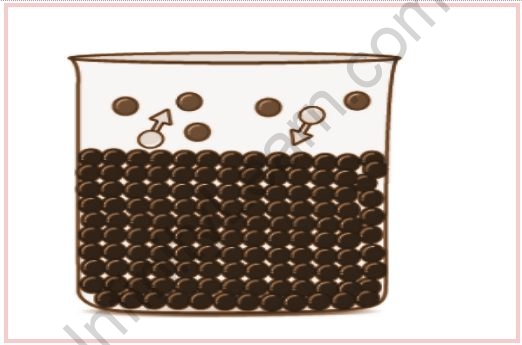 The factors influencing vapour pressure are:

What is the Difference Between Vapour Pressure and Atmospheric Pressure?

What is the property of a material which processes maximum vapour pressure?

What is the effect of boiling point in vapour pressure?