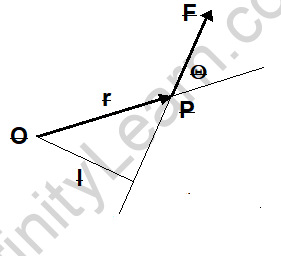 The measure of the force that may spin a body about a specific axis or point is known as the moment of force. The moment arm is a significant factor that refers to the distance between the force and the rotational axis. The lever, gear, pulley, and other simple machines all need the concept of the moment arm to function. If the system is in equilibrium, the sum of clockwise and anticlockwise moments is equal, according to the principle of the moment.

A force’s moment is a measurement of its proclivity to induce a body to revolve around a given point or axis. This is distinct from a body’s inclination to move or translate in the force’s direction. A force must act on the body in such a way that the body begins to twist in order for a moment to develop. This happens whenever a force is applied that does not travel through the body’s centroid. A moment occurs when a force does not have an equal and opposite force acting in the same direction.

The Equation for the moment of a force:

The following is the moment formula:

M = a moment of force

d = the distance from the fixed axis and

The moment of inertia is a crucial concept that is addressed in the bulk of physics problems involving mass in rotating motion. MOI is a popular method for calculating angular momentum. We’ll study more about this topic in the next paragraphs.

The amount represented by the body opposing angular acceleration, which would be the sum of the product of each particle’s mass as well as its square of the distance from the axis of rotation, is known as the moment of inertia. It is a number that defines the amount of torque necessary for a given angular acceleration in a rotational axis in simple terms. The moment of inertia is also known as the angular mass or rotational inertia.

The moment of inertia dimensional formula is as follows:

The following things influence the moment of inertia:

Rotating body systems can be further classified as follows:

A rigid body is one that has a predetermined shape and cannot vary. The particle distance between them is constant and does not change. A system of particles is a rigid body made up of an unlimited number of particles.

A body’s entire mass is considered to be concentrated at a place known as the center of mass (COM) The center of mass of a single rigid body happens to coincide with its centroid. However, in the instance of hollow bodies, the COM can be found both inside and outside the body. For example, in the case of shells and the like, it is found outside of the body.

Significance of moment of a force in NEET exam:

In a force’s moment of inertia, the purpose of NEET themes is to explain and offer the most likely questions that will appear on the exam. These can be described in simple terms with the help of notes from expert academics in the field, which are available on the Infinity Learn online platform. Multiple-choice questions are simple to practice if students have a good understanding of the concepts covered throughout the curriculum.

A force’s moment Important NEET questions help students prepare for multiple-choice questions, which are common in the required test.

Question 1: What method can we use to compute the time?

Question 2: What is a real-life example of a force moment?

Answer: A see-saw that we swing in a park is the greatest example of a moment of force in our everyday routines. If we put weight on both sides of a see-saw to balance the moment, the swing stays in a balanced position, but if we put additional weight to one side of the see-saw, the swing does not stay in a balanced state. As a result, this is referred to as an imbalanced instant. Torque is used to measure the turning effect. There are many more examples of the concept of moment of force in our daily lives.

Question 3: What is the Inertia Dimensional Formula?

Answer: The moment of inertia for a point mass is just the mass times the square of the perpendicular distance to the rotation axis, which is an extensive (additive) feature.