There are two ways for multiplying two vectors, both of which have been shown to be extremely useful while solving numericals. We know these two methods as the Scalar product and Vector Product.

Without a question, mathematics is the language of physics. When one has a good understanding of mathematics, it is easier to articulate, interpret, and apply physical principles. We’ll also use algebra, trigonometry, geometry, vector algebra, differential calculus, and integral calculus on a frequent basis. This course will discuss vectors, vector equality, unit vectors, and position vectors. Using simple algebraic concepts, certain physical quantities can be completely described mathematically (with units provided) and added. And even if you’re just a science student, you’ll need to understand vectors. It’s almost as though you can’t think of mechanics without them. For conceptual clarity, the principles are essential. Continue to explore our page for more physics-related information.

Using two vectors as inputs, we can create a scalar product 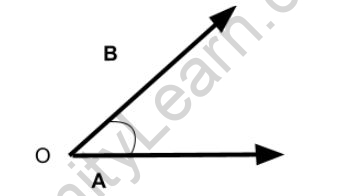 When two vectors are positioned tail to tail, the scalar product is equal to the product of their magnitudes and the cosine of the smaller angle between them. 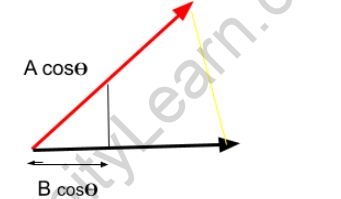 Thus we can conclude that AB=ABcos?

As the dot product of a scalar and a vector is forbidden, it follows the Non-Associative property.

Unit vectors in the directions of the x, y, and z axes are i, j, and k, respectively

Using two vectors, find the angle between them

When two vectors are written in cartesian form, one of the most typical applications of the scalar product is to compute the angle between them.

From the scalar product’s definition,

By rearrangement, we can get the following expression for cos θ:

Force and displacement together determine the work done by a constant force.

Geometrically, the area of the parallelogram formed by two vectors is called the cross product or Vector Multiplication/product.

The name “cross product” comes from the symbol used to symbolize this operation, which is a huge diagonal cross (). This product is also known as the vector product because it contains magnitude and direction.

A unit vector perpendicular to the plane produced by the two vectors is n (n hat). The right-hand rule determines the direction of n.

The cross product is distributive

It’s worth noting that the magnitude of the cross product of any unit vector with any other is one. (After all, the sine of 90° is one.) However, the orientation is not immediately apparent. Using the right-hand rule for cross-multiplication we can determine the direction of the two vectors as well as their product. It is extremely crucial to order the operations correctly because cross multiplication is not commutative.

Any cyclic product of the three coordinate axes is positive, whereas any anti-cyclic product is negative in a right-handed coordinate system, which is the most common coordinate system used in physics and mathematics. Consider a clock that displays the three letters x-y-z instead of the traditional twelve numerals. A cyclic and positive product of these three letters is one that runs around the clock in the same direction as the sequence x-y-z. Anti Cyclic and negative products are those that run in the opposite direction.

Question 1: How Do You Calculate Vector Scalar Multiplication?

Question 2: Why is the Scalar Multiplication of Vectors called the Dot Product?

Answer: Because all of the components of the solution are scalar values, the dot product is called scalar multiplication of vectors.

Question 3: What is the definition of vector multiplication?

Answer: When two vectors are multiplied together, the outcome is a third vector that is perpendicular to the two original vectors. The area of the parallelogram between them determines the magnitude of the resultant vector, and the right-hand thumb rule determines its direction. a b = c, where c is the cross product of the two vectors a and b, or vector multiplication.