An atom can be compared to a motel. There are fixed sites where we are likely to discover electrons, just as there are fixed numbers of rooms where people may stay. These permanent positions are referred to as orbitals, and their location is determined by their quantum number. We can define the location of an electron within the atomic structure using quantum numbers. The initial quantum number, n, represents the electron shell and represents the atomic structure’s energy levels. Consider it like the hotel floors: the lower the floor (i.e. the smaller the value of n), the lower the energy of that electron shell. We identify subshells defined by the second quantum number within each shell. Depending on their energy level, these subshells take on various shapes. Consider these subshells to be hotel rooms, with each room holding a different number of orbitals. Each of these orbitals carries exactly two electrons, while the third quantum number determines the number of orbitals per subshell.

Electrons are much smaller than protons and neutrons, weighing over 1,800 times less than either. The electron configuration of an atom is the orbital description of the electron locations in a typical atom. Chemists can anticipate an atom’s attributes, such as stability, boiling temperature, and conductivity, using the electron configuration and physical principles. It is the method or distribution of electrons in an atom’s orbitals. An atom is made up of subatomic particles such as electrons, protons, and neutrons, with only the number of electrons being taken into account for electronic arrangement. Electrons are supplied in such a way that a high constant configuration is achieved.

The electron shells are denoted by the letters K, L, M, N, O, P, and Q, or by the numbers 1, 2, 3, 4, 5, 6, and 7, counting from the innermost to the outermost shell. Every shell is made up of one or more subshells, which are made up of atomic orbitals and are referred to as subshells.

In chemistry, Pauli’s Exclusion Principle, along with Aufbau’s Principle and Hund’s Rule, is one of the most significant principles. It is critical for students to understand, especially when studying electrons. Pauli’s Exclusion Principle essentially helps us comprehend the electron configurations in atoms and molecules and also provides an explanation for the periodic table’s classification of elements.

No two electrons in an atom may have the same set of four quantum numbers, according to Pauli’s Exclusion principle. Only two electrons can coexist in the same orbital, and they must have opposing spins.

Pauli’s Exclusion principle applies not just to electrons but also to other particles such as half-integer spin. Wolfgang Pauli developed the principle in 1925. It is unimportant for particles with integer spins, such as bosons, which have symmetric wave functions. Furthermore, unlike fermions, bosons can share or have the same quantum states

As an example of Pauli’s Exclusion principle, consider a neutral helium atom. The atom is connected to two electrons, which occupy the outermost shell with opposing signs. 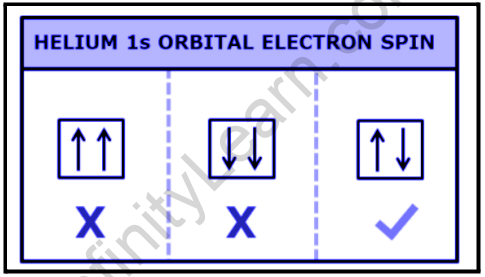 The Pauli exclusion principle describes how electrons occupy a single orbital. Many subshells, however, include more than one orbital. The two portions of Hund’s rule describe how to fill a subshell containing many orbitals.

When electrons are allowed to orbitals, an electron strives to fill all of the orbitals with equivalent energy (also known as degenerate orbitals) before merging with another electron in a half-filled orbital. Atoms in ground states have as many unpaired electrons as possible.

Consider how electrons behave in the same way that the same poles on an attraction would if they came into contact with each other; as negatively charged electrons fill orbitals, they initially strive to go as far away from each other as possible before having to match up.

Additionally, quantum-mechanical simulations have revealed that only electrons in filled orbitals are tiny, adequately screened, or insulated from the nucleus.

Hund’s rule is significant because it dictates the sequence in which electrons are filled in a set of orbitals. The orbital filling is a bonded diagram that shows the placement of electrons in distinct orbitals.

What is the difference between Hund’s rule and Pauli’s Exclusion Principle?

Hund's rule predicts the presence of two or more degenerate states and how electrons can occupy them. Whereas Pauli's exclusion principle indicates which types of electrons can be filled together.

Why do we refer to Hund's rule as the rule of maximum multiplicity?

Hund's rule is known as the rule of maximum multiplicity because, among all potential electronic configurations, only the one with the highest total spin value is accurate.

Why is Hund’s rule not applicable for all elements?

What configurations are in violation of Hund's principle?

Before you deposit two electrons in the same orbital, each orbital with the same energy must have at least one electron with the same spin.