Poisson’s ratio is the inverse of the ratio of transverse strain to lateral or axial strain in mechanics. It is also the ratio of the total transversal expansion to the amount of axial compression for low values of these changes, and it is named after Simeon Poisson and symbolized by the Greek letter ‘nu’.

“The proportion of transverse contractions strain to longitudinal extension strain in the site of the stretching force,” as defined by Poisson. Here,

The Lateral or Transverse Strain is what it’s called εt

The Longitudinal or Axial Strain is denoted by the letter εl

The Poisson’s Ratio is symbolized by v

The change in dimension (length, breadth, area, etc.) divided by the original dimension is the strain.

When a material is extended in one direction, it compresses in the opposite direction, and vice versa. The Poisson’s ratio is to measure the magnitude of this occurrence. When a rubber band is stretched, for example, it tends to get thinner.

In the direction of the stretching force, it is the ratio of transverse contraction strain to longitudinal extension strain. With the application of force on a body, stress and strain relationships can be formed.

Although the longitudinal strain is positive, the negative Poisson ratio indicates that the material will exhibit positive strain in the transverse direction. Poisson’s ratio is usually in the range of 0 to 0.5 for most materials.

Simply explained, Poisson’s ratio is a measurement of how much a material’s width or diameter changes when it is dragged lengthwise. It is the ratio of the change in lateral (transverse) strain to the change in linear (axial) strain, in more technical language. Pulling a rubber band is the most basic example of this. The rubber band’s width narrows dramatically as it is stretched in one direction. That indicates a high Poisson’s ratio.

Some Points to Consider Regarding Poisson’s Ratio Value

For material, the Poisson’s Ratio is defined as:

Poisson’s Ratio is usually significant since most common materials get narrower in the opposing or cross direction when extended. Most materials resist changes in volume, as defined by the bulk modulus K also known as B, more than changes in shape, as determined by the shear modulus G. The shape distortion also causes the interatomic connections to realign.

The Poisson’s Ratio governs the curvature of a bar or plate in the direction perpendicular to the bending. In the circumstance of bending a rubber, the anticlastic curvature is plainly visible.

The physical properties of anisotropic solids, such as honeycombs, single crystals, and various fibrous composites, are affected by the direction in which they are stretched or bent, including the Poisson’s ratio and Elastic Moduli. Because of the huge magnitude of this type of anisotropic material, Poisson’s ratio might be positive or negative. 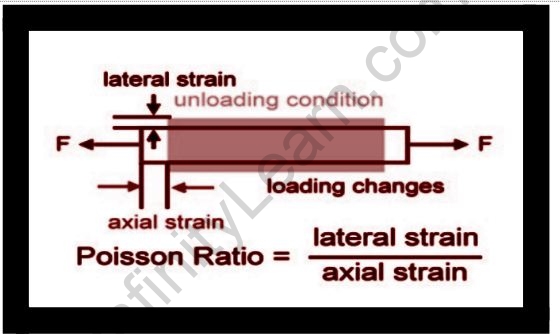 The entire world has changed to an online method of schooling in the post-pandemic age. It’s critical at this moment to select the correct educator so that you can receive a high-quality education while sitting at home. Infinity Learn has a number of advantages over the competitors, including:

Experts and experienced instructors in the subject provide answers. The answers are in accordance with CBSE and NCERT criteria for the NEET test, assisting students in achieving higher results. The courses are reasonably priced, and there are some free courses available for new students to test out. On the same platform, there is a diverse choice of courses ranging from kindergarten to twelfth grade, as well as particular programs for competitive exams such as NEET.

Question 2: What is Poisson’s ratio?

Answer: In the orientation of the displacements, the ratio of transverse strain to longitudinal strain.

Question 3: What are the units of Poisson’s ratio?

Question 4: What are some possible applications of the Poisson effect in the real world?

Answer: These are some examples of how the Poisson effects are used in the real world.

Using “Cork” as a bottle stopper: Due to its extremely low Poisson ratio, cork is the most suited material for use as a bottle stopper. This means that even when heavy compression is applied on both sides of the cork, the cork does not change much. When rubber is employed as a bottle stopper, however, it will stretch laterally if subjected to axial compression, causing the stopper to become trapped in the bottle.