Reflection of waves: We are constantly confronted with scenarios involving wave reflection; for example, in the phenomena of echo, sound reflected from the distant object hits the listener with a slight delay. We’ll learn more about wave reflection from a fixed and free end in this section.

Progressive waves follow the same rules as light waves when it comes to reflection. A progressive wave’s reflection from a boundary surface is affected by the nature of the boundary surface. The reflection at the surface can be one of two sorts, depending on the circumstances of the progressing wave. Reflection at the hard wall occurs when a progressive wave going through a rarer barrier is reflected from a denser medium, while Reflection at the free end occurs when a progressive wave traveling through a denser medium is reflected from a rare medium. The phase of reflected sound waves of rough surfaces and the reflection of string waves at their ends affects whether the reflected and incident waves will interfere constructively or destructively. There is a phase reversal for string waves near the ends of strings, which is vital for generating resonance in strings. The appearance of propagation is lost because the reflected and incident waves add to each other as moving in opposite directions, and the resulting vibration is named a standing wave.

The reflected wave is illustrated as when the wave is reflected at an open border.

When a pulse hits the end of a medium, what happens to it? Yet if the medium is set in space or free to travel at its end determines the result.

A barrier between two media, as well as an object which will reflect the wave, induce reflection. A mirror, a metal sheet, or just air can be used as the object. The border can be solid (such as a wall), liquid (such as water), or gaseous (such as air) (like air). When an object is a level and perpendicular to the incoming wave’s direction, reflection occurs. When this happens, every portion of a single wavelength reflects back at the same angle. 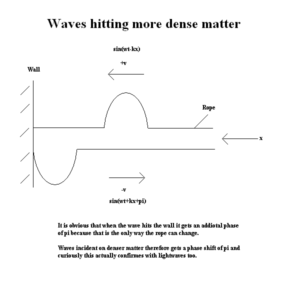 Significance of Reflection of waves in NEET exam:

Infinity Learn would be the first preference for many School students when it comes to NEET exams due to the obvious clarity and legitimacy of the solutions. We double-check that the answers are genuine and that they might benefit all pupils. Students may swiftly complete their Class 12 Physics syllabus, which covers the pressure chapter and its major ideas, with the aid of Infinity Learn’s solutions.

“Keep practicing,” as we’ve all heard. This is also true for pupils in Class 12. Students can only attain exceptional marks on their board examination if they put what they’ve studied into practice. This not only allows students to identify their strong and weak areas, but it also helps them to feel less anxious about their exams.

Question 1: What is the purpose of reflection? Who came up with it?

Answer: Reflection’s purpose is to offer information about the thing, to reflect light, and to serve as protective layers. Its creator is unknown, but its use is thought to date back to antiquity.

Question 2: What is the process of reflection?

Answer: In general, there are two forms of reflection: specular and diffuse reflection. Smooth surfaces such as metal, glassware, liquid, and polished stone reflect light in a mirror-like manner. Light scatters in various directions as it meets with a rough surface, resulting in diffuse reflection.

Question 3. Once specular or diffuse reflections occur, what actually occurs?

Answer: They cause the observer’s visual system to produce an image! Because light bounces off one side of an object and back to the eye via the other, the eye sees it through its surface! The brain deduces from this that there has to be an imaginary object behind or in the real one, resulting in an image! Humans can learn about their environment by looking at images produced by reflections in this way! Nowadays, technologies such as televisions use a similar concept, but instead of projecting sound, they transmit visuals.