Zeolites are aluminosilicate minerals with microporous pores that are extensively employed as adsorbents and catalysts in industry. Axel Fredrik Cronstedt, a Swedish mineralogist, invented the word zeolite in 1756 after seeing that rapidly heating a material, thought to be stilbite, produced huge volumes of steam from water absorbed by the material. Based on this, he named the substance zeolite, which comes from the Greek words “to boil” and “stone.” Zeolites are found in nature, but they are also manufactured on a huge scale in the industrial sector. The International Zeolite Association Structure Commission examines each novel zeolite structure and assigns it a three-letter identifier.

Zeolites do have a porous structure that allows a wide range of cations to pass through, including Na+, K+, Ca2+, Mg2+, and others. In a contact solution, these positive ions are kept loosely and can easily be exchanged for others. Analcime, chabazite, clinoptilolite, heulandite, natrolite, phillipsite, and stilbite are some of the more prevalent mineral zeolites. The formula for natrolite is Na2Al2Si3O102H2O, which is an example of a zeolite mineral formula. Cation exchanged zeolites have varying acidities and catalyze a variety of processes. Natural zeolites are formed when alkaline groundwater reacts with volcanic rocks and ash deposits.

Other minerals, metals, quartz, or other zeolites can contaminate zeolites to variable degrees; therefore, they are rarely pure. As a result, naturally occurring zeolites are not used in many critical commercial applications that need uniformity and purity. Zeolites are aluminosilicate members of the “molecular sieves” family of microporous solids, consisting primarily of silicon, aluminum, and oxygen, and with the general formula MxAlxSi1xO2yH2O, where M is either a metal ion or H+. Although there are many different types of formations, they all start with the corner oxygen atoms of AlO4 and SiO4 tetrahedra being linked to form covalent network structures.

The following are some of the most prevalent applications for zeolites.

Zeolites’ cage-like structure makes them extremely useful for ion exchange. Hard water, for example, is filtered via a column of sodium-containing zeolites. Calcium and magnesium ions are reserved by zeolites, while sodium ions are out, resulting in water softening and sodium improvement. Nowadays, zeolites are employed in detergent to remove magnesium and calcium from the water, making it softer and enhancing the detergent’s efficacy.

Cracking, isomerization, and hydrocarbon synthesis are all reactions in which zeolites are used as a catalyst. Zeolite is a highly effective catalyst due to its porous structure. Furthermore, because the pores of a given zeolite are of a defined form and size, zeolite is also referred to as shape-selective catalysis because it is selective on specific molecules.

Zeolites are being used to adsorb a wide variety of compounds due to their high adsorption capacity. In the fields of purification, drying, and separation, they have a wide range of uses.

Radioactive particles may be successfully removed from nuclear waste using zeolites. It could also be used to remove heavy hazardous metal-contaminated water or soil.

Thomsonites are a type of uncommon zeolite mineral that is gathered as a gemstone.

There are many different types of silicates, such as zeolites. Silicate has the structure SiO44-, with four oxygen atoms linked to one silicon atom. When two silicate units are brought together, they form a ring, a chain, and a three-dimensional structure. Glass and cement are two significant man-made silicates. Positively charged metal ions neutralize negative charges on the silicate structure. A three-dimensional network is formed when all four corners are shared with other tetrahedral units. Feldspar, Zeolites, Mica, and Asbestos, for example. Glass and cement are illustrations of man-made silicates. 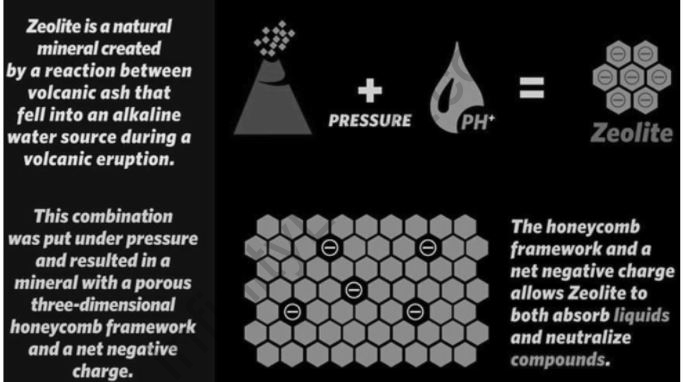 Significance of zeolites in NEET exam

Students can access assets online at their leisure and from the comfort of their own homes, thanks to Infinity Learn’s review materials. It is written by subject-matter experts and is 100 percent accurate and reliable for tests like the NEET. Infinity Learn’s review material is available for download in pdf format, which students can save for future reference or view on the web. The review resources help standby quickly resolve their questions.

How harmful are zeolites?

When breathed, some zeolites, such as natural fibrous zeolites (Erionite), can cause cancer.

Are zeolites soluble in water?

Zeolites are insoluble in water; they can be filtered out of an aqueous solution.

How are zeolites used to purify water?

Zeolites are utilized for biological water treatment because of their high porosity and huge surface area. Zeolites also filter out unwanted cations, radioactive elements, and heavy metals from water.