We come into contact with a wide range of gaseous solutions in our daily lives. Water can dissolve a wide range of gases. Ammonia and hydrogen chloride gas are highly soluble in water. Oxygen, nitrogen, and helium, on the other hand, are barely soluble in water. The presence of oxygen in water is critical to aquatic life because it is responsible for their survival. The solubility of only a few systems is known with enough precision to present a set of recommended values. This is true for measurements near atmospheric pressure as well as at high pressures. Despite the fact that at least two workers have studied a large number of systems, the range of pressures and/or temperatures is frequently sufficiently different to make meaningful comparison impossible.

The solubility of gases in liquids is of involvement to many scientific and technological disciplines, not just chemistry. As a result, a variety of methods for reporting gas solubility have been used in the primary literature, and it has occasionally been necessary to use multiple quantities in the compiled tables due to a lack of available information. Whenever possible, the gas solubility has been conveyed as a mole fraction of the gaseous component in the liquid phase. The pressure units that are used are bar, pascal, millimeters of mercury, and atmosphere. Temperatures are given in degrees Kelvin.

The distinction between gas-liquid solubility and vapor-liquid equilibrium, on the other hand, is not always clear. Equilibria formed between methane and propane above the critical temperature of methane and below the critical temperature of propane may be classified as vapor-liquid equilibrium or gas-liquid solubility, depending on the pressure range considered and the worker involved.

The challenge stems in part from our inability to distinguish between a gas, a vapor, and a liquid, as discussed in numerous textbooks. In these volumes, we took a fairly liberal approach, including systems that some workers may regard as vapor-liquid equilibria.

Solubility of gases in liquids

Just about all gases are soluble in water, albeit to varying degrees. The presence of aquatic life in lakes, rivers, seas, and other bodies of water is due to the dissolution of oxygen gas in the water. Few gases are also soluble in solvents such as ethyl alcohol and benzene.

The solubility of every gas in a specific liquid is the volume of the gas in cc (converted to STP) that can dissolve in a unit volume (1cc) of the liquid to form the saturated solution at the temperature of the experiment and at a pressure of one atmosphere.

This process of expressing concentration is known as the absorption coefficient of the gas, and it is usually denoted by α.

The solubility of a gas in a liquid at a given temperature is also expressed in terms of molarity (the amount of gas dissolved per liter of solvent to form the saturated solution) or mole fraction of the gas.

Factors affecting the solubility of a gas in liquid

Nature of the Gas and the Solvent:

Water only slightly dissolves hydrogen, oxygen, nitrogen, and other gases, whereas carbon dioxide, hydrochloric acid, ammonia, and other gases are extremely soluble. The latter gases have a higher solubility due to their reactivity with the solvent.

At the same temperature and pressure, oxygen, nitrogen, and carbon dioxide are much more soluble in ethyl alcohol than in water, whereas H2S and NH3 are more soluble in water than ethyl alcohol. The greatest solubility of the gas in a solvent is due to the gas’s chemical similarity to the solvent.

In general, the solubility of a gas decreases as temperature rises. It is normal for some gas to be expelled from the solution when the gas solution is heated. The same result can also be obtained in the opposite direction.

The dissolution of a gas in a liquid is an exothermic process, which means that heat is being evolved.

Using Le Chatelier’s principle, the increasing temperature would cause the equilibrium to shift backward, resulting in a decrease insolubility.

It would be the most key factor affecting a gas’s solubility in a liquid at a given temperature. With a little thought, we can see that as we compress the gas over the liquid (i.e., raise the pressure), the solubility rises.

Example of solubility of a gas in liquid

Pressure has a much greater influence on gaseous substances than on solids and liquids. When the partial pressure of a gas increases, so does the possibility of its solubility. A soda bottle is an example of a high-pressure container for CO2.

Solubility of gas in liquid with temperature

The majority of solid substances become more soluble as temperature rises. However, the effect is difficult to predict and varies greatly between solutes. The real reason for this is that most gases dissolve in solution in an exothermic process. As a result, heat is released as the gas dissolves. This is very similar to why vapour pressure rises as temperature rises. When the temperature rises, so do the kinetic energy. The higher the kinetic energy, the more motion in the gas molecules, which breaks intermolecular bonds and allows the molecules to escape from the solution. 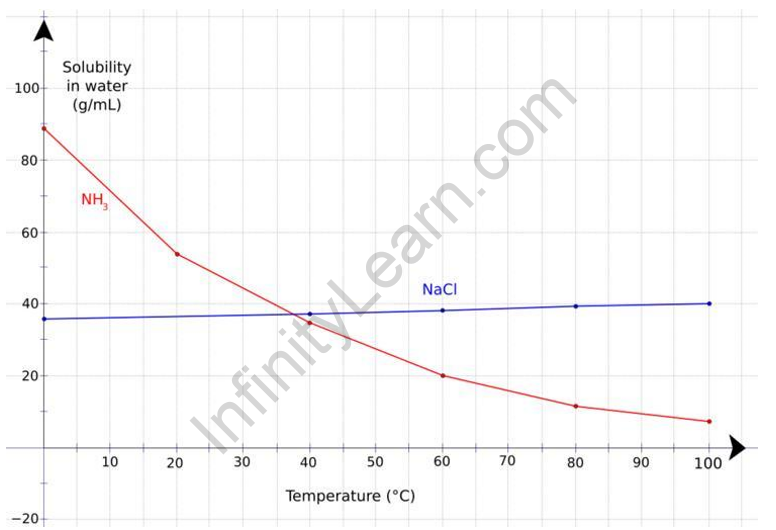 The information about the solubility of gases in liquids from various chemistry-related articles is available here. The solubility of every gas in a specific liquid is the volume of the gas in cc (converted to STP) that can dissolve in a unit volume (1cc) of the liquid to form the saturated solution at the temperature of the experiment and at a pressure of one atmosphere. Students who want to flourish in chemistry need to be well known about this concept to get deep knowledge about it to do well on their exams. Factors affecting the solubility of a gas in liquid and examples of solubility of a gas in liquid are provided here to assist students in effectively understanding the respective topic. Continue to visit our website for additional chemistry help

What are the important factors that affect the solubility of a gas in a liquid?

The nature of the gas and solvent, temperature, and pressure are all factors that influence a gas's solubility in a liquid.

How does temperature affect the solubility of a gas in liquid?

The solubility of a reduces as temperature rises. It is normal for some gas to be expelled from the solution when the gas solution is heated.

What kind of solution is formed when gas is dissolved in liquid?

When a gas dissolves in a liquid, such as carbon dioxide in water, a homogeneous solution is formed.