The words acid and base have been defined in a variety of ways, depending on how the qualities of acidity and basicity are seen. Acids and bases were first characterized by Arrhenius as substances that ionize to generate hydrogen and hydroxide ions, respectively. According to the Lowry-Bronsted definition, an acid is a proton giver and a base is a proton acceptor. Acids are said to be molecules or ions that can coordinate with unshared electron pairs, and bases are molecules or ions that have unshared electron pairs that can be shared with acids, according to the Lewis definition. In order to become acidic in the Lewis sense, a molecule must be electron deficient. The most basic acid-base notion is this. Lowery Bronstead acids are all Lewis acids, but the Lewis definition also covers boron trifluoride, aluminum chloride, and other reagents. There are three alternative hypotheses that have been proposed for defining acids and bases. These hypotheses include the Arrhenius theory, the Bronsted-Lowry theory, and the Lewis theory of acids and bases. 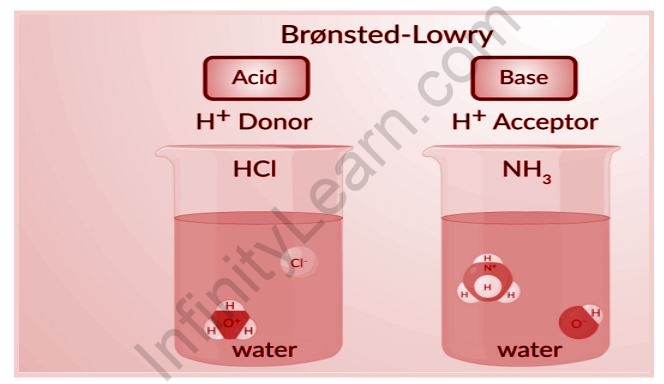 The information about the strength of acids and bases from various chemistry-related articles are available here. It is found that the amount of an acid or base that ionizes in solution determines its strength. Students who want to flourish in chemistry need to be well known about this to get deep knowledge about it to do well on their exams. The definition and brief explanations are provided here to assist students in effectively understanding the respective topic. Continue to visit our website for additional chemistry help.

Whenever acids and bases react with other substances, such as water, they dissociate, or break up, to form ions, or electrically charged particles. One proton (positive charge) and one electron make up a hydrogen atom (negative charge). The positive and negative charges in the hydrogen atom balance each other, resulting in a neutral atom with no net charge. When a hydrogen atom loses an electron, it becomes a positively-charged ion. In acid-base chemistry, the phrases hydrogen ion and proton are sometimes used interchangeably because the hydrogen ion now only has one proton. Acids and bases have a variety of characteristics that aid in their identification. Their ability to shed or receive a hydrogen ion, however, is what distinguishes them the most.

Depending on how many hydrogen ions they release in the solution, acids can be strong or weak. The acid becomes stronger as more hydrogen ions are released. When a strong acid like hydrogen chloride is dissolved in water, it dissociates entirely, leaving only hydrogen ions and chloride ions in the solution; no hydrogen chloride molecules remain. A weak acid in solution, on the other hand, will not entirely dissociate. Only a small number of citric acid molecules break down to form hydrogen ions and citrate ions when dissolved in water; the majority of citric acid molecules remain unaltered in the solution. Citric acid is therefore a weak acid. Mineral, or inorganic, acids are the most powerful acids. Sulfuric acid, nitric acid, and hydrochloric acid are examples of these acids. Strong acids are used to manufacture fertilizers, dyes, pharmaceuticals, and some types of batteries, among other things, in industry and manufacturing. Citrus fruits (citric acid), milk and yogurt (lactic acid), apples (malic acid), vinegar (acetic acid), meats and other protein-rich foods (amino acids), and even soda pop (all contain weak organic acids) (carboxylic acid). Hundreds of weak acids found in living organisms, such as lactic acid, amino acids, fatty acids, and nucleic acids like DNA (deoxyribonucleic acid) and RNA, are vital to life (ribonucleic acid).

Depending on how many hydroxide ions they release in the solution, bases can be strong or weak. The stronger the base, the more hydroxide ions are discharged. Strong bases, such as sodium hydroxide, dissociate entirely in solution, whereas weak bases disintegrate only a part of their molecules when dissolved in water. Only a small percentage of ammonia molecules break down to create hydroxide ions and ammonium ions when it is introduced to water. Because the majority of ammonia molecules remain intact in the solution, ammonia is classified as a weak base. The strongest bases include metal and earth metal hydroxides and oxides, such as calcium hydroxide, potassium hydroxide, strontium oxide, and sodium hydroxide. The latter is a common ingredient in soaps and cleaning products, including lye, drain openers, and oven cleaners, which are highly caustic. Ammonia, milk of magnesia, and carbonates like baking soda (sodium bicarbonate) and limestone are weaker bases (calcium carbonate). Blood, seawater, toothpaste, and egg whites are all slightly basic.

Strength of Acid and Base

The amount of an acid or base that ionizes in solution determines its strength. In solution, a strong acid or base totally ionizes. An acid and a base react to form a salt in a neutralization reaction. Salt is an ionic substance in which the cation is a base and the anion is an acid.

The ability of an acid to lose its H+ ion is measured by its acid strength. A strong acid’s dissociation in solution is nearly complete, with the exception of its most concentrated solutions. Powerful acids include hydrochloric acid, perchloric acid, nitric acid, and sulfuric acid.

In the presence of both the undissociated acid and its dissociation products in the solution, a weak acid partially dissociates. Take, for instance, acetic acid. We can say that a weak organic acid’s strength is determined by substituent effects. The strength of an inorganic acid is also affected by the oxidation state of the atom to which the proton may bond. Bear in mind that the solvent has an impact on acid strength. For example, hydrogen chloride (HCl) is a strong acid in an aqueous solution, but it is a weak acid when dissolved in glacial acetic acid.

Relative Strength of Acid and Base

Water is amphoteric, and all strong acids and bases are equally ionized. As a result, in water, they have the same acidic or basic strength. The leveling effect is the term for this.

Acid strength is also affected by the solvent. Acetic acid is not responsive to protons and must be forced to take them up. So, acids HClO4, H2SO4, HCl, and HNO3 which have closely the same strength in water follow the order of HClO4>H2SO4>HCl>HNO3 in acetic acid.

Solvents can be used to determine the true strength of acids. Solvents are categorized into four kinds based on proton interaction:

(4) Aprotic solvents: Benzene, carbon tetrachloride, carbon disulphide, and others, do not donate or receive protons.

What makes an acid strong or weak?

What are the seven-strong acids?

What is the most powerful acid?

Since fluoroantimonic acid is a combination of hydrofluoric acid and pentafluoride antimony, and carborane has a pH of -18, it is the most powerful solar acid.