A chemical change, often known as a chemical reaction, converts one or more pure compounds into one or more distinct pure ones. Chemical changes result in the synthesis of molecules that aid in the growth of our food, increase the productivity of our life, relieve heartburn, and much more. Whenever one or more compounds, known as reactants, are converted into one or more distinct substances, known as products, a chemical reaction occurs. Substances include chemical elements and compounds. In a chemical reaction, the constituent atoms of the reactants are rearranged, resulting in the production of diverse substances as products. Chemical changes are an important part of technology, society, and even life itself. Chemical processes have been studied and practised for thousands of years, including burning fuels, smelting iron, producing glass and pottery, brewing beer, and making wine and cheese. Chemical reactions can be found in the Earth’s geology, atmosphere, and oceans, as well as a variety of complicated living activities.

The idea of a chemical reaction has been around for roughly 250 years. Its roots may be traced back to early studies that categorised chemicals as elements and compounds, as well as hypotheses that explained how these processes worked. The development of the concept of a chemical reaction was crucial in defining chemistry as we know it today.

Reactants are molecules that combine to make new compounds, whereas products are newly formed compounds. We can say that chemical reactions play a significant role in a wide range of industries, cultures, and even our everyday lives. Rusting of iron, pottery, and wine fermentation, to name a few, are all examples of them in our environment. Physical changes such as precipitation, heat production, colour change, and so on all require a chemical change to occur in a chemical reaction.

Except for the nonmetals in Group VIIIA, hydrogen combines with every element in the periodic table (He, Ne, Ar, Kr, Xe, and Rn). Although it is commonly stated that carbon is included in more compounds than any other element, this is not always the case. Hydrogen is found in nearly all carbon molecules, and it forms compounds with essentially all other elements. Despite the fact that the term hydride literally refers to compounds containing an H– ion, hydrogen compounds are usually referred to as hydrides.

The reaction of oxygen with another element usually leads to the development of an oxide, which is a binary molecule. Oxidation is the name for the reaction. The oxidation reaction between oxygen and sodium, for example, creates sodium oxide. In many circumstances, an element can produce several oxides.

Trends in Chemical Reactivity with Hydrogen

Hydrogen atoms are extremely reactive. It forms hydrides with most elements (for example, sodium hydride, NaH) and decreases metallic oxides, resulting in the elemental state of the metal. The energy released by this reaction heats the surfaces of metals that do not combine with hydrogen to produce stable hydrides (e.g., platinum), which catalyse the recombination of hydrogen atoms to form hydrogen molecules.

At room temperature, molecular hydrogen can react with a wide range of elements and compounds, but the reaction rates are usually so low that they are inconsequential. This seeming inertness is due in part to the molecule’s extremely high dissociation energy. The reaction rates, on the other hand, are quite fast at high temperatures.

Reaction of Alkali Metals with Hydrogen

The chemical elements in Group 1 of the periodic table are known as alkali metals. Lithium, sodium, potassium, rubidium, cesium, and francium are alkali metals. Hydrogen is not strictly an alkali metal because it rarely shows similar characteristics, despite being included in Group 1 due to its electrical arrangement. Since these elements react with water to generate hydroxide ions, causing alkaline solutions, the word “alkali” comes from the Arabic word “al qali,” which means “from ashes.” Alkali metals have a number of characteristics in addition to being highly reactive.

Metallic hydride is generated when an alkali metal reacts with hydrogen.

Consider M as an alkali metal.

Here, the transformation of hydrogen can be represented as H2+2e–→2H–

Note that alkali metal is oxidized to M+ions. 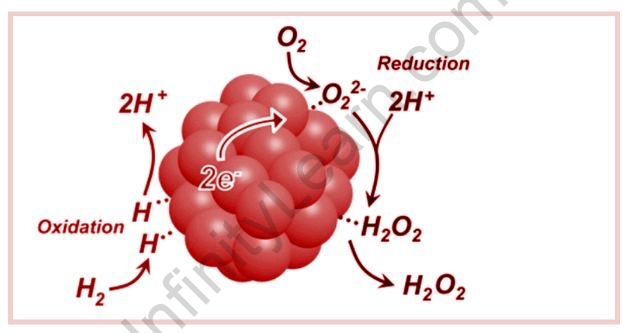 Why is Hydrogen Peroxide stored in plastic containers?

When hydrogen peroxide is exposed to sunshine, it decomposes, and residues of alkali metals catalyse the process. So, it is maintained in dark, wax-lined glass or plastic containers.

Do group 1 metals react with hydrogen?

Coldwater reacts vigorously with all alkali metals. Each process releases hydrogen gas, resulting in the formation of metal hydroxide. The reaction's quickness and intensity increase as you move through the group.

Which element in Group 2 does not react with hydrogen?

The only alkaline earth metal that does not react with water is beryllium (Be). Its tiny size and high ionisation energy compared to the other elements in the group account for this.