Zener diodes are semiconductor devices that cause the current to flow in a backward or forward direction, and they tend to be heavily doped and possess a P-N junction. When a certain voltage is reached, it is specifically designed to reverse the flow of current.

In addition to having a reverse breakdown voltage, the Zener diode also has a reverse breakdown current. But what does that mean? When the diode is in reversible mode, the current conducted by it remains constant, and the voltage drop stays constant, no matter how much voltage or force is applied. Therefore, the Zener diode is thought to be extremely useful in electronic circuits when it comes to voltage regulation.

How is the Zener Diode Circuit Depicted?

How does the Zener Diode Work?

Thousands of impurities are added to the semiconductor material of the Zener diode to boost its conductivity. Thus, the depletion region becomes thinner. Even when a small voltage is applied to the system, the application of electric fields is intensified across this depleted region.

Zener diodes consist of silicon semiconductors with a p-n junction that is specifically designed to operate in reverse bias. The diode operates as a normal signal diode when forward biased, but when a reverse bias is applied, the voltage remains constant for a wide range of currents. DC circuits use it as a voltage regulator because of this characteristic.

Zener diodes are voltage regulators that are primarily designed to maintain a constant voltage. Let us say if a Zener voltage of 5 V is used, then the voltage becomes constant at 5 V, and it does not change. 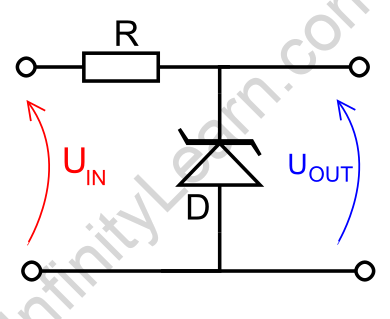 What is a Voltage Regulator?

A voltage regulator regulates the level of voltage. The input voltage is essentially stepped down to the desired level and then maintained at that level throughout the output supply. When a load is applied, a voltage drop is avoided because of this. Voltage regulators are used primarily for two reasons:

Various components of the plant are controlled by voltage regulators, such as computers, generators, and alternators.

Zener Diode as a Voltage Regulator

A series resistor limits the current passing through the diode by connecting it to the circuit. Normally, the positive terminal of the d.c. is connected to the pulsator. The reverse-biassed device works in such a way that it can also operate under breakdown conditions. A simple junction diode cannot be used because the diode’s low power rating could be damaged if reverse bias is applied above its breakdown voltage. The Zener diode current should always be minimum when the minimum input voltage and the maximum load current are applied.

Since the input voltage and the required output voltage are known, it is easier to select a Zener diode with a voltage that is approximately equal to the load voltage, i.e., VZ = VL.

VI Characteristics of the Zener Diode

Under these conditions, the current flow in the reverse direction, which is what is known as a breakdown voltage. As we can see from the graphs, the Zener diode possesses a considerable amount of resistance, as well as a nonlinear breakdown.

Hence, the Zener diode’s voltage is given by the following equation – V = VZ + IZRZ

Applications of the Zener Diode

Zener diodes are used in industrial and commercial settings. Voltage stabilizers sustain a large amount of voltage. A constant voltage will be supplied to the power load from here since the voltage fluctuates. As a result, the Zener diode is usually connected in parallel with the load. As a result of its ability to maintain a constant voltage, it also acts as a voltage regulator or a stabilizer. A Zener diode can be used in a commercial setting.

Industrial and commercial buildings use large power meters that are vulnerable to meter overloads. Parallel connections between these multimeters and the Zener diode, however, prevent accidental system overloads. When an overload occurs, most of the current flows through the diode, which protects the meter.

Zener diodes are connected back to back and in opposite directions, forming a series circuit with the resistance of the circuit, which makes it possible to transform a sine wave into a square wave.

In addition, certain specifications exist for Zener diodes, such as Zener voltage, the minimum current needed for breakdown, the maximum current, and the power that can be dissipated by the Zener diode. Zener diodes also have certain specifications regarding temperature stability and Zener resistance. A conventional electric current flows from anode to cathode in the Zener diode. A reverse bias is required to make this silicon semiconductor work. The flow of current can, however, be reversed if a specific voltage is exceeded, known as the breakdown voltage or Zener voltage. Additionally, the Zener diode is operated at reverse voltage to guarantee a constant voltage for a wide range of currents.

What is the factor needed in order to keep the diode in the breakdown region?

Voltage regulation requires a minimum amount of reverse current for the diode to remain in the breakdown region.

How should the breakdown region be set during diode manufacturing?

It is possible to control the breakdown region during the manufacturing of a diode by controlling the doping level.

How does a Zener breakdown occur?

When the input varies within limits, how does the DC output voltage fluctuate?

In voltage regulating devices, a constant DC output voltage is obtained when the input varies within limits.