SECTION A
Question.1. Define microeconomics.
Answer. Microeconomics is the study of individual economic units, such as a firm, an industry, a consumer etc.

Question.2. Give one reason for a shift in demand curve.
Answer. A demand curve shifts when there is a change in a factor other than the own price of the product.

Question.4. What is fire behaviour of Marginal Revenue in a market in which a firm can sell any quantity of the output it produces at a given price?
Answer. In the given situation marginal revenue in the market will remain the same throughout. This situation relates to perfect competition.

Question.6. Define Production Possibility Curve. Explain why it is downward sloping from left to right
Answer. A Production Possibility Curve may be defined as a curve which represents various possible combinations of two goods that can be produced with the full use of given resources in an economy under given technological conditions.
A PP curve slopes downwards from left to right because of the fact that in a combination if we produce more of one good, with given fixed resources, we shall produce less of the other good.

Question.7. A consumer consumes only two goods X and Y and is in equilibrium. Price of X falls. Explain the reaction of the consumer through the Utility Analysis.
Answer. The basic condition fulfilling the condition of consumer’s equilibrium in the case of two commodities according to utility analysis is:
\(\frac { { MU }_{ x } }{ { P }_{ x } } =\frac { { MU }_{ y } }{ { P }_{ y } } \)
As such, if the price of X falls, per rupee marginal utility of X will increase and becomes more titan that of Y. The consumer will transfer expenditure from Y to X, and will buy more of X. 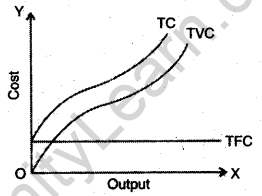 Question. 9. A producer starts a Business by investing his own savings and hiring the labour. Identify implicit and explicit costs from this information. Explain.
Answer. In the given situation:

Question.10. Explain the implications of large number of sellers in a perfectly competitive market.
Answer. See Q. 10, 2011 (I Outside Delhi).
Or
Explain why them are only a few firms in an oligopoly market.
Answer. Under oligopoly there are only a few large firms, each producing a significant portion of the market output. Barriers, such as, patents, large capital requirement control over raw material, etc., prevent new firms from entering into industry. Small firms, in general, do not survive because of the threat of competition, though they are independent to exist.

Question.12. A consumer buys 10 units of a commodity at a price of Rs 10 per unit. He incurs an expenditure of Rs 200 on buying 20 units. Calculate price elasticity of demand by the percentage method. Comment upon the shape of demand curve based on this information.
Answer.

Since the price remains the same the shape of demand curve will be perfectly elastic. Demand Curve will be parallel to x-axis.

Question.13. What does the Law of Variable Proportions show? State the behaviour of marginal product according to this law.
Answer. The law of variable proportions shows that if one factor is variable and others are fixed how the total product will be affected; According to this law if the units of a variable factor are increased the total product will increase at an increasing rate. This law can be divided into three distinct stages. The behaviour of MP curve will be as shown in the diagram.

Question.14. Explain the difference between
(i) inferior goods and normal goods and (ii) cardinal utility and ordinal utility.
Give example in each case.
Answer. (i) Inferior goods are those whose demand falls with the rise in income. This is because as income rises, purchasing power increases and the consumers substitutes superior goods for inferior goods. In short, those goods whose income effect is negative are called inferior goods.
Normal goods are those whose demand increases with the increase in income and vice versa. Consumers buy more of the good when their incomes increase.
In short, when income increases the demand for normal goods increases and the demand for inferior goods fall.
(ii) Cardinal utility means the utility derived from units consumed in exact numerical terms. Such as utility obtained from the first unit consumed is 10, the second unit consumed is 8 etc. Utility analysis approach explaining consumer’s behaviour is based on cardinal approach. However, its shortcoming has been pointed out by indifference curve approach.
Ordinal utility approach explains consumer’s behaviour in the order of preferences of the combinations of two commodities instead of adopting cardinal utility approach. Indifference curve approach is based on ordinal approach. It is because of the fact that indifference curves express level of satisfaction, which may be more or less, rather than expressing tire level of satisfaction numerically. 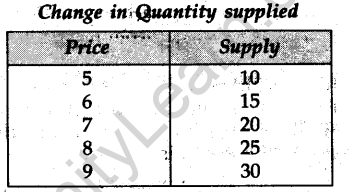 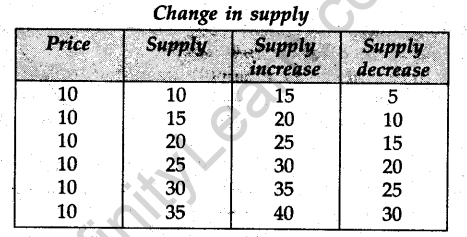 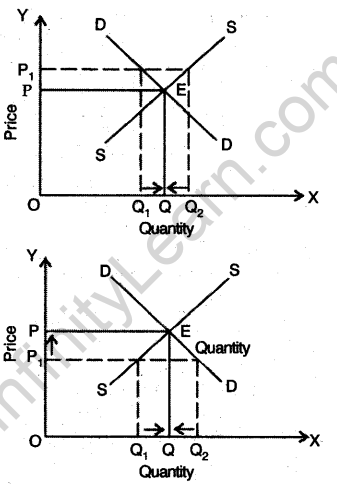 SECTION B
Question.17. Define flow variable.
Answer. Flow variables are those economic concepts whose value can be ascertained during a period of time, such as income.

Question.18. Define consumption goods.
Answer. Consumption goods are those goods which are used by the consumers for satisfaction and are not used in the process of further production.

Question.19. What are time deposits?
Answer. Those bank deposits which cannot be withdrawn before the expiry of the stipulated time for which they are deposited are time deposits, such as fixed deposits.

Question.20. Define a ‘direct tax’.
Answer. Direct tax is a tax where the liability to pay and the incidence of tax is on the same person or firm such as income tax.

Question.23. Explain the ‘standard of deferred payment’ function of money.
Answer. Money, besides being the basis of current transactions, is also the basis of deferred^ payments. Only money is such a commodity in whose form accounts of deferred payments can be maintained in such a way so that both creditors and debtors do not stand to lose. Money makes borrowings and lendings convenient.

Question.24. Outline the steps taken in deriving Consumption Curve from the Saving Curve. Use diagram.
Answer. Before deriving consumption curve from saving curve we should know tire following:

Question.26. Distinguish between revenue receipts and capital receipts in a government budget. Give example in each case.
Answer. Revenue receipts are those which do not either create a liability or lead to a reduction in assets, such as tax revenue.
Capital receipts are those which government raises through funds either by incurring liability or by disposing of assets, such as recovery of loans, loans raised etc.
Or
Explain the role of government budget in bringing economic stability.
Answer. See Q. 27 (Or), 2011 (I Outside Delhi).

Question.27. Should the following be treated as final expenditure or intermediate expenditure? Give reasons for your answer.

Question.29. Explain the concept of ‘fiscal deficit’ in a government budget. What does it indicate?
Answer. Fiscal deficit refers to the excess of total expenditure over total receipts (excluding borrowings) during the given fiscal year. It indicates that:

Question.31. Explain the concept of ‘inflationary gap’. Also explain the role of ‘legal reserves’ in reducing it.
Answer. Inflationary Gap: See Q. 30 (Point (i) Legal Reserves), 2011 (I Outside Delhi) .
Or
Explain the concept of ‘deflationary gap’. Also explain the role of ‘margin requirements’ in reducing it
Answer. The situation of deflationary gap arises when equilibrium is established before the stage of full employment of output. In this case, at the full employment level, aggregate demand is less than aggregate supply. In the diagram, EF is deflationary gap. For removing deflationary gap, the level of aggregate demand needs to be increased. Margin requirements. Commercial banks never advance loans to its customers equal to the full value of collateral or securities. They always keep a margin with them/ such as keeping & margin of 20% and advancing loans equal to 80% of value of security. The rate of margin is determined by the Central bank. In the situation of deflationary gap, this margin will be reduced so that more credit may be advanced against the security. 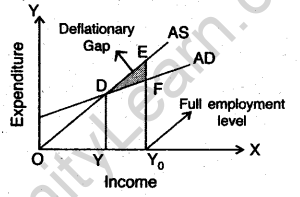 Note : Except for the following questions, all the remaining questions have been asked in Set I.
SECTION A
Question.6. Explain the central problem of ‘how to produce’.
Answer. A number of methods are available to a producer for producing a good. In such a situation a producer decides as to how the factors should be combined in producing a commodity. A producer will use that combination or technique of production where the cost is minimum. This is the central problem of how to produce in an economy. This problem arises because of the fact that resources are scarce.

Question.9. A farmer takes a farm on rent and carries on farming with the help of family members. Identify explicit and implicit costs from this information. Explain.
Answer.

Question.11. Define a budget line. When can it shift to the right?
Answer. A budget line graphically shows die many combinations of two goods which a consumer can buy, given his entire income and the prices of the two goods. A budget line, as shown in the diagram is a straight line having a negative slope.
There will be a shift in the budget line towards right when:

Question.12. A consumer buys 14 units of a good at a price of Rs 8 per unit. At price Rs 7 per unit he spends Rs 98 on the good. Calculate price elasticity of demand by the percentage method. Comment upon the shape of demand curve based on this information.
Answer.

Note: Except for the following questions, all the remaining questions have been asked in Set I and Set II.
SECTION A
Question.6. What is Opportunity Cost? Explain with the help of an example.
Answer. See Q. 6, 2012 (I Delhi). II

Question.9. A producer borrows money and starts a business. He himself looks after die business.Identify implicit and explicit costs from this information. Explain.
Answer.

Question.11. What is budget set? Explain what can lead to change in budget set
Answer. The set of all possible consumption bundles of two goods that a consumer can afford given the prices of goods and the income level of the consumer is called the budget set. The budget set changes when either the prices or income of the consumer change. Using M as income, as price of good X, and P2 as price of good Y, a consumer can buy any bundle which he can get by spending M on good X and good Y in the following manner:
\({ P }_{ 1 }X+{ P }_{ 2 }\le M\)
This means money spent on good X and Y should not exceed income. Therefore, if a change takes place in the budget set, it will take place due to change in money variables fulfilling the basic condition stated above.

Question. 12. A consumer buys 8 units of a good at a price of Rs 7 per unit. When price rises to Rs 8 per unit he buys 7 units. Calculate price elasticity of demand through the expenditure approach. Comment upon the shape of demand curve based on this information.
Answer.

According to expenditure method, since the total expenditure does not change, the elasticity of demand will be equal to -1.
In this case, the demand curve will be a rectangular hyperbola.

Question.27. How should the following be treated while estimating National Income? Give reasons.