SECTION A
Question.1. Define microeconomics.
Answer. Microeconomics may be defined as the study of individual decision making units of an economy such,as consumers, firms, etc.’ ” ,

Question.2. What is market equilibrium?
Answer. Market equilibrium refers to the situation where price of a commodity is fixed at a point when quantities demanded and supplied are equal.

Question.3. Define market demand.
Answer. The total demand of a commodity of all consumers at a price during a period of time is market demand.

Question.5. Define ‘Revenue’.
Answer. The money obtained by a firm from the sale of its products is called revenue. 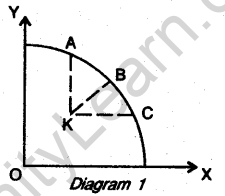 Question.7. A consumer buys 17 units of a good at a price of Rs 10 per unit When price falls to Rs 8 per unit the consumer buys 23 units. Using the expenditure approach, what will you say about price elasticity of demand of the good?
Answer.

If a fall in the price leads to an increase in total expenditure, or when price and total expenditure move in opposite directions, the elasticity of demand is more than 1, i.e. \({ E }_{ d }>1\).

Question.9. Draw Total Revenue Curve and Marginal Revenue Curve of a firm which is free to sell any quantity of the good at a given price. Explain.
Answer. Under perfect competition a firm is free to sell any quantity of its product at a given price which is fixed by the supply and demand of the whole industry. As such AR (price) remains the same all through and because of that AR and MR are equal. Since MR is constant, TR increases at a constant rate.
This is dear from Diagram 2. 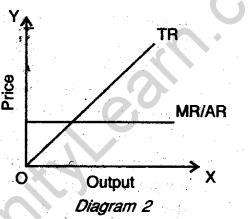 For Blind Candidates only, in lieu of Q. No. 9. Explain the relation between Total Revenue and Marginal Revenue of a firm which is free to sell any quantity it likes at a given price.
Answer. This is a case of perfect competition. Under this market it is a given condition that on the prevailing market price a firm can sell as such as it wants. By implication this means AR (Price) remains constant throughout. As such, AR and MR will be equal and TR will increase at a constant rate. This becomes evident Jacking at the table given below.

Question.10. Explain the implications of the feature ‘freedom of entry and exit to firms’ under perfect competition.
Answer. An important feature of perfect competition is ‘freedom of entry and exit to firms’. This implies that the firms are free to enter the competition as well as leave the competition. As a consequence of that, firms earn only normal profit (AR = AC) in the long-run. If firms are earning abnormal profit (AR > AC), new firms enter the competition with the result output of the industry increases and this reduces the extra profit, Chi the. other hand, if firms are having losses, few firms leave the competition, output of the industry falls, market price increases and losses are eliminated.
Or
Explain the implications of the feature large number of sellers’ under perfect competition.
Answer. Under perfect competition, the number of sellers is very large. It is so large that sellers in individual capacity cannot influence the market prices. They have to accept the price which is fixed by the supply and demand of the whole industry. Therefore each seller (or firm) is a price taker contributing an insignificant proportion of the total industry output.

Question.11. Derive the inverse relation between price of a good and its demand from the single commodity equilibrium condition: ‘Marginal utility = Price’.
Answer. The price and quantity demanded of a good are usually inversely related. This means when price is more, demand is less and vice-versa. This inverse relationship between price and demand can be exhibited using single commodity equilibrium condition.
Marginal Utility (MU) = Price
The law . of diminishing marginal utility states that if we successively go on consuming more units of the same commodity, the utility which we derive from such successive units (i.e., its MU) declines. Knowing this, one will have (or demand) more of a good when its price is less and vice-versa, because now, he is having units yielding less satisfaction. The reverse of it will be true in opposite direction. Thus given the law of diminishing marginal utility, we have downward sloping MU curve and given the equilibrium condition, MU = Price, for a single commodity. The demand curve of the commodity coincides with the MU curve (in the positive quadrant only). As shown in Diagram 3, the equilibrium quantity will be OQ because at this level MU and price of the commodity are equal. 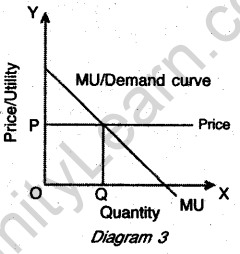 Question.13. What is a supply schedule? Explain how does change in technology of producing a good affect the supply of that good.
Answer. Supply schedule is a two column table which shows quantities supplied corresponding to prevailing prices. When technology of producing a good changes (improves), supply increases implying that more quantity can be supplied at the given price. This becomes clear looking at the supply schedule given below. 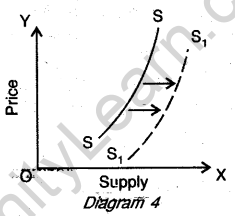 Question.15. Explain the conditions of consumer’s equilibrium with the help of The indifference curve analysis.
Answer. See Q.14, 2010 (I Delhi).

SECTION B
Question.17. Define ‘capital goods’.
Answer. Capital Goods are those final goods which form the capital stock of a country at the end of an accounting year and are used into the production process.

Question.18. Define ‘real’ gross-domestic product.
Answer. Real GDP is the, gross money value at constant prices of the final goods and services .
produced within the domestic territory of country in an accounting year.

Question.20. What are demand deposits?
Answer. These are the deposits which depositors can withdraw from the bank whenever they demand. These deposits are as good as cash.

Question.23. Explain how ‘externalities’ are a limitation on taking gross domestic product as an index of welfare.
Answer. Externalities refer to the benefits (or harms) a firm or an individual causes to another for which they are not paid (penalised). Externalities do not.have any market wherein they can be bought arid sold- Externalities having positive effects are positive externalities and externalities having negative effects are negative externalities.
Positive externalities occur when a beautiful garden maintained by Mr. X raises welfare of Mr. Y even when Mr. Y is not paying for it. There is no valuation of it in the estimation of GDP. Negative externalities occur when smoke emitted by factories causes air pollution, or the industrial waste is driven into rivers causing water pollution.
Environmental pollution causes a loss of social welfare. But nobody is penalised for it and there is no valuation of it in the estimation of GDP.
Impact of externalities (positive or negative) not accounted in the index of social welfare in terms of GDP. To that extent, GDP as an index of welfare is not a price index, it either underestimates or overestimates the level of welfare.

Question.24. An economy is in equilibrium. Its consumption function is C = 300 + 0.8 Y where C is consumption expenditure and Y is income and investment is Rs 700. Find National Income.
Answer.

Question.25. Explain with the help of examples, the distinction between direct tax and indirect tax.
Answer. Direct taxes are those taxes whose real burden is borne by those upon whom these are levied. Income-tax is a direct tax. Its burden cannot be shifted.
On the other hand, indirect taxes are those whose real burden is riot fm in real frame by those upon whom these are levied. Excise duty and sales tax are the examples of indirect taxes. These taxes are levied upon traders and manufacturers but their burden is passed oh to the users of these goods, who ultimately use the goods which are taxed.

Question.27. Explain the ‘economic stability’ objective of a government budget.
Answer. Government can bring in economic stability, i.e., It can control fluctuation in general price level, through taxes, subsidies and expenditure. Inflation and deflation both are not good front economic point of view. Therefore, whenever a country suffers from inflation or deflation, besides other corrective measures, appropriate budgetary steps are taken to remedy the situation.
When there is inflation, government .can reduce its own expenditure. When there is deflation, government can reduce taxes and give subsidies to encourage spending by the people.
Or
Explain the ‘allocation of resources’ objective of a government budget.
Answer. Allocation of resources. Government has to provide for public goods. Public goods such as national defence, government administration etc. are different from private goods. These goods cannot be provided through market mechanism but are essential for consumers arid, therefore, government has to provide diem. Because of that government has to allocate resources between private goods and public goods.
Private goods are limited to some individuals but public goods are available to all. Secondly, private goods are available to those only who can buy them but this is riot the case with regard to public goods. These are available to those also who can not afford them financially.

Question.28. From the following data about a government budget, find out (a) revenue deficit, (b) fiscal deficit and (c) primary deficit.

Question.31. How do commercial banks create credit?
Answer. Commercial banks accept deposits from the general public known as primary deposits and keeping a percentage of these deposits in reserve (known as Legal Reserve Ratio), advance the balance of the deposits to other customers. While advancing them loans banks deposit the amount in their accounts and again keeping a percentage of the deposits (Legal Reserve Ratio), further advance the balance amount to others. This process continues and is known as credit creation by banks. In this way banks create credit many times more than the primary deposits. The phenomenon of credit creation can be explained by taking a hypothetical example, where primary deposit is Rs 1000 and legal reserve ratio (LRR) is 20%. Say, Mr A deposits Rs 1000. Keeping Rs 200 (20%) in reserve, the balance of Rs 800 is advanced as loan to B. Keeping Rs 160 (20% of Rs 800) in reserve, the balance of Rs 640 is advanced as loan to C. This process continues and finally total deposits created are Rs 5,000, i.e. 5 times more. So money multiplier is 5. This process becomes clear, looking at the schedule given below:

Note : Except for the following questions, all the remaining questions have been asked in .Set I.
SECTION A
Question.1. What is a market economy?
Answer. A market economy is one in which central problems are solved through the free forces of demand and supply.

Question.7. A consumer buys 19 units of a good at a price of Rs 11 per unit. When price rises to Rs 13 per unit the consumer buys 17 units. Using the expenditure approach, what will you say about price elasticity of demand of a good?
Answer.

Any position deviating from this position, cannot be sustained economically. If MRS is higher than the ratio of price of commodities X and Y, this cannot be possible because of the given constraint of income.

Question.7. A consumer buys 9 units of a good at a price of Rs 11 per unit. When price falls to Rs 9 per unit the consumer buys 11 units. Using the expenditure approach, what will you say about price elasticity of demand of the good?
Answer.

SECTION B
Question.22. Distinguish between autonomous and accommodating transactions in the balance! of payments.
Answer.