Continents cover 29% of the surface of the earth and the remainder 71% is under oceanic waters.

Alfred Wegener—a German meteorologist put forth a comprehensive argument in the form of “the continental drift theory” in 1912. This was regarding the distribution of the oceans and the continents.

According to Wegener, all the continents formed a single continental mass and mega ocean surrounded the same. The super continent was named PANGAEA, which meant all earth. The mega-ocean was called PANTHALA5SA, meaning all water.

The radiometric dating methods developed in the recent period have facilitated correlating the rock formation from different continents across the vast ocean.

The ocean floor may be segmented into three major divisions based on the depth as well as the forms of relief. These divisions are continental margins, deep-sea basins and mid-ocean ridges.

It was in 1967, McKenzie and Parker and also Morgan, independently collected the available ideas and came out with another concept termed Plate Tectonics. 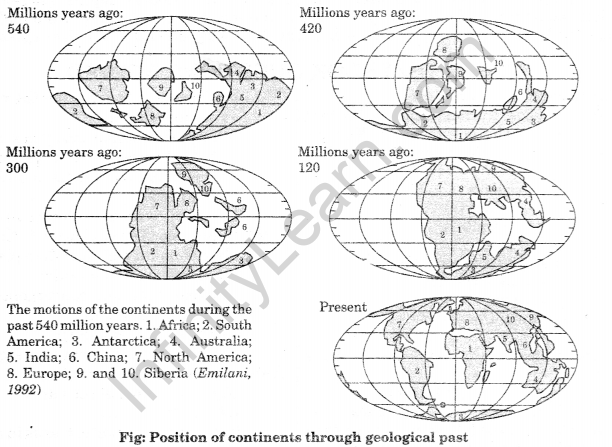 The theory of plate tectonics proposes that the earth’s lithosphere is divided into seven major and some minor plates.