** Answer is not given due to change in the present syllabus

Question 2.
Mention any two steps taken by the Mughals to create the revenue as an administrative apparatus. [2] Answer:

Question 3.
Mention any two arguments given by Balakrishan Sharma for greater power to the Centre. [2] Answer:
Balkrishna Sharma, a member from the united provinces reasoned at length that

Question 5.
“Historians have used a veriety of sources to reconstruct the history of the Mauryan Empire.” Explain. [4] Answer:
Historians have used variety of sources to reconstruct the history of the Mauryan Empire. These include archaeological finds, especially sculpture. Also valuable are contemporary works, such as the account of Megasthenes (a Greek ambassador to the court of Chandragupta Maurya), which survives in fragments. Another source that is often used in the Arthashastra, parts of which were probably composed by Kautilya or Chanakya, traditionally believed to be the minister of Chandragupta. Besides, the Mauryas are mentioned in later Buddhist, Jaina and Puranic literature, as well as in Sanskrit literary works. While these are useful, the inscriptions of Asoka (c. 272/268-231 BCE) on rocks and pillars are often regarded as amongst the most valuable sources. .

Question 6.
“The conception of social pollution intrinsic to the caste system was contrary to the law of nature.” Examine Al-Baruni’s statement on Indian caste system. [4] Answer:
Al-Baruni tried to explain the caste system in India. Looking for parallels in other societies, he noted that in ancient Persia, four social categories were recognised; those of knights and princes, monks, then priests and lawyers, physicians, astronomers and other scientists and finally peasant and artisans. He told that social divisions were not unique in India. He also pointed out that within Islam all men were considered equal, differing only in their observance of piety.

Though Al-Baruni accepted the Brahmanical description of the caste system but disapproved of the notion of pollution. He remarked that every thing which falls into a state of impurity strives and succeeds in regaining its original condition of purity. He insisted that life on earth would have been impossible if sun did not clean the air, and the salt in the sea did not prevent water from becoming polluted. According to him the conception of social pollution, intrinsic to the caste system, according to him was contrary to the law of nature.

Al-Baruni’s description of the caste system was deeply influenced by his study of ndhnative San¬skrit texts which laid down the rules governing the system from the point of view of the Brahmanas. However, in real life the system was not quite as rigid. For example, the categories defined as antyaja (born outside the system) were often expected to provide inexpensive labour to both peasants and zamindars. Though they were often subjected to social oppres¬sion they were included within economic networks.

Question 7.
‘Describe how the ‘Humayunnama’ of Gulbadan Begum gives us the glimpses of the Mughal Imperial household. [4] Answer:
Gulbadan Begum was the daughter of Babur, Humayun’s sister and Akbar’s aunt. She wrote ‘Humayunnama’ depicting the glimpse’of domestic world of Mughal’s. She wrote fluently in Turkish and Persian. When Akbar requested Abul Fazl to write a history of his reign, Akbar requested Gulbadan Begum to record her memories of earlier times under Babur and Humayun, for Abul Fazl to draw upon. She has described in detail the tensions and conflicts which existed between princes and kings. She gives an insight into the important role women played in resolving these conflicts.

Question 8.
Examine how the Ricardo’s idea of land-ownership was introduced in the ‘Bombay Deccan’. [4] Answer:
According to Ricardian Theory, a landowner should have a claim only to the “average rent” that prevailed at a given time. When the land yielded rrjore than this “average rent, the landowner had a surplus that the state needed to tax. If tax was not levied, cultivators were likely to turn into rentiers, and their surplus income was unlikely to be productively invested in the improvement of the land. Many British officials in India thought that the history of Bengal confirmed Ricardo’s Theory. There the Zamindars seemed to have turned into rentiers, leasing out land and living on the rental incomes. It was therefore, necessary the British officials now felt, to have a different system.

The system of revenue that was introduced in Bombay Deccan was known to be ryotwari settlement where unlike the Bengal system, the revenue directly settled with the ryot in which the average income from different types of soil was estimated, the revenue-paying capacity of the ryot was assessed and a proportion of it fixed as the share of the state. The lands were surveyed every 30 years and the revenue rated increased. Thus, the revenue demand was no longer permanent.

Question 10.
Read the following Value-based’ passage and answer the questions that follow :
The 77-year-old Gandhiji decided to stake his all in a bid to vindicate his lifelong principle of non-violence, and his conviction that people’s hearts could be changed. He moved from the villages of Noakhali in East Bengal (present-day Bangladesh) to the villages of Bihar and then to the riot-torn slums of Calcutta and Delhi, in a heroic effort to stop Hindus and Muslims kill each other, careful everywhere to reassure the minority community. In October 1946, Muslims in East Bengal targeted Hindus. Gandhiji visited the area, toured the villages on foot, and persuaded the local Muslims to guarantee the safety of Hindus. Similarly, in other places such as Delhi he tried to build a spirit of mutual trust and confidence between the two communities.
(10.1) Explain how the spirit of mutual trust
and confidence building was initiated by Gandhiji. [2] (10.2) Explain the values mentioned in this passage.” [2]

Question 11.
Discuss how and why were stupas built ? [8] Answer:
Stupas were sacred places because the relics of the Buddha such as his bodily remains or objects used by him were buried there. According to a Buddhist text known as the Ashokavadana, Ashoka distributed portions of the Buddha’s relics to every important towns and ordered the construction of stupas over them. By the second century BCE a number of Stupas, including those at Bharhut, Sanchi and Sarnath had been built.

Inscriptions found on the railings ancP-pillars of stupas. Record donations made by “women and men for building and decorating of stupas. Some donations were made by kings such as Satavahanas, others were made by guilds, such as that of ivory workers who financed part of one of the gate-ways at Sanchi. The people who made donations mentioned their names sometimes adding the name of the place from where they came, as well as their occupations and names of their relatives. Bhikkhus and bhikkhunis also contributed for building those monuments or stupas.

Question 12.
Why was the south-western part of Vijaynagar settlement designated as Royal Centre ? Explain. [8] Answer:

(ii) This pungent remark created lots of commotion in the house. However, Dhulekar proceeded with his speech in Hindi. Nehruji intervened at this crucial juncture to restore peace in the House. But this controversial issue continued to disrupt proceedings of the Constituent Assembly and agitate members over the subsequent three years. On 12 September, 1947 Dhulekar’s speech on the language of the nation once again kicked it huge storm.

(iii) The Language Committee of the Constituent Assembly submitted its report and had thought of a compromise formula as a solution for resolving the deadlock between those advocated Hindi as the National language and those who who were in the opposition. The committee had decided but not yet formally declared that Hindi in the Devanagari script would be the official language, but the transition to Hindi would be in stages. For the first 15 years, English would continue to be used for all official purposes.

(iv) In this way, by considering Hindi as the official rather than the National language, the Language Committee expected to satisfy boiling emotions and reached at a solution that would be acceptable for everyone. Shrimati Durgabai from Madras explained her worries and informed the House that opposition in the south against Hindi was very strong. Many members of the Assembly appealed for a spirit of accommodation as the discussion became bitter. T.A. Ramalingam Chettiar emphasised that “Whatever was done had to be done with caution; the cause of Hindi would not be helped if it was pushed too aggressively. The fears of the people, even if they were unjustified, had to be allayed, or else “there will be bitter feelings left behind.” “When we want to live together and form a united nation,” he said “there should be mutual adjustment and no question of forcing things on people…”

Question 15.
Read the following passage carefully and answer the questions that follow :
Deeds of hire
When debts mounted the peasant was unable to pay back the loan to the moneylender. He had no option but to give over all his possessions — land, carts, and animals — to the moneylender. But without animals he could not continue to cultivate. So, he took land on rent and animals on hire. He now had to pay for the animals which had originally belonged to him. He had to sign a deed of hire stating very clearly that these animals and carts did not belong to him. In cases of conflict, these deeds could be enforced through the court.

The following is the text of a deed that a peasant signed in November 1873, from the records of the Deccan Riots Commission:

I have sold to you, on account of the debt due to you, my two carriages having iron axles, with their appurtenances and four bullocks … I have taken from you on hire under (this) deed the very same two carriages and four bullocks. I shall pay every month the hire thereof at Rupees four a month, and obtain a receipt in your own handwriting. In the absence of a receipt I shall not contend that the hire had been paid.
(a) How did the peasants pay back the loan to the moneylender ? [3] (b) What NATs the deed of hire ? Explain. [3] (c) What light does the deed of hire throw on the relationship between the peasants and the moneylenders ? [3] Answer:
(a)

Question 17.
Read the following passage carefully and answer the questions that follow :
Rules for Monks and Nuns
These are some of the rules laid down in the Vinaya Pitaka:
When a new felt (blanket/rug) has been made by a bhikkhu, it is to be kept for (at least) six years. If after less than six years he should have another new felt (blanket/rug) made, regardless of whether or not he has disposed of the first, then — unless he has been authorised by the bhikkhus— it is to be forfeited and confessed.

In case a bhikkhu arriving at a family residence presented with cakes or cooked grain-meal, he may accept two or three bowlfuls if he so desires. If he should accept more than that, it is to be confessed. Having accepted the two or three bowlfuls and having taken them from there, he is to share them among the bhikkhus. This is the proper course here. Should any bhikkhu, having set out bedding in a lodging belonging to the sangha – or having had it set out – and then on departing neither put it away nor have it put away, or should he go without taking leave, it is to be confessed.
(a) Name any two Buddhist texts in which the rules for the monks have been laid down. [1] (b) Why were these rules framed ? [2] (c) What was the sangha ? Explain ? [2] (d) State any three rules mentioned in the passage, for the bhikkhus. [3] Answer:
(a) 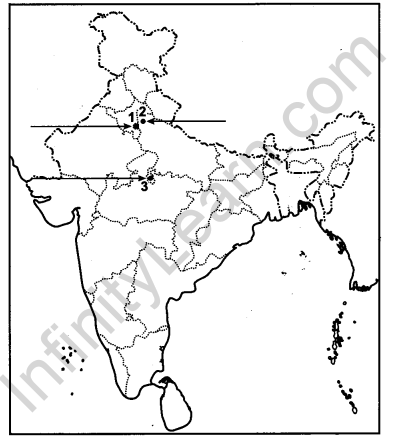 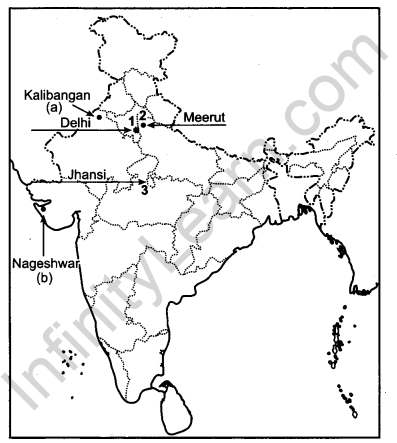