Question 3.
For a reaction R → P, half-life (t1/2) is observed to be independent of the initial concentration of reactants. What is the order of reaction? [1] Answer:
Since half-life is independent of the initial concentration of the reactants. Thus it is a first-order Reaction. The formula for the half-life of the first-order reaction.
t1/2 = \(\frac { 0.693 }{ K }\)

Question 7.
Define the following terms:
(i) Colligative properties
(ii) Molality (m) [2] Answer:
(i) Colligative properties are those which depends on a number of moles of solute irrespective of their Nature.
(ii) Molality is defined as the number of moles of solute dissolved per kg of the solvent. It is independent of temperature. 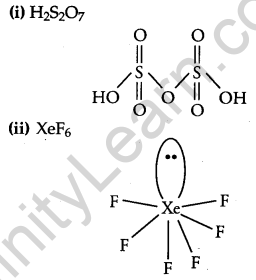 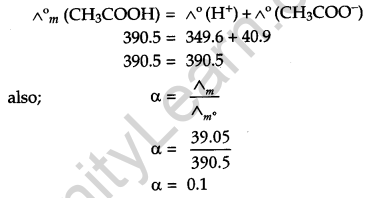 Thus, the degree of dissociation of acetic acid is 0.1. 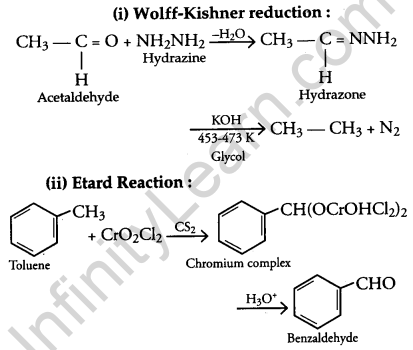 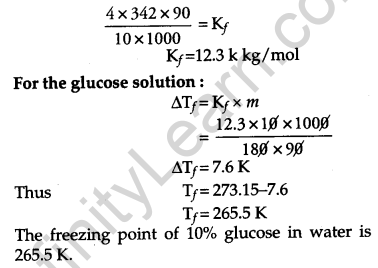 (b) Fuel cell is the cell which converts the energy of combustion of fuels directly into electrical energy.

Question 13.
(i) What type of isomerism is shown by the complex [Co(NH3)6]Cr(CN)6]?
(ii) Why a solution of [Ni(H2O)6]2+ is green while a solution of [Ni(CN)4]2- is colourless? (At no. of Ni = 28)
(iii) Write the IUPAC name of the following complex: [3] [CO(NH3)5(CO3)]Cl.
Answer :
(i) Both shows coordination isomerism because both cationic and anionic entities and isomers differ in the distribution of ligands in the coordination entity of cationic and anionic part.

(ii) In [Ni(H2O)6]2+ Ni is in +2 oxidation state with electronic configuration 3d8. In the presence of weak ligand H2O the two unpaired electrons do not pair up and hence the complex has two impaired electrons. Therefore, it is coloured and shows d-d transitions which absorb red light and emits green complimentary light.
In case of [Ni(CN)4]2- Ni also shows +2 oxidation state but CN ligand is strong ligand and two unpaired electrons undergo pairing, to no d-d transitions takes place and it shows no colour.

Question 14.
Write one difference in each of the following:
(i) Lyophobic sol and Lyophilic sol.
(ii) Solution and Colloid
(iii) Homogeneous catalysis and Heterogeneous catalysis. [3] Answer:
(i) Lyophobic colloidal sols are not hydrated and have a weak affinity with the dispersion medium whereas lyophilic colloidal sols are heavily hydrated and have a strong affinity with the dispersion medium. 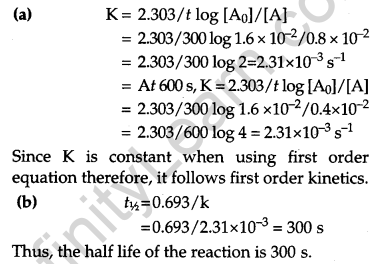 Question 18.
Write structures of compounds A, B and C in each of the following reactions: [3]

OR
Do the following conversions in not more than two steps:
(a) Benzoic acid to Benzaldehyde
(b) Ethylbenzene to Benzoic acid
(c) Propanone to Propene
Answer: 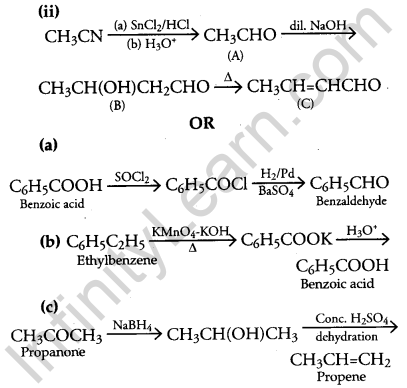 Question 19.
Write the structure of the monomers used for getting the following polymers:
(i) Dacron [3] Answer:
(i) Monomers of Dacron:

Question 21.
Give reasons:
(i) Thermal stability decreases from H2O to H2Te.
(ii) Fluoride ion has higher hydration enthalpy than chloride ion.
(iii) Nitrogen does not form pentahalide. [3] Answer:
(i) As we move down in a group atomic radius increases as a result bond length increases. Larger the bond length lesser will be the bond dissociation enthalpy. So thermal stability decreases from O to Te.
(ii) Fluoride ion is the smallest ion in the group and it has high charge density and charges size ratio. That is why it has a high hydration enthalpy.

Question 24.
(a) Account for the following:
(i) Transition metals form a large number of complex compounds.
(ii) The lowest oxide of transition metal is basic whereas the highest oxide is amphoteric or acidic.
(iii) E0 value for the Mn3+/Mn2+ couple is highly positive (+1.57 V) as compare to Cr3+/Cr2+.
(b) Write one similarity and one difference between the chemistry of lanthanoid and actinoid elements. [5] OR
(a) (i) How is the variability in oxidation states of transition metals different from that of the p-block elements?
(ii) Out of Cu+ and Cu2+, which ion is unstable in aqueous solution and why?
(iii) The orange colour of Cr2O72- ion changes to yellow when treated with an alkali. Why?
(b) Chemistry of actinoids is complicated as compared to lanthanoids. Give two reasons.
Answer:
(i) Transition metals form a large number of complexes due to:

(iii) Because Mn2+ has 3d5 as a stable oxidation state which is half-filled and stable. Mn has very high third ionization energy for change from d5 to d4 but in case of Cr3+, 3d3 is more stable due to completely half-filled t2g orbitals (crystal field spitting theory) and that is why Mn3+ /Mn2+ is highly positive as compared to Cr3+ /Cr2+.

(b) Both Lanthanoids and Actinoids have the t3 oxidation state and both show contraction or irregular electronic configuration while the major difference between the lanthanoids and actinoids is actinoids are radioactive while lanthanoids are not radioactive in nature.
OR
(a) (i) In p block elements the difference in oxidation state is 2 and in transition elements, the difference is 1.
(ii) Cu+ is unstable in aq. solution because it undergoes disproportion reaction and has low hydration enthalpy.
(iii) In alkaline medium dichromate ions Cr2O72- changes to chromate ion CrO42-, which is yellow in colour due to which the colour changes when treated with an alkali.

(b) Chemistry of actinoids is complicated as compared to lanthanoids due to the following reasons:

Question 26.
(a) Write the product(s) in the following reactions: 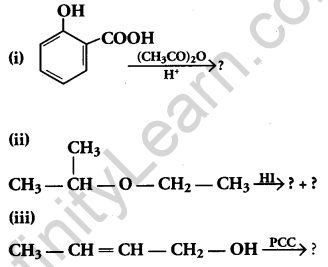 (b) Give simple chemical tests to distinguish between the following pairs of compounds:
(i) Ethanol and Phenol
(ii) Propanol and 2-methyl propane-2-ol [5] OR
(a) Write the formula of reagents used in the following reactions:
(i) Bromination of phenol to 2, 4, 6-tribromophenol
(ii) Hydroboration of propene and then oxidation to propanol. 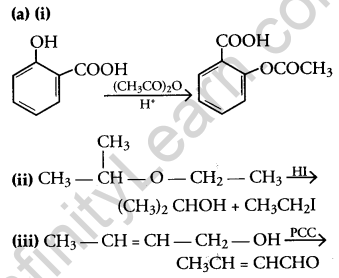 (b) (i) Ethanol and phenol: When neutral ferric chloride is added to both the compounds phenol gives violet coloured complex whereas ethanol does not give this complex when treated with ferric chloride solution.
(ii) Propanol and 2-methyl propane-2-ol: When both the solutions were treated with anhydrous ZnCl2 and conc. HCl (Luca’s test) the 2-methyl propane-2-ol gives the turbidity immediately whereas propanol does not give the turbidity immediately.
OR
(a) (i) Aq-Br2
(ii) B2H6 and then H2O2 and OH- 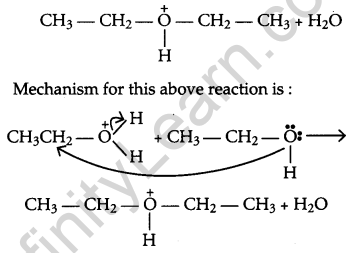 Question 7.
Draw the structures of the following: H3PO2 [2] Answer: 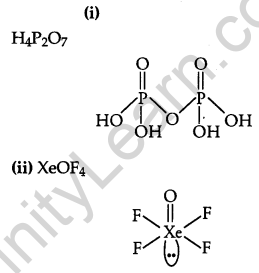 Question 14.
Write the structures of the monomers used for getting the following polymers:
(i) Nylon-6
Answer:
(i) Monomers of Nylon-6: 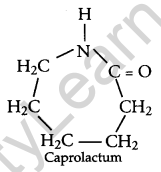 Question 20.
(i) What type of isomerism is shown by the complex [Co(en)3]Cl3?
(ii) Write the hybridisation and magnetic character of [Co(C2O4)3]3- (At. no. of Co = 27)
(iii) Write IUP AC name of the following Complex [Cr(NH3)3Cl3]. [3] Answer:
(i) Since the given coordinate compound does not have a plane of symmetry and the ligand attached is bidentate ligand so it will show optical isomerism.

(ii) [Co(C2O4)3]3- Co is in +3 oxidation state with an electronic configuration of 3d6 Oxalate is a strong field ligand so the pairing of electrons takes place.